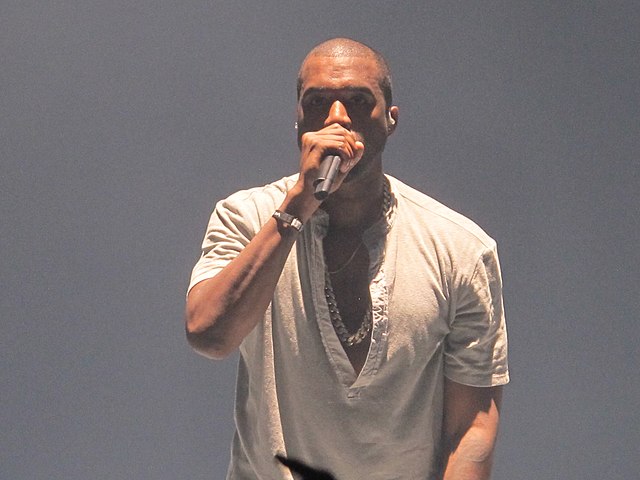 Kanye West, shown in this 2013 photo, was banned from performing at the 64th Grammy Awards ceremony.

On March 19, Variety magazine reported that rapper Kanye West, who is considered one of the most influential rappers of all time, has been banned from performing at the 64th Annual Grammy Awards on April 3.

West was banned from performing at the Grammys after sharing his anger on social media about ex-wife Kim Kardashian’s new relationship with comedian Pete Davidson, and publicly expressing his views on whether or not Davidson should be able to see his children.

“West has lately used his Instagram account to air grievances over custody and child care issues amid his divorce from Kardashian,” the New York Times reported.

According to several media sources, West, who now goes by Ye, shared a post last month on Instagram, mentioning an inappropriate joke that Pete Davidson made about children in 2019. He cited the joke as “…yet another reason why Skete gotta stay away from my children,” going on to write, “Oh and nobody noticed that he ain’t show up to SNL Because Mr. I can help you with meds had a mental breakdown after we ran him off the internet.”

As reported by CNBC and other media outlets, on March 16, West was banned from Instagram for 24 hours. A spokesperson for Meta, which owns Instagram, told CNBC that West “violated the firm’s policies on hate speech and bullying and harassment.”

According to the New York Times, organizers of this year’s Grammy Awards ceremony  “cited West’s erratic and troubling behavior in recent weeks” for their decision not to allow him to perform at the event.

“I gather that the Grammys doesn’t want to be seen as endorsing or taking a chance on Kanye’s erratic behavior of late, specifically his online attacks of his ex-wife and her current partner (Pete Davidson),” said Parke Puterbaugh, a longtime lecturer in Guilford’s music department.

“I can understand this; he does not seem to be emotionally stable or particularly civil, and his personal rage should not be allowed to spill over to the public stage, as did Will Smith’s assault of Chris Rock at the Oscars,” Puterbaugh said. “Enough is enough. Bad behavior should not be (rewarded) with public exposure.”

As reported by the New York Times, West has had a tense history with the Grammys, stating in 2005 that if he did not win the album of the year award, it would be because of his behavior and not his artistic abilities.

West has also criticized other music awards shows. Most famously, during the 2009 MTV Music Awards, he interrupted Taylor Swift’s speech to say that Beyonce had the best music video, a pop culture moment that many still discuss.

In this latest clash with the Grammys, West has received the support of various artists and music personalities such as Damon Dash, former CEO of Roc-A-Fella Records. According to Yahoo News, Dash has stated that Kanye West and other black artists should create their own Grammys.

“I’m not trying to fit into somebody else’s system,” Dash told TMZ on March 22. “So we just create our own so we ain’t gotta worry about nobody else’s rules.”

Guilford sophomore and music major Axel Sandoval shared his thoughts on the situation, saying, “Kanye West is easily one of the biggest rap artists around. It is strange how the Grammys are not allowing him to perform ever. To me, it seems like they are diminishing his mental health issues.”

Trevor Noah of “The Daily Show,” who is hosting the Grammy Awards ceremony tonight, became a target of West’s social media insults last month after talking about West’s treatment of Kardashian and Davidson in a “Daily Show” segment last month. But after Grammy organizers announced that West would be barred from performing at the ceremony, Noah chose Twitter to communicate where he stood: “I said counsel Kanye not cancel Kanye,” he tweeted.