Officers not charged in the case of Daniel Prude’s death 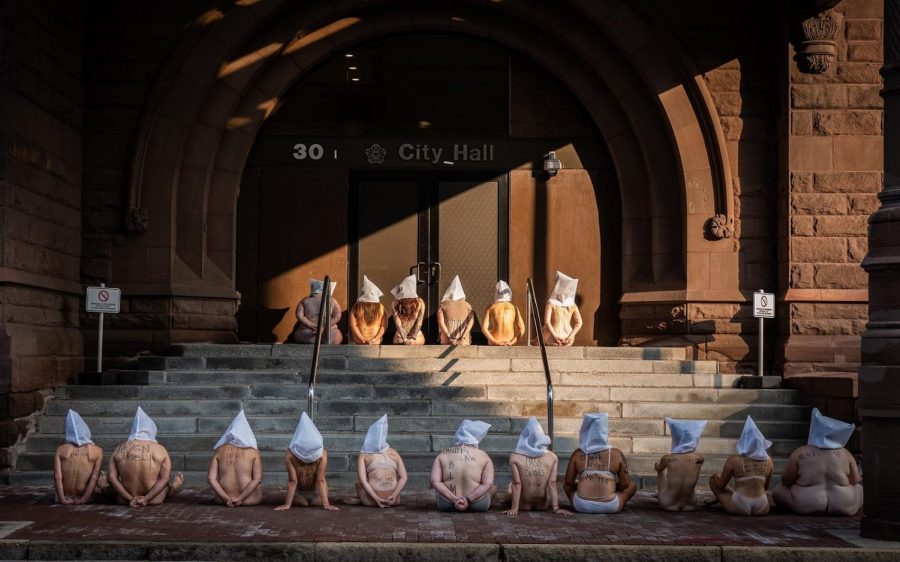 Protesters gather outside the Rochester City Hall on Sept. 2, 2020, to draw attention to the lack of legislation that could have prevented Daniel Prude’s death.

On March 23, 2020, Daniel Prude, a 41-year-old African-American man, was killed by police in Rochester, NY, while naked and experiencing a mental health crisis. On Sept. 2 of the same year, the body cam footage of the event was released and attracted national attention. On Tuesday, Feb. 23, the police officers involved in the incident were cleared of all charges by Monroe County grand jurors.

When the police arrived in southwest Rochester, Prude was naked and bleeding on the street following his release from a mental health facility. Prude complied with officers and laid down on the ground, allowing himself to be cuffed. He then began to spit at the officers, prompting them to put a spit hood on him, and as he started to resist them, they forcibly held his limbs and head down. When officers noticed he wasn’t breathing, Prude was immediately taken to Strong Memorial Hospital. Although his heartbeat was revived in intensive care, Prude’s brain function had not been restored two days later, and he was disconnected from life support.

“Prude’s killing was senseless and unnecessary,” said Guilford senior Brandon Jones. “It’s crazy that this (police brutality against Black men) is still an issue. But I live in America, so should I be even shocked by this point?”

Prude’s cause of death was ruled by the medical examiner as homicide, caused by asphyxiation in conjunction with PCP and “excited delirium.” Excited delirium is a condition not widely recognized by medical doctors which reportedly affected both George Floyd and Elijah McClain at the time of their deaths.

Homer Venters, an MD and former chief of medicine for New York City’s jails, highlighted the relationship between the diagnosis and racism when speaking about George Floyd.

“Excited delirium has a long history of being used to absolve law enforcement of responsibility in the death of people, especially people of color,” he said in an interview for the Marshall Project.

The body cam footage of his death was released to the public in a news conference called by Prude’s family and lawyers, along with racial rights activists. Prude’s family made an open-records request for the body cam footage five months earlier, on April 3, and although the video was eventually given to the family, a reported long chain of miscommunication between city and state officers continued to delay its wider issuing.

“I think the reality is that it probably boils down to an issue of public trust,” said Guilford Justice and Policy Studies Professor Michael Costolo. “Government wants the public to trust them to handle controversial issues impartially and with integrity, (but) when the public calls for transparency and the government declines, regardless of the validity of the justification, it naturally and predictably results in the further degradation of public trust.”

All police officers in the case were suspended with pay, and the city began an investigation into the case. The investigation was undercut by extreme controversy—including the release of documents from the then-Police Chief, La’Ron Singletary, in which he claims the mayor requested that he lie to the City Council regarding his findings on the case—and a general outcry from this year’s burgeoning BLM movement.

On Feb. 23, the grand jury returned a no-bill (meaning that there wasn’t enough information to indict any of the officers) and Attorney General Letitia James announced that the policemen involved in Prude’s death would face no charges.

“I think (this ruling) verifiably shows that the system that was made to support the white man,” said Guilford sophomore Matthew Norton.

Despite the ruling, AG James made the unprecedented decision to release jury records. While this action reflects the general call for transparency in this justice system, some think it could do more harm than good.

“The sanctity and secrecy of the grand jury process is embedded in our laws and we hope that knee-jerk reactions won’t crack the foundation upon which our criminal justice system is based,” said New York Police Union Chief Thomas Mungeer in a statement the day after the ruling.

Since the release of the jury records, Prude’s case continues to develop as justice is navigated, but his death remains irreversible. Prude’s family has recently filed a lawsuit against the city, which could lead to a monetary settlement.

“(If) I had to guess, Daniel Prude’s family will likely find more justice in civil court than they did in criminal,” said Costolo. “That being said, money won in a civil suit is never an adequate substitute for the value of the life lost—and it does not address the trauma the rest of the community experienced in the wake of Prude’s death or the issues that led to the death in the first place.”