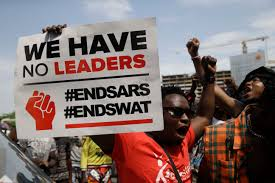 Nigerian protestors call for SARS to be disbanded

With the presidential election looming, and the active threat of the COVID-19 crisis, Americans may overlook issues happening outside our borders.  For the past two weeks, Nigeria’s citizens have been protesting against its police force and its policies, unbeknownst to the U.S. and other countries across the globe.

A police unit called the Special Anti-Robbery Squad (SARS) had been accused of illegal detentions, assaults and shootings. On Oct. 3, a video surfaced which allegedly showed SARS officers murdering a young man in the southern Delta triangle. Nigerians called for the police unit to be disbanded, taking to social media with the hashtag #EndSars.  Demonstrations began across major cities in Nigeria on Oct. 8.

Nigerian President Muhammadu Buhari responded to the protests by dissolving the unit on Oct. 11. However, no real police reforms have occurred, and protests continue.

Although the protests are peaceful, Nigeria’s law enforcement decided to intervene, and in multiple instances have taken it too far. The human rights group Amnesty International reports that since the protests began, at least 56 people have died in multiple shootings across the nation and that hundreds have been severely injured.

In the past few days, there have been reports of military officers and police enacting more violence on peaceful protesters in multiple cities. BBC News reported that on Tuesday, Oct. 20, soldiers opened fire on peaceful protesters, attempting to force them out and away from a neighboring city’s gates. Amnesty disclosed that at least 38 people died on Tuesday alone.

“Victims include protesters and thugs who were allegedly hired by the authorities to confront the protesters,” Amnesty wrote. “In many cases, the security forces had used excessive force in an attempt to control or stop the protests.”

Amnesty International has been monitoring the protests since they began.

“Opening fire on peaceful protesters is a blatant violation of people’s rights to life, dignity, freedom of expression and peaceful assembly,” said Osai Ojigho, the country director of Amnesty International Nigeria. “Soldiers clearly had one intention – to kill without consequences.”

But the human rights group has not been the only one watching these protests, and they’re also not the only ones with a response. President Muhammadu Buhari has spoken on the protests himself, with minimal response from his army.

“I would like to appeal to protesters to note and take advantage of the various well-thought-out initiatives of this administration designed to make their lives better and more meaningful and resist the temptation of being used by some subversive elements to cause chaos with the aim of truncating our nascent democracy,” he said, addressing the nation. “For you to do otherwise will amount to undermining national security and law and order… Under no circumstances would this be tolerated.”

He also spoke directly to the youth of Nigeria, telling them to “discontinue the street protests and constructively engage the government in finding solutions. Your voice has been heard loud and clear and we are responding.”

He has yet to address the mass shootings. The closest response, as reported by BBC, was from the army, who “has not issued a statement on events in Lekki, but in several Twitter posts it described media reports as ‘fake news.’”

As the pandemic rages, casualties are a given, but protesters dying for standing up in the face of injustice need not be. Nigeria’s youth, alongside those in the US, are calling for comprehensive police reform. Change is waiting to happen everywhere, and sooner or later the problem of police brutality must be addressed.

As Ojigo says, “These shootings clearly amount to extrajudicial executions. There must be an immediate investigation and suspected perpetrators must be held accountable through fair trials. Authorities must ensure access to justice and effective remedies for the victims and their families.”