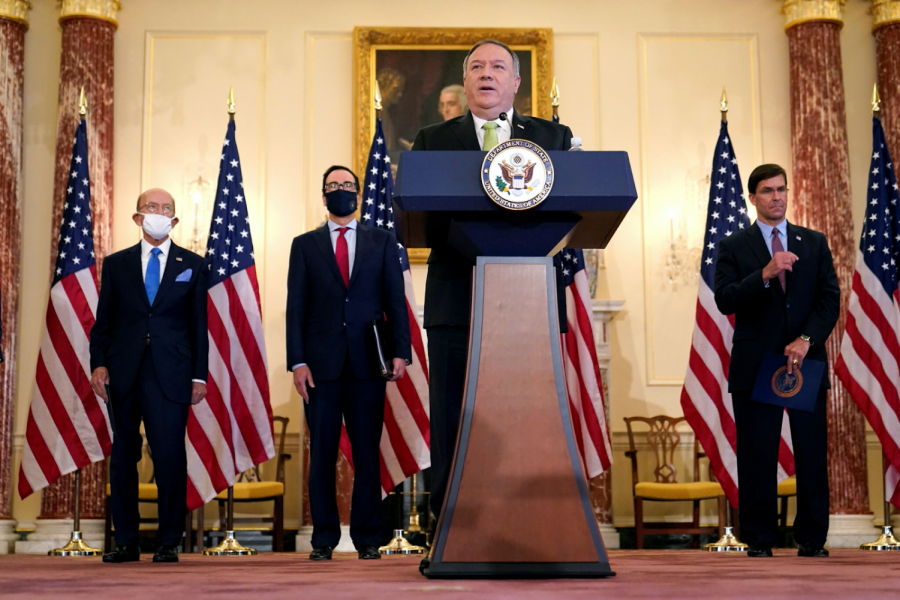 US Secretary of State, Mike Pompeo, is heavily involved in negotiations with the Sudanese government.

At a conference between United States and Sudan officials two weeks ago, the United States discussed the prospect of removing Sudan from the US list of state sponsors of terrorism, as well as providing desperately needed economic aid, if Sudan officialy normalized relations with Israel. This offer has put Sudan, a nation that has regularly shown support for Palestine’s rights to independence, in a difficult position.

The delegates met in Abu Dhabi on Sept. 21, holding talks mediated by the United Arab Emirates (UAE). The push to normalize relations with Israel is part of the Trump administration’s ongoing peace plan to resolve the Arab-Israeli conflict, most recently advanced with the official normalization of the UAE and Bahrain’s relations with Israel in early September.

To encourage the official normalization of relations between Sudan and Israel, the U.S. offered to remove Sudan from their list of state sponsors of terrorism.

Sudan’s removal from the list would qualify them for both “loans from international financial institutions” and “potential foreign investment,” according to Al Jazeera News. These opportunities would help Sudan in terms of renewed economic engagement with the world, and in lifting themselves out of their economic sinkhole.

Sudan has been run by a transitional military and civilian government since the overthrow of autocratic ruler Omar al-Bashir in April of last year, and is nearing economic collapse. According to Turkish international news channel TRT World, inflation in Sudan hit almost 170% last month. The nation has declared an economic state of emergency, only worsened by the deadly, record-breaking floods which have devastated the country since July.

If accepted, the U.S. offer may pose risks in Sudan. An Israeli expert on Africa told Middle East-focused news site Al-Monitor that civil leadership in Sudan struggles to formally renew ties with Israel “mostly because of the Palestinian issue.”

Sudan has historically been a supporter of Palestine throughout the centuries-long Israeli-Palestinian conflict, and General Abdel Fattah al-Burhan made a statement in February, ,after a meeting with Israel’s prime minister, that their position towards the Palestinians’ right to set up their own state “remained and will remain firm,”

This issue is even more prominent considering Sudan’s fragile governmental state. As reported by The Washington Post, Sudan negotiators fear that a rushed recognition of Israel will turn popular support away from the government.

United States Secretary of State Mike Pompeo has the authority to remove Sudan from the list of US sponsors of terrorism. “Linking the lifting of Sudan from the terror list with Israel normalization is pure blackmailing,” a senior member of the Sudanese civilian government told The Washington Post.

Since processes to remove Sudan from the list have been under way for longer than a year, attaching it as a reward for normalizing relations is seen by some as an undermining of the Sudanese government.

After three days of negotiations, no solid agreement on the size of the aid nor on Sudan’s decision to normalize relations was made. However, al-Burhan said in a statement that the talks were “useful.”

At a glance, it looks as though the United States is pressuring Sudan to normalize relations with Israel with the incentives of removal from their list of state sponsors of terrorism and unlocking financial aid that will save them from economic collapse. However, Sudan’s deeply embedded ties to Palestine further complicate the decision of whether or not to accept this offer, and diplomatic relations are never straightforward.