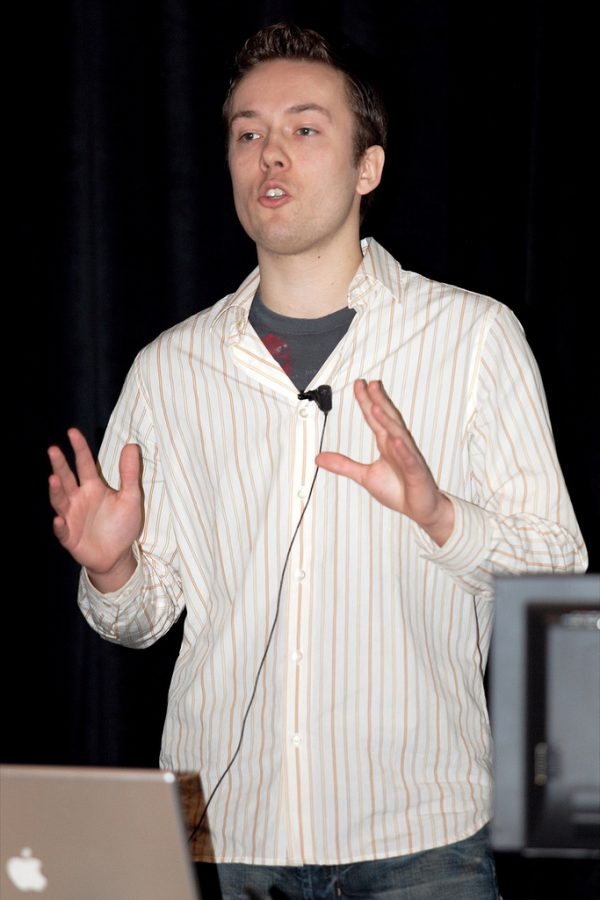 An image of David Hansson, a programmer, speaking at a tech conference in California.

Apple and its corporate partner Goldman Sachs have been implicated in a regulatory investigation of credit allotment practices following a controversial Twitter thread from an entrepreneur.

Danish software developer David Hansson shared that his Apple Card credit limit was 20 times that of his wife Jamie Hansson, in spite of their joint income and her higher credit score.

“My wife and I filed joint tax returns, live in a community-property state, and have been married for a long time,” Hansson tweeted. “Yet Apple’s black box algorithm thinks I deserve 20x the credit limit she does.”

This prompted rumors that the Apple Card algorithms many use gender as a determining factor for credit card limits. Others shared their experiences, including Apple Co-Founder Steve Wozniak.

“The same thing happened to us. We have no separate bank accounts or credit cards or assets of any kind,” said Wozniak. “We both have the same high limits on our cards, including our AmEx Centurion card. But 10x on the Apple Card.”

Launched in August of 2019, the Apple Card works with iOS applications such as Wallet and Apple Pay to yield credit services for users. Goldman Sachs functions as the issuing bank and Mastercard provides the payment network.

Ken Gilmore, a professor of political science at Guilford, believes that sexism in the Apple Card algorithm is possible.

“Gender may be part of their algorithm,” he remarked. “Algorithms aren’t written by robots, they’re written by human beings.”

After David and Jamie Hansson filed a formal complaint, Jamie Hansson’s credit limit was increased, but David’s tweets piqued the attention of Linda Lacewell, the superintendent of New York’s State Department of Financial Service (NYDFS), who remarked on the importance of investigating the algorithm in a post on Medium.

“DFS wants to work with the tech community to make sure consumers nationwide can have confidence that the algorithms that increasingly impact their ability to access financial services do not discriminate and instead treat all individuals equally and fairly,” Lacewell said.

Lacewell also shared that the NYDFS is currently looking into possible discriminatory algorithms used by another corporation.

As the inspections continue, Goldman Sachs has denied all allegations. In response to questioning from an Apple representative, Andrew Williams, a spokesperson for Goldman Sachs, said that credit limits were determined individually based on multiple factors.

“Our credit decisions are based on a customer’s creditworthiness and not on factors like gender, race, age, sexual orientation or any other basis prohibited by law,” Williams said.

To combat the issue, Apple and Goldman Sachs have agreed to examine unexpectedly low credit limits on a case-by-case basis.