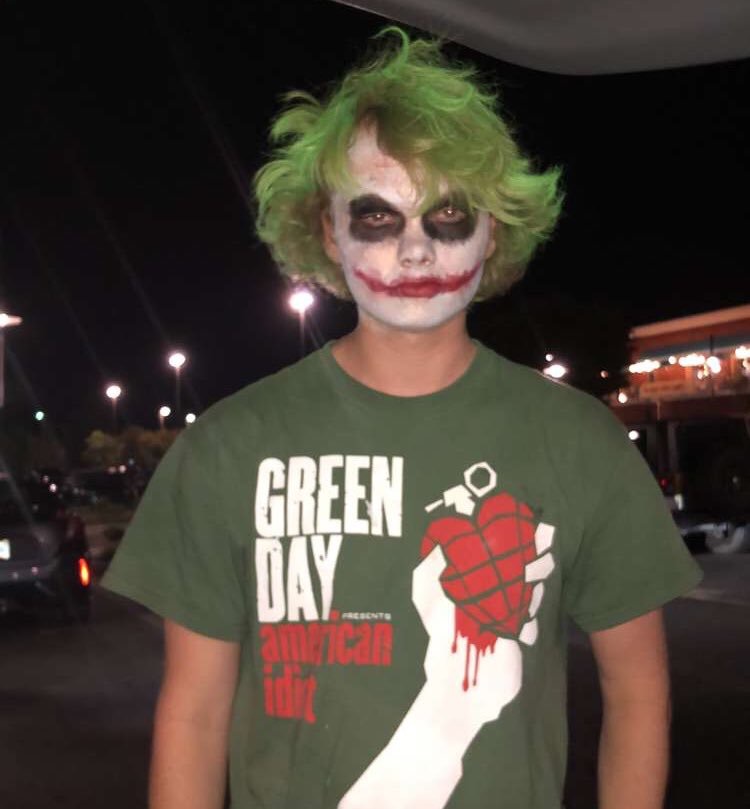 Caleb Youngdahl, pictured above in his Joker costume, was followed by a security officer at a theater in High Point and eventually had to remove the makeup because of safety concerns.

With the release of new hit movie “The Joker” comes some enthusiastic fans.

Serious fans dressing up for major movie releases has become somewhat of a common occurrence at theaters across the country, and now people are getting kicked out of movie theaters for wearing Joker makeup and costumes.

“I showed up in Joker makeup mainly because I thought it would be funny to see people’s reactions,” said Caleb Youngdahl, an Early College student who went to the Regal Palladium Cinema in High Point, N.C., with Joker makeup and green-dyed hair. “Since I did it on opening night, I figured that there would be many other fans who would do the same thing, and it would be a fun time.”

Masks, face paint and costumes that conceal faces are among theaters’ concerns, which stem from the 2012 Aurora shooting. At some theaters, cops circulated on opening night to ensure that nothing out of the ordinary occurred.

“I was wrong about other people showing up in Joker makeup,” said Youngdahl. “When I walked inside the theater, the manager immediately insisted that I wash off the makeup, and I was escorted to the bathroom by a police officer.”

Like several other enthusiastic teenagers on opening night, Youngdahl was informed by the police officer about the theater’s strict no-makeup policy for the film’s screening.

“If I didn’t know him, I would’ve most likely assumed that he was just really enthusiastic about the movie,” said Fenway Donegan, a student who accompanied Youngdahl to the theater. “I think the cop was overreacting, and while I understood that it was probably explicitly stated that he had to do that, it just feels like it was creating a needless sense of fear around Youngdahl. It almost made him seem like more of a danger just because he had a cop tailing him.”

The policy is due in part to a mass shooting that occurred in 2012 in Aurora, Colorado, during a screening of “The Dark Knight Rises.” Witnesses reported that the shooter dressed as and called himself “the Joker” according to CNN. He set off tear gas grenades and shot at the audience with firearms, killing 12 people.

The potent rumor that he was dressed as the Joker has provoked fears, especially now with the release of “The Joker,” that there will be copycat killers, and talk of the tragedy has made the rounds again.

“I understand where the fear is coming from that certain individuals will get inspired from the movie and commit a tragic act of violence,” said Youngdahl. “But I think it’s founded much more in fear than in fact.”

As investigators revealed that the Aurora shooter, James Holmes, was not actually in costume but rather tactical gear, some believe the movie’s connection to the shooting is nonexistent.

“I feel that the connection to the Aurora shooting was tenuous at best, because James Holmes only chose ‘The Dark Knight Rises’ premier presumably because it had a large crowd,” said Donegan. “Holmes was not in makeup or costumes, instead in tactical gear, so I do not understand the fear around people wearing makeup or costumes. While the shooting was a tragedy and steps should be taken to prevent more in the future, I do not feel that stigmatizing people that just want to dress up for a movie is the right way to go about solving that.”

Aside from the costume and makeup controversy, families affected by the Aurora shooting have expressed concerns about “The Joker” itself, which depicts the main character as a disturbed loner who turns to violence. Sandy Phillips, whose 24-year-old daughter was killed in the Aurora shooting, turned to the media (TIME Entertainment).

“My worry is that one person who may be out there –– and who knows if it is just one –– who is on the edge, who is wanting to be a mass shooter, may be encouraged by this movie,” said Phillips. “And that terrifies me.”

However, others feel that there are no problems surrounding “The Joker” that people should worry about.

“I don’t understand where the controversy came from, especially because all it did was just seem to further stigmatize people that just wanted to go and enjoy a movie,” said Donegan. “It seems completely fabricated. Nothing happened, and there were no reported threats of violence. It appears that the media concocted a controversy around nothing.”

“The only connection I see between the movie and the Aurora shooting is that they both loosely relate to Batman in a twisted sort of way,” Youngdahl added. “While it’s true that ‘The Joker’ is a violent movie, there are many other movies out there that are just as violent that have not triggered horrific events.”

Despite the controversy surrounding the nature of it, the film still made a huge debut in the box office, earning $93.5 million on its opening weekend, according to Vox. “The Joker” also had the fourth largest opening for an R-rated movie in history.

As reported by Entertainment Weekly, “The Joker” has become the highest-grossing R-rated film of all time at the worldwide box office, earning $788.1 million and surpassing the record set by “Deadpool.”

Outside of the success of “The Joker” and the tragedy of the Aurora shooting, it is important that all movie-goers maintain a sense of vigilance and work with security officers to ensure that an excursion to the theater remains lighthearted.

Editor’s note: This story originally was published in Volume 106, Issue 4 of The Guilfordian on Nov. 1 2019.