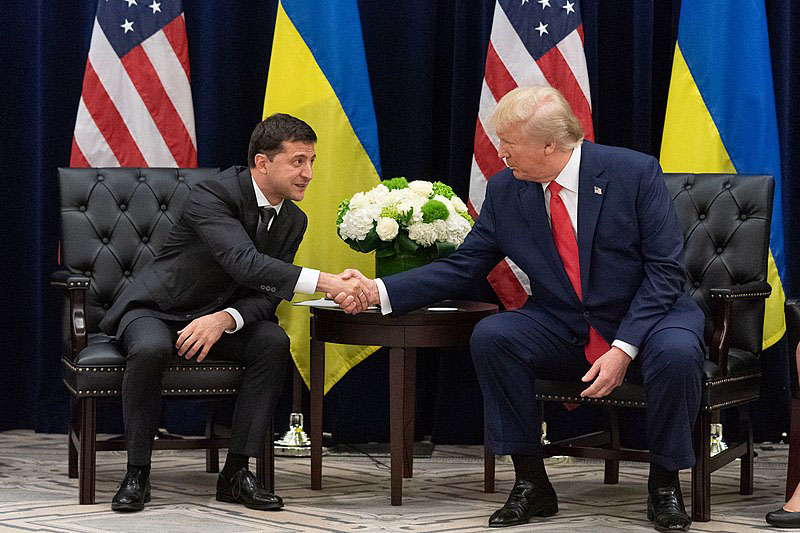 In the world of politics, U.S. President Donald Trump has been called into question for an impeachment inquiry due to his involvement in a phone call with the Ukrainian president, Volodymyr Zelensky, about the investigation of Joe Biden’s son.

Students at Guilford weighed in on the situation, discussing if impeachment proceedings against Trump should occur in the future.

“I feel like personally he’s gotten away with a lot more than other presidents have,” said Genevieve Brindle, a first-year student.

The allegations against Trump made by an anonymous whistleblower have caused some concerns for the upcoming 2020 presidential election.

Rumors of possible impeachment have caused other politically-affiliated figures, such as Nancy Pelosi, to demand a full inquiry into Trump’s actions.

Concerns of “tampering” have been prominent since the presidential election in 2016 and new allegations are renewing them. Damon Akins, a history professor at Guilford, discussed whether or not he considers Trump’s actions to have an influence on the upcoming election.

“It is clearly an attempt to tamper with the election by using his power as a president to seek political favors from foreign governments,” Akins stated.

Updates on the account are provided daily, each story bringing to light a new issue, including likely splits in the Republican Party and another whistleblower who has been identified by investigators.

If Trump is indeed impeached, Vice President Mike Pence would have to step into his place. Dana Beck, a student at Guilford, expressed her opinion on this possibility.

Though members of the Guilford community may disagree about the impeachment allegations, there is a general consensus that authorities need to move forward and call Trump into question. They believe that something needs to be done about standing queries.

“I think there should be a full inquiry,” Akins stated. “What Trump has already said and done publicly is enough to justify that.”

Recently, a full transcript of the phone call was released, among other updates. The exact words of the president were recorded for the world to peruse. This could serve as a solid basis for further investigation into the whistleblower’s allegations. Notions of further examination were received well by Guilford students.

“I support them,” said Beck. “I think the way (Trump) has conducted himself has magnified the poor decisions he’s made.”

While some believe this inquiry could end Trump’s presidency, others explain why it may be insignificant.

“I feel since most of our government is Republican fun, the majority vote will keep Trump in office,” Brindle stated.

Trump recently claimed that his motivation for promoting investigation into the Bidens was not centered around politics. Rather, he stated that it was merely for “anti-corruption.”

Most people still believe that Trump will be unable to escape this inspection and will face repercussions for his actions.

“It’s just like cheating on a test,” Beck said. “He doubts himself so much that he needs help from an outside source.”

As the presidential election of the United States will occur in November of 2020, the House of Representatives has an ample amount of time to decide whether or not to impeach Trump and pursue further questioning.