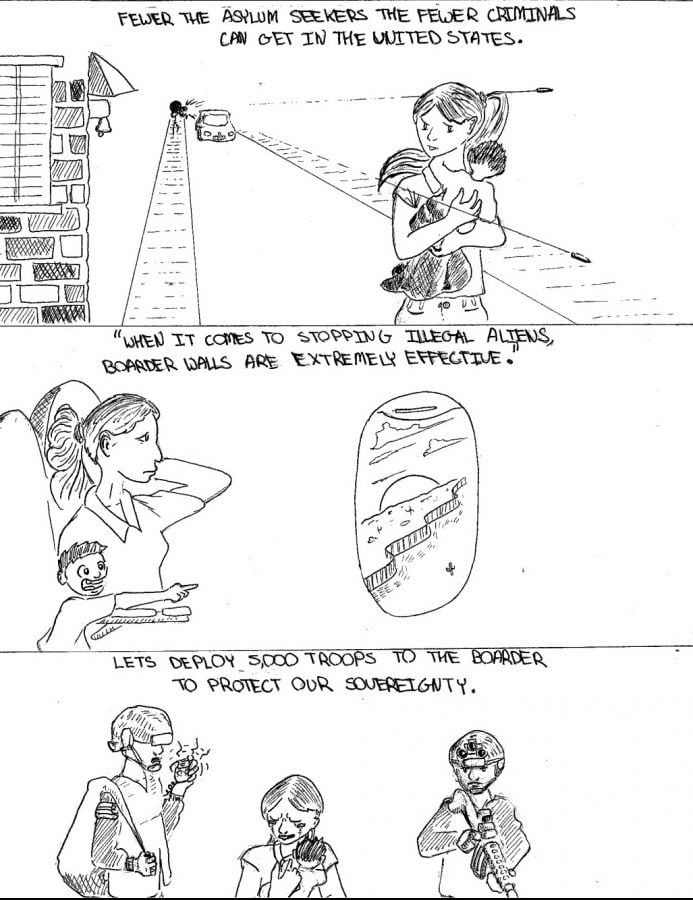 In February, there were more migrants who were apprehended or turned themselves in to authorities in order to apply for asylum at the U.S.-Mexico border than there have been in 12 years.

A Department of Homeland Security official told CNN that there were 10,000 migrants making their way to the U.S.-Mexico border in early February, although they didn’t appear to be traveling in caravans.

By the end of the month, at least 66,500 migrants were apprehended at the U.S. border, the majority from Guatemala, El Salvador and Honduras, countries which are rife with gang violence and political corruption.

According to a report from the Robert Strauss Center’s Mexico Initiative and the Migration Policy Center, 5,000 migrants are currently waiting to present their claim for asylum. The response from the Trump administration has been strict. Citing the dangers of allowing cartels and criminals to cross open borders, the administration has reinforced border security, put in place a practice called “metering”, which limits the number of migrants who can seek asylum each day, and will now begin construction of a wall along parts of the southern border.

“When you add on the current political climate, I would say it’s unacceptable,” said senior Amelia Wellman.

The Department of Homeland Security, which is in charge of overseeing border protection, is enthusiastic about the president’s support.

“Walls work.” said a Dec. 18, 2018 Department of Homeland Security press release. “When it comes to stopping drugs and illegal aliens from crossing our borders, border walls have proven to be extremely effective.”

In April 2018, the administration placed 2,000 border patrol agents in an operation known as Guardian Support. In October 2018, 5,000 troops were sent to reinforce the border, placing the administration’s actions in a legal gray area. The 1878 Posse-Comitatus Act limits the ability of the government to use military troops to enforce domestic laws, but Trump has defended the action as necessary to counter what he sees as a wave of undocumented immigration.

“The administration is making a huge news story out of the crisis at the border,” said Pulitzer Prize winning photojournalist Don Bartletti at a keynote speech for the American Press Conference at La Jolla, California. Bartletti spent years photographing and documented migrants on their journey north.

The migrants without documentation come seeking asylum, a status granted to those who can prove that they face persecution from their governments, or that their governments fail to protect them from persecution. Gaining asylum is a long and complicated process which will likely involve facing time in an immigrant detention center, multiple hearings with judges, and finding a sponsor. Migrants waiting on asylum status cannot find permits to work, so they must either do so illegally or find an organization willing to pay for their cost of living while they await being granted asylum.

Some of the migrants are women fleeing domestic abuse. In Guatemala, it is a well-documented fact that police officers often do not prosecute male domestic abusers. Some observers have criticized the inwardness of the Trump administration.

Mexico has also been taking action to deal with the influx of migrants. From Jan. 17 through Jan. 19, the Mexican government issued 12,000 special humanitarian visas on the Guatemalan border, allowing migrants the right to live and work anywhere in Mexico. The left-wing Mexican president, Manuel Lopez Obrador, has sought to track migrants moving through Mexico. Recent statements suggest that he will be more cooperative with the United States on controlling undocumented immigration. In a break from their previous policies, the Obrador administration has blocked groups of migrants at the border, refused to allow migrants on international bridges to apply for asylum in the United States and allowed the Trump administration to send 120 migrants to Tijuana.

Obrador claims that the shift is a political move to avoid angering the Trump administration. The U.S. is Mexico’s largest trading partner, and Mexico is the U.S.’ third largest trading partner. Keeping healthy relations with the United States is essential for Mexico to attract investment and continue trade with U.S. corporations and consumers. Undocumented immigration has been a tremendous source of tension between the two countries. The American and Mexican governments announced recently that they would begin a “Remain in Mexico” program as part of the effort to combat undocumented immigration.