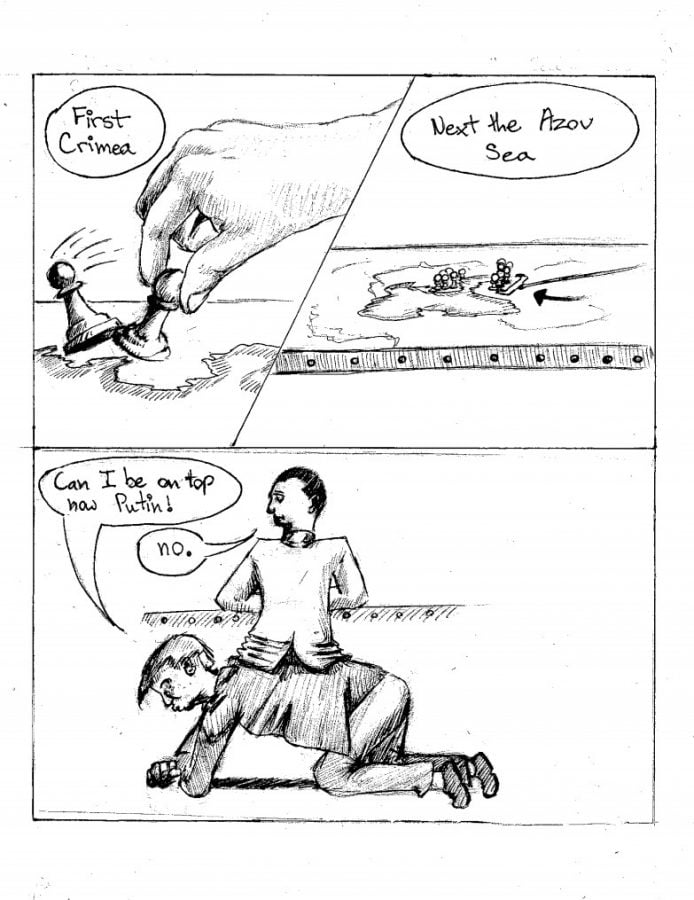 Ukraine’s President, Petro Poroshenko, said on Dec. 3 he would propose that Parliament declare martial law in the country after the Russian military attacked and seized three Ukrainian navy ships in the Black Sea. The Ukraine government has since imposed martial law on 10 of its 25 provinces in response to external military threats from Russia.

The Russian Federal Security Service, known as the FSB, released a statement on Nov. 26 regarding the causation of the confiscation of the ships. The statement declared that three ships, one tugboat and two artillery vessels, illegally entered Russian waters on Sunday in the Black Sea near the Kerch Strait, the main passage to the Sea of Azov from the Black Sea. Russian officials claim that the ships did not have permission to enter the waters, then proceeded to continue after the FSB told them to stop. In a final effort at diverting the ships, Russian soldiers fired upon the vessels as a warning and in order to forcibly stop the Ukrainian Navy from advancing.

Since this report, video footage has been released from a camera on one of the Russian ships that apprehended the Ukrainian vessels. In the video, a Russian soldier, presumably a high-ranking individual, can be heard shouting vulgar commands at the captain of the ship to ram into the side of the Ukrainian tugboat. In the video, the Russian ships appear to be moving at a much higher speed than the tugboat, while steering toward the vessel in hope of a collision.

The FBS eventually seized all of the vessels and soldiers involved in the event.

This clearly intentional collision between the Russian vessel and the tugboat was not referred to in the statement by the Russian Officials on Nov. 26, and instead was called an event of ‘militaristic aggression’ by Ukraine, which put martial laws into place in almost a dozen of their provinces.

“Russia once again appears to be overstepping their boundaries in Crimea,” said junior Beka Bililign. “But I can’t say that I’m surprised.”

Martial law is the overriding of ordinary law by a military force, typically in response to a temporary emergency. Since the annexation of Crimea, the freedom of navigation through the Kerch Strait has become a major concern and goal for Ukraine.

On top of the martial law declaration, Poroshenko, the U.N. and NATO have issued statements condemning Russia’s actions, saying the Russian Federation violated a 2003 bilateral treaty that opened passage through the strait. “The United Nations is deeply concerned about this escalation of tensions, which is taking place in the broader context of the conflict in eastern Ukraine and the annexation of Crimea,” said Under-Secretary-General for Political Affairs at the U.N. Rosemary DiCarlo at a briefing.

Observers predict that conflict is likely to heighten.

“Unfortunately, conflict will continue to heighten between Russia and Ukraine,” said Professor of Peace and Conflict Studies Zulfiya Tursunova. “So far there has been no peace agreement and no direct dialogue of the superpowers with Russia to identify conflict resolution strategies to escalating tensions.”

As for the U.S. government’s response to the conflict, President Trump had scheduled a meeting with Russian President Vladimir Putin at the G-20 Summit in Argentina, although President Donald Trump cancelled that meeting. Without a condemnation report from Trump and an effort for the defense of international law, the U.S. is not currently pressuring Russia to return Ukrainian ships or rights to the Sea of Azov.

“I find it quite interesting with the current state of political affairs in the Trump administration,” says Early College student Elena Carabeau, “With the current Russia investigation by Robert Mueller, it is no wonder to me that Trump doesn’t want to get involved in Russian affairs, especially if he would take Putin’s side.”