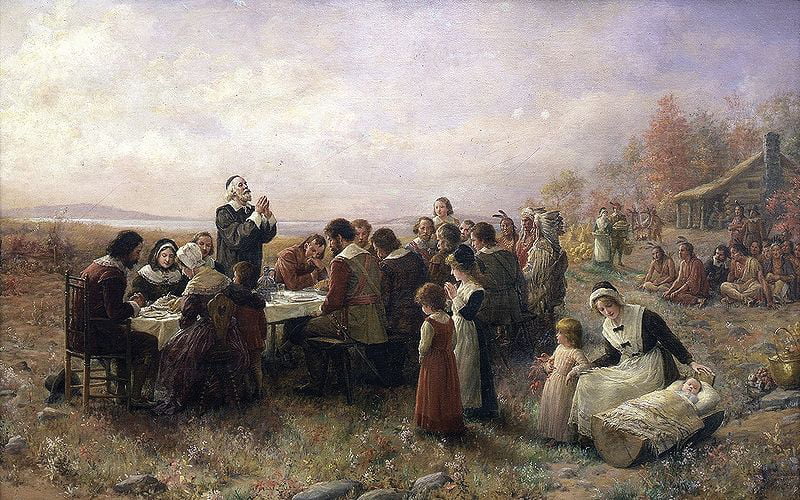 The story told about Thanksgiving in most American schools is quite idyllic. Native Americans and Pilgrims gathered to celebrate overcoming their mutual hardships by partaking in a lively harvest festival feast together. Maybe you had to be in a play about it where you played an insensitive caricature of a Native American who taught the Pilgrims how to farm squash, or perhaps you learned about how the buckle hat-clad Pilgrims fled their homeland because of religious persecution.

The dominant narratives regarding Thanksgiving are largely inaccurate; sorry to rain on your Thanksgiving Day Parade. According to Wheaton College historian Robert Tracy McKenzie, neither the Pilgrims or Native Americans even considered what they celebrated to be a Thanksgiving, which is a Protestant holy day dedicated to prayer, not a feast “centered on military drills and barbecue.” There was no turkey and no pie, and the relations between the area’s Native American tribes and Pilgrims was far more violent than school suggests.

It would be inaccurate to refer to the three-day celebration of a successful harvest that some members of the Wampanoag tribe attended in 1621 as the first Thanksgiving. In fact, it wasn’t even called Thanksgiving until New Englanders in the early nineteenth century retroactively dubbed it as such, believing the celebration resembled their contemporary Thanksgiving. It was not until 1863, when Abraham Lincoln deemed Thanksgiving a holiday to celebrate Union Civil War victories and boost morale, that it was even nationally recognized.

Then there are the more abhorrent sides of Thanksgiving your high school textbook likely glossed over. Tisquantum, or Squanto, a member of the Patuxet band of the Wampanoag tribe and lauded as a translator who taught Pilgrims how to fend for themselves, was sold into slavery by the English in 1614 and returned to America to find his band died of smallpox.

There isn’t even any evidence that suggests the Pilgrims invited the Wampanoag to the feast, says Kate Sheehan, spokeswoman for the Plimoth Plantation, a living history museum in Plymouth.

“I was taught (Thanksgiving) was this peaceful, voluntary transaction that marked the beginning of this mutually beneficial interaction between Pilgrims and Native Americans,” said sophomore Hazel Wechsler. “This Thanksgiving I learned that it is the celebration of a massacre of Native Americans. It feels kind of like a dancing on their graves.”

Indeed, one theory regarding Thanksgiving’s inception is that the holiday stemmed from the massacre of Pequot people in 1637. The day after European mercenaries attacked a village and killed 700 Pequot men, women and children, it was announced that, “this day forth shall be a day of celebration and thanksgiving for subduing the Pequots.” The governor of Plymouth, William Bradford, effusively detailed the massacre in his journal, saying, “It was a fearful sight to see them thus frying in the fyer, and the streams of blood quenching the same…”

Sophomore Ian Gordon’s family did not observe Thanksgiving in light of transgressions made by European colonizers against Native Americans.

“In school, you’re taught that Thanksgiving was a coming together of Native Americans and Pilgrims, and it was supposedly a symbol of unity,” Gordon said. “My dad is Native American, so I always thought, ‘That’s not true.’ My dad always said, ‘We don’t celebrate (Thanksgiving). That’s not our holiday.’”

While the origins of our modern Thanksgiving may be obscured, many believe it paints a false narrative of the relations between Native Americans and European colonizers.

“Pilgrims came over here because they knew there was land, and lots of it. They terrorized Native Americans and framed them as savages,” said sophomore Echo McLachlan. “I think (Thanksgiving) represents the idea of white supremacy, eurocentric values and pushing those values on other people. I think it represents carnage. I think there needs to be a recontextualization of what Thanksgiving is and what it’s about.”

Gordon believes the legacy of Thanksgiving in America is sanitized, erasing the violence against Native Americans.