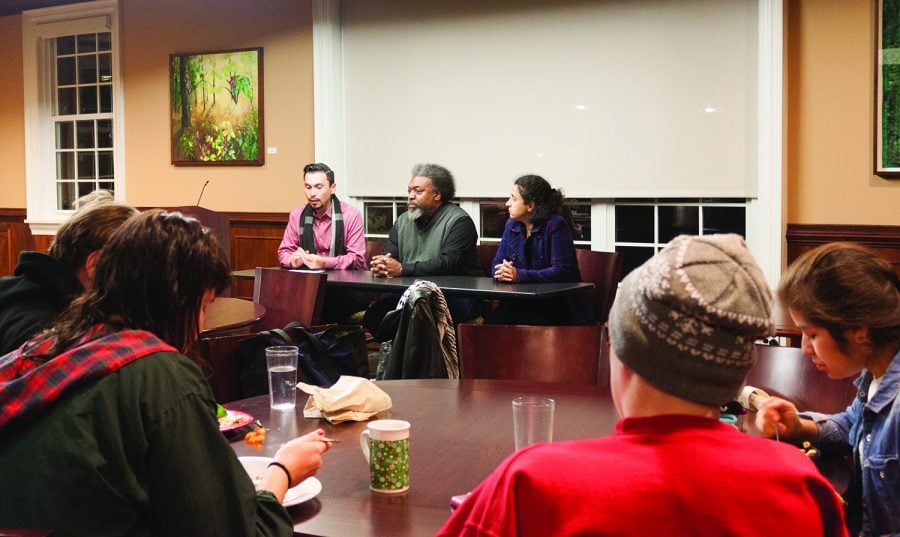 Irving Zavaleta Jimenez ’08, assistant director for the multicultural education department, James Shields ’00, director of the Bonner Center for Community Service and Learning and Diya Abdo, associate professor of English, served as panelists during a dinner conversation about immigration issues that took place on Monday, Nov. 20 in the Gilmer room. // Photo by Fernando Jiménez/The Guilfordian

On Nov. 20, from 6:30 p.m. to 7:30 p.m. in the Gilmer room, the Honors Program and OSLE hosted a dinner and discussion on the topic of immigration justice at Guilford. The speakers in attendance were Associate Professor of English Diya Abdo, Assistant Director of Multicultural Education Irving Zavaleta Jimenez and Director of the Bonner Center for Community Service and Learning James Shields. They discussed issues that refugee students must endure during the process of coming and staying in the United States.

“People are scared, and they have been scared before Trump was even elected,” said Zavaleta Jimenez “People will put fear in you to stop you from fighting for social justice, and that is when you should fight for it the most.”

Joining in the emotional conversation were numbers which played a significant role throughout the discussion. This component was important for discussion, as the United States is home to 46.6 million people born outside the country, and the whole world has an estimated amount of 65.3 million refugees.

“North Carolina is number two on the Eastern Seaboard with refugee resettlements, and number eight in the USA,” said Abdo.

The discussion soon became a touching subject for those attending the conference, and an issue often perceived as something the world would tell on the news was personalized to a knock on Guilford College’s own front door.

Many other issues that seemed to be forgotten on both a smaller and larger scale were acknowledged by Zavaleta Jimenez.

“PTSD is very real for immigrants crossing the borders, and they really downplay that risk,” said Zavaleta Jimenez.

“Being a DACA recipient with all of this going on, I wanted Trump to just terminate it immediately,” he said. “The uncertainty was just too much to handle for me.”

This feeling is something that many Dreamers, or immigrants that arrived in the U.S. as children, around the country and a few attending the dinner have been feeling with their undetermined futures hanging in the balance.

“It is not just the student who is the Dreamer but it is also the family,” said Shields. “It really has been such a blessing to be able to be doing this work, and it is hard sometimes.”

Shield’s statements were met with several nods in agreement from the audience.

Another point of attention during the discussion was the failure of the educational system concerning refugee students.

“I am not going to be happy until the school systems recognize the challenge it is for immigrant and refugee students to get an education,” said Shields.

The occasion continually raised the question that was asked by Zavaleta Jimenez when the meeting first began, “What are we doing, as members of the Guilford community, for immigration justice?”