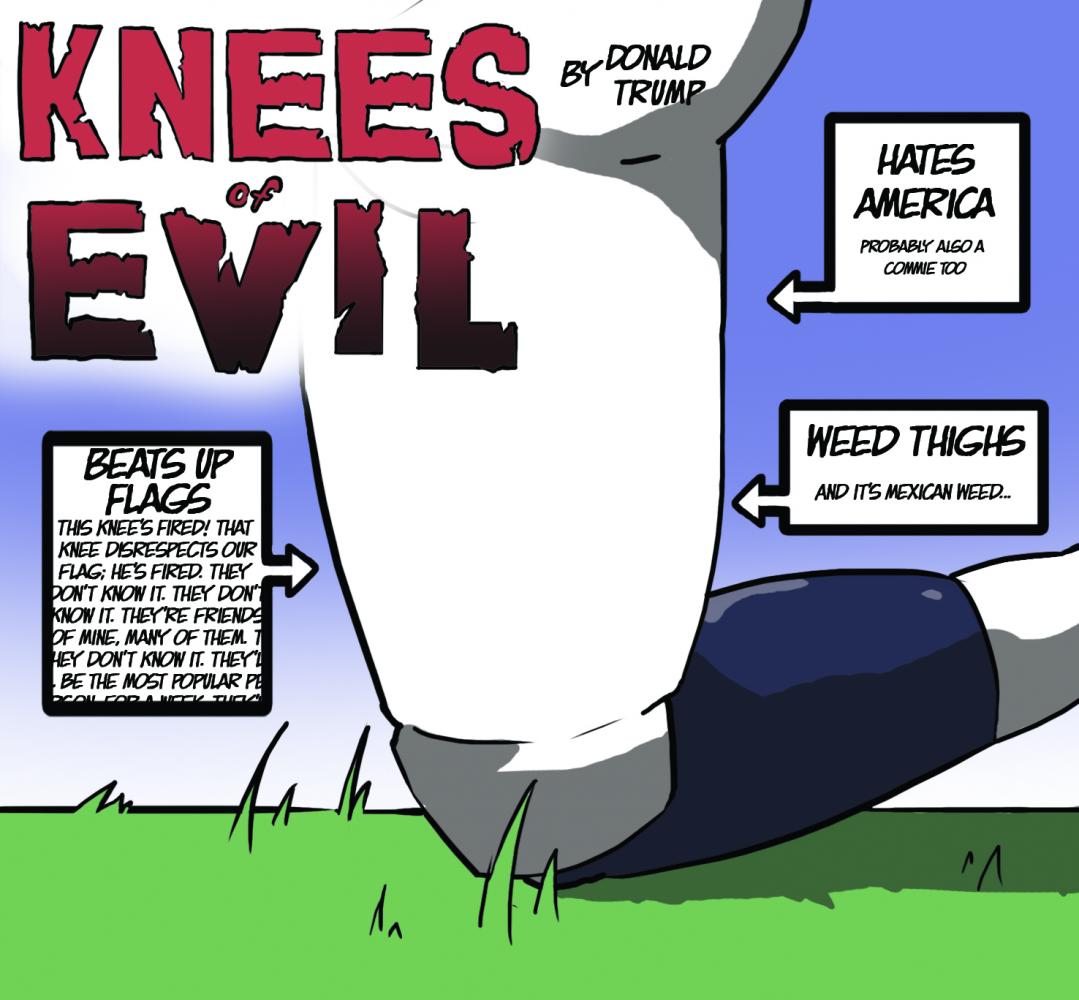 All eyes were on Colin Kaepernick as he took a knee during the national anthem at a 2016 preseason game. Kaepernick, then the San Francisco 49ers quarterback, chose to take a knee in order to highlight racial injustice and police brutality against African-Americans in the U.S.

Now, in the middle of the 2017 NFL season, the protest has spread. On Sept. 22, Donald Trump criticized the NFL for not reprimanding players that took a knee during the national anthem.

“The NFL has all sorts of rules and regulations,” Trump tweeted. “The only way out for them is to set a rule that you can’t kneel during our national anthem!”

Two days after originally condemning the NFL and its players, President Trump asked for fans of the NFL to take action against the protests.

Instead of weakening the protest, these statements have been garnering more attention from the general public and news stations. In wake of Trump’s comments, NFL players taking a knee during the anthem has been a leading story for several news outlets for days.

In response to Trump’s comments, NFL teams such as the Dallas Cowboys, New York Giants and the Washington Redskins have locked arms and knelt during the anthem. Other teams such as the Pittsburgh Steelers, Seattle Seahawks and Tennessee Titans have decided to not enter the stadium altogether while the national anthem plays. These gestures seen in recent games throughout the country are being viewed as a show of unity and solidarity between players and teams throughout the league.

Many people have been voicing their opinions on social media by using the hashtag “#TakeAKnee,” and even more have been discussing what it means to stand or kneel during the national anthem.

At Guilford College, The Office of Diversity and Inclusion and Brothers Doing Positive held a community discussion on Sept. 28 led by Interim Director for the Office of Student Leadership and Engagement Tim Johnson. This discussion was a space for members of the Guilford community to express their opinions on recent events including topics such as why individuals might choose to stand or kneel for the anthem and what taking a knee symbolizes.

“I think it was useful,” said sophomore Jarrod Russ. “I was expecting to hear people say they would take a knee, but most said they wouldn’t because of someone in their family being military or active duty, and I respect that.”

While some members do choose to stand, other members of the Guilford community appear to support the movement to kneel.

“Racial violence and brutality is very much a concern,” said senior Sommer Fanney.

While returning to Greensboro from a stop on her book tour, Associate Professor of English Mylène Dressler knelt in an Atlanta airport upon seeing an NFL game being played on TV to show her support for the protests taking place. By taking part in this simple act, Dressler explained that she was inviting others in the airport to kneel with her.

“You have to put your body on the line, not just your words,” said Dressler.

Due to the widespread amount of both criticism and support for the NFL “take a knee” protests in recent weeks, the main question for many people currently is “what next?” Johnson has hopes that things will change on a larger scale.

“I would love on a national level for people to recognize the hurt and pain of people of color,” said Johnson.

All the same, athletes and citizens all over the country are waiting to see where the movement leads.

“The greatest hope I have is that what they’re kneeling for will be attended to,” said Dressler.