Russia cracks down on Jehovah’s Witnesses 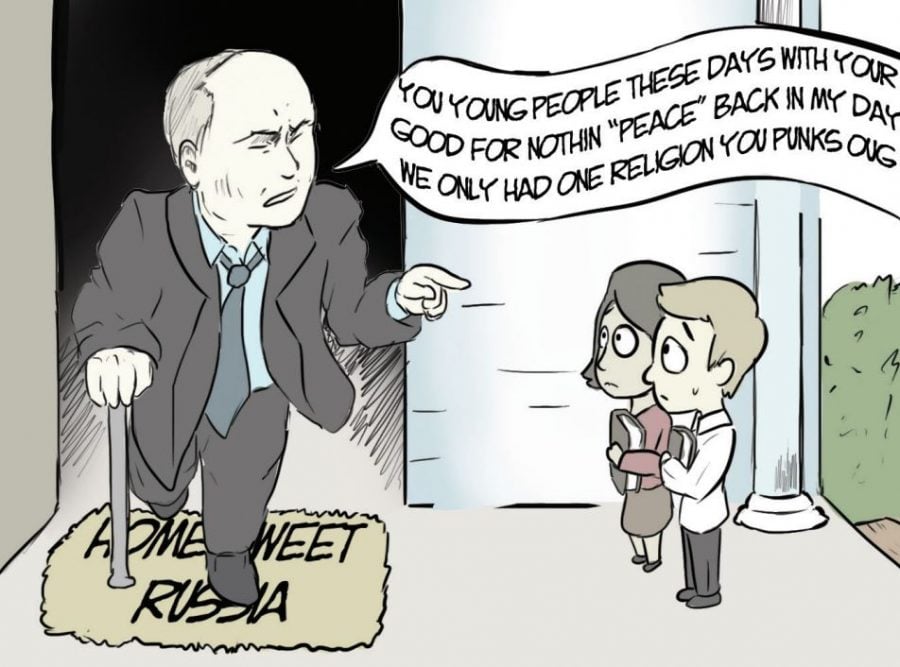 The Russian government has been cracking down on “extremism” lately.

Earlier this month, Russia banned a pro-LGBTQIA poster that used a picture of President Vladimir Putin because of its extremist content. In March, Kremlin-critic Alexei Navalny was jailed under the same anti-extremism law after organizing anti-Putin rallies.

The latest group to fall under the wrath of extremism charges is Russia’s 175,000 Jehovah’s Witnesses. The Russian government is making a move to outlaw the denomination due to its followers’ connection with “extremist activities” and distribution of “extremist texts.”

Founded in the United States in the late 19th century, Jehovah’s Witnesses are staunch conscientious objectors known for their door-to-door preaching. The religious group has had a minimal presence in Russia for at least 100 years.

“They banned Scientology,” said Professor of Political Science Ken Gilmore. “(Putin) has been cracking down on what they called ‘gay propaganda.’ It seems really consistent with Putin cracking down on any independent organization.”

As pacifists, Jehovah’s Witnesses refuse to serve in the military or attend state-sponsored rallies that glorify violence. Moreover, their adherence to political neutrality prevents them from voting.

“I think (Jehovah’s Witnesses) are a perceived threat,” Gilmore said. “170,000 people is a pretty sizable chunk of people who don’t vote or celebrate (at rallies). They look like they’re thumbing their nose at the Russian government.”

According to Gilmore, the effort to ban Jehovah’s Witnesses may be an appeal to the Russian Orthodox Church and its followers.

“It’s just one of those things where you’re playing to your base,” Gilmore said. “He probably has a lot of Orthodox Christians and old pensioners who harken back to some earlier time.”

Moreover, Gilmore compared the Russian government’s labeling of Jehovah’s Witnesses as extremists as being similar to actions carried out by U.S. President Donald Trump’s administration.

“Trump is doing the same thing with Planned Parenthood and NPR,” Gilmore said. “(Putin) has a lot of reactionaries in his country, just like we do in ours. Why would you ban Muslims when they make up such a small portion of the population and call them extremists?”

Others believe Jehovah’s Witnesses are being dubbed extremists because they are easy targets.

Because the religious group does not vote, politicians do not stand to lose any political clout by punishing them. Alexander Verkhovsky, director of the SOVA Center for Information and Analysis, a Moscow-based group that conducts research on extremism, nationalism, xenophobia and other topics, said Jehovah’s Witnesses are being made an example of.

“I cannot imagine that anyone really thinks they are a threat,” said Verkhovsky to The New York Times. “But they are seen as a good target. They are pacifists, so they cannot be radicalized, no matter what you do to them. They can be used to send a message.”

This is not the first time Jehovah’s Witnesses have been persecuted or placed under scrutiny in Russia. During the Soviet era, the KGB believed members of the denomination were spies for the U.S. and many were sent to labor camps or deported to Siberia. In 2009, several texts by Jehovah’s Witnesses were put on a list of “unacceptable literature.”

“In Stalin’s time, when I was still a child, the whole family was deported to Siberia only because we were Jehovah’s Witnesses,” said Vasily on the religious group’s website. “It’s a shame and sad that my children and grandchildren will be faced with something like that.”