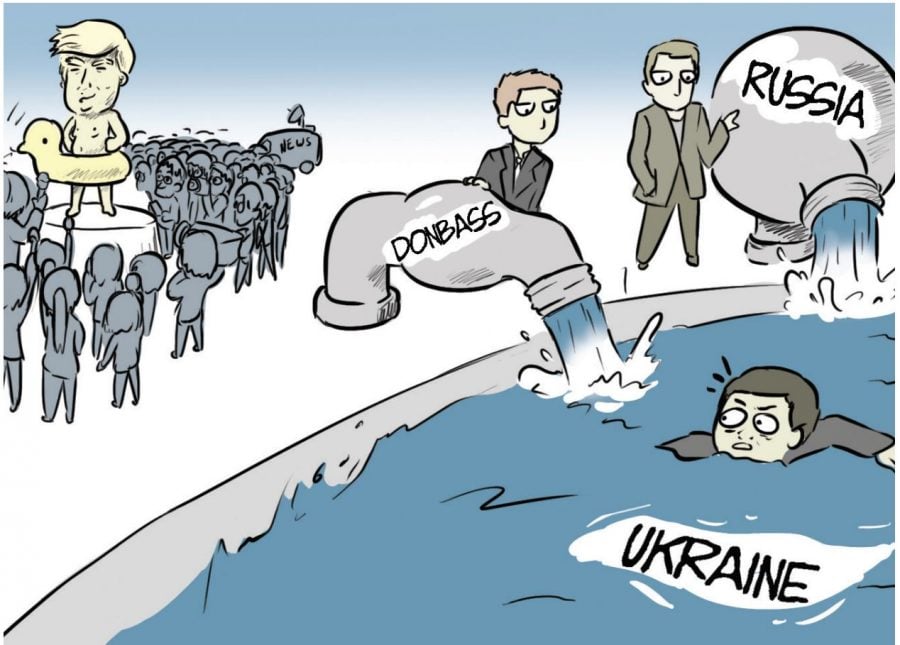 Over the span of a month in 2014, the Autonomous Republic of Crimea and the Black Sea city of Sevastopol fell out of Ukrainian hands and into Russian ones. Since April of that year, the eastern Donbass region of Ukraine has been a warzone.

In the oblasts of Donetsk and Luhansk, Russian government forces have armed and aided rebel groups who fight with the Ukrainian military for control. Though there have attempts to end hostilities — the latest cease-fire agreement was signed Feb. 20 but was broken 74 times within 24 hours according to the Kyiv Post — the war in Donbass has continued for nearly three years.

To Yulia Zakutnia, a digital marketer in Western Ukraine who also works for the Institute of Partnership and Sustainable Development, a non-governmental organization, the war is both distant and ever-present.

“Well, it’s a very complicated situation with the war here in Ukraine,” said Zakutnia in an email interview. “On the one hand, living here in Lviv, thousands of kilometers from the conflict zone, I almost do not feel the impact of war, except economic issues and (internally displaced people) problems. Even when I was in Melitopol, which is very close to conflict zone, I did not feel that people were shooting just less than a hundred kilometers away.

“On the other hand, it’s very hard not to mind the war, as almost every family has relatives or friends who are either taking their service, signing up the contract with the army or volunteering. Coming to Lviv, many people notice the military people around. The truth is that war continues, no matter if we want to recognize that or not. And people are tired of it, with all outcomes like instability, fears and economic issues.”

The U.N. Human Rights Monitoring Mission in Ukraine has logged nearly 10,000 deaths and 23,000 injuries in the war. Civilians represent approximately a fifth of those killed and a third of those injured. According to the Internal Displacement Monitoring Center, estimates indicate more than 1.7 million Ukrainians have been displaced by the conflict.

Yet, media coverage of the war is scant outside Ukraine.

“Media in Ukraine follow the situation, providing everyday reports on fires, losses and so on,” said Zakuntia. “However, these are not breaking news now, unless some peaks happen.

“What I hear from my friends abroad, they almost don’t receive any news on Ukraine.”

The international community has condemned and sanctioned Russia for its actions in the war.

“Well, Russian actions are recognized almost worldwide as illegal and invasive,” said Zakuntia. “The Russian side always breaks cease-fire agreements, (like the) Minsk agreement, and Ukrainian positions in the East are shot up almost all the time.”

Disentangling Russia from the region may be complicated, however. Senior Danewrys Tejeda, an economics major, studied Ukraine’s labor relationship with Russia.

“I looked at a lot of topics throughout Ukraine, primarily starting off with their gas line and their relations to Russia and politics,” said Tejeda. “Then, I focused on how pretty much dependent the Ukrainian economy is on their workforce and not just workers working inside the country, but (those) going outside the country and abroad to work and the impact of remittances.”

Many Ukrainian migrants, according to Tejeda’s research, find seasonal employment in Russia and send their paychecks back home. According to the National Bank of Ukraine, Ukrainians remitted an average of $2.3 billion a year from Russia between 2012 and 2014, 36 percent of all remittances to the country during the timeframe.

Ukrainians in Russia are a relatively cheap labor source.

“I feel like Russia is trying to take advantage of smaller, not as developed countries as Russia,” said Tejeda.

“During a few months, Maidan showed the really breathtaking power of people coming together,” said Zakuntia. “The main square in Kyiv was occupied by people from different regions for a few months. It was literally a city inside the city, with its own infrastructure and even social organization.

“I was studying in Kyiv at the moment and was at Maidan almost every day or night. The feeling of unity was something I cannot describe with words.”

Since the protests, Ukrainians have attempted to reform corrupt government practices, energy security and a host of other issues. Plenty of work remains.

“People face too many challenges, so they cannot remain romantic about the impact of Maidan,” said Zakuntia.

In light of Russia’s regional actions and the inability of the U.S. and European Union to help end the war, Ukrainians may seek to be more self-reliant looking ahead.

“In terms of international diplomacy, Ukraine has to strengthen its geopolitical impact, not only to be focused on internal issues, but become a player on a global level,” said Zakuntia.

Though the future is uncertain, some have hope.

“I would wish to be optimistic regarding that,” said Zakuntia. “People are tired of blood, of war. It should stop. Ukraine has very smart people with entrepreneurial spirit, great natural resources and many perspectives for development.”