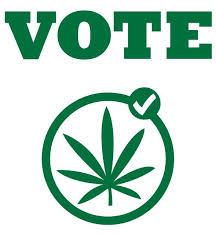 Planted within this election was a victory for a most unexpected candidate: weed.

In 1971, President Richard Nixon declared that drug abuse was America’s biggest enemy and launched the controversial offensive known as the War on Drugs. This attack was centered on restricting supply and hoped to worsen demand. The results, however, were not according to plan.

“What’s happened is the black market,” said senior Christian Honein, chair and founder of the Guilford College’s chapter of Students for Sensible Drug Policy. “Because whenever there’s demand, and you take away supply, that’s what happens.”

Since the war’s introduction, it has been met with sharp critiques.

“Honestly, making things illegal only grows the market for something,” said Alex Zacher, a Waynesville resident. “It’s a pretty common occurrence for things we have made illegal to become major controversies, when other countries give more leg room and see fewer or different problems.”

Twenty-six states have individually voted to legalize marijuana in some form, while seven states and the District of Columbia recently voted to legally allow recreational cannabis use. Under federal law, however, weed remains illegal.

Following the legalization of marijuana in Colorado, according to MintPress News in August, crime statistics showed the state became safer and generated over $60 million in revenue from marijuana taxation alone.

“A market that used to be controlled by gangs and cartels is now taxable,” said Honein. “I think kids getting textbooks is so worth people being able to smoke marijuana.”

Although North Carolina’s possession laws are more relaxed in comparison to its neighbors, involvement with cannabis is illegal and shows no sign of immediate change. The issue has been discussed in the state legislature, and North Carolinians have developed defined views on the topic that have yet to be officially polled.

“The benefits of legalizing weed are numerous,” said Patrick Elliott, a Franklin County resident. “It has great medicinal value, it’s essentially harmless and the taxation of it could be a great source of government revenue.”

In addition to revenue, legalization could hold an agricultural benefit for the state.

“The government spends so much money trying to control it and prevent it and sends people to jail for having it, taking up space for actual bad people,” said Margarette Dy, a Fayetteville resident. “Also more jobs for farmers and stuff. We need people to grow it so you need farmers.”

Controversy on the topic, however, remains rampant with strong opinions on both sides.

“It’s been illegal for so long, people have just assumed it’s bad,” said Bradley Hinson, a Mount Holly resident. “If it becomes legal then there will be a split group of people more so then now.”

“I wouldn’t say I support people always doing weed, but people should have the right to do what they please if it’s not harming other people,” said Andrew McBride, a junior at University of North Carolina at Greensboro. “If it’s government regulated, it’ll be higher quality and likely safer than buying it off the street.”

Although marijuana can amount to significant health issues because of its often unpredictable effects and addictive capability, many consider cannabis legalization to be a stamp of progress from previous approaches to the problem of drug abuse.

“People always abuse things like this like alcohol, and I would assume it would happen with weed as well,” said McBride. “A lot of people will do it now that it’s legal, but I don’t think (consumption) would increase that much.”

“There’s good evidence to show that abuse of painkillers and the incidence of drunk driving both reduced when the states where medical marijuana has been legalized, and I think we’re going to the same thing about recreational,” said Honein. “Marijuana is safer than alcohol, and I think that as it becomes more available to people, people will choose it over alcohol.”

Only time, trial of democracy and upcoming presidential appointments will predict future of marijuana legalization in the United States.