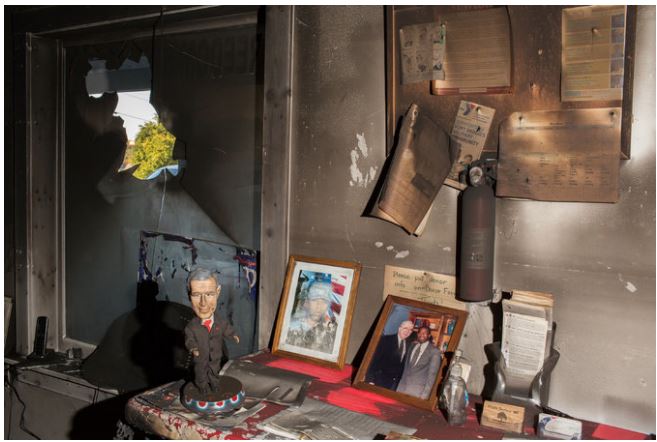 Officials are investigating the firebombing that affected various Republican headquarter offices in Hillsborough, NC on Oct. 16.

The Orange County Republican Party headquarters on Oct. 15 was firebombed, with the words “Nazi Republicans leave town or else” painted on the side of the building. There were no deaths or injuries.

This was deemed an act of domestic terrorism by Mike Pence, the vice presidential candidate for the Republican Party. It was seen as an attempt to silence the Grand Old Party.

Both Democrats and Republicans have condemned the act.

“The attack on the Orange County HQ @NCGOP office is horrific and unacceptable,” tweeted Hillary Clinton, the Democratic nominee for president, in response to the event. “Very grateful that everyone is safe.”

Donald Trump, the Republican presidential nominee, had a different initial approach to the act.

“Animals representing Hillary Clinton and Dems in North Carolina just firebombed our office in Orange County because we are winning @NCGOP,” Trump tweeted.

There is no evidence that the Clinton campaign had any part in the attack. It appears to be an isolated incident.

“ALL SAFE IN ORANGE COUNTY, NORTH CAROLINA,” he tweeted. “With you all the way, will never forget. Now we have to win. Proud of you all! @NCGOP.”

Luke Cullifer, a sophomore at the University of North Carolina at Chapel Hill and the public relations chair of College Republicans, thought not only did the firebombing vandalize a building, but it was also an attack on democracy.

“What happened that night was not just an act of vandalism, it was an attack on the cornerstone of this great nation, freedom of political expression,” Cullifer said to The Guilfordian.

This election has been a particularly tense and polarizing one. Sarah Thuesen, assistant professor of history, said that this is not the most violent election year in modern American politics, but that the rhetoric, particularly Donald Trump’s pattern of inflammatory comments, has “raised alarm” on more than one occasion.

“Election-associated violence is not without precedent in modern American politics,” Thuesen said. “That said, I do think this election will be remembered as one of the most polarizing in American history.”

However, there was some unity brought about by the attack. David Weinberger, a senior researcher at Harvard University’s Berkman Klein Center for Internet and Society, started a campaign on GoFundMe, “Dems Raise Money to Reopen NC GOP office,” which raised approximately $13,000. The campaign, he said, was a way to celebrate and protect democracy.

“It seemed like a good occasion to remember, in public, that beneath all of our differences — and as a Democrat my differences with the North Carolina GOP go especially deep — we all cherish and depend on our democratic processes,” Weinberger said in an email interview with The Guilfordian.

Leah Abrams, a first-year student at Duke University and the communications director for Duke Democrats, found the bipartisan collaboration inspiring.

“We hope that such collaborations between parties are more indicative of the future of American politics than any act of violence,” Abrams said to The Guilfordian.

There have been some criticisms about the donations from Democrats, with suggestions that they donate to LGBTQA groups or others that align with their values instead.

“I am a black North Carolinian native deeply invested in the state’s welfare as my family is still there,” tweeted Tressie McMillan Cottom, an assistant professor of sociology at Virginia Commonwealth University and a faculty associate with the Berkman Klein Center, according to Vice News. “I won’t be funding the NC GOP.”

With fewer than three weeks until the election, the North Carolina GOP plans to continue their campaigns, despite the firebombing.

“We will not be intimidated,” said Dallas Woodhouse, the executive director of the North Carolina Republican Party, in a New York Times video. “We will not be scared. We are not going anywhere.”