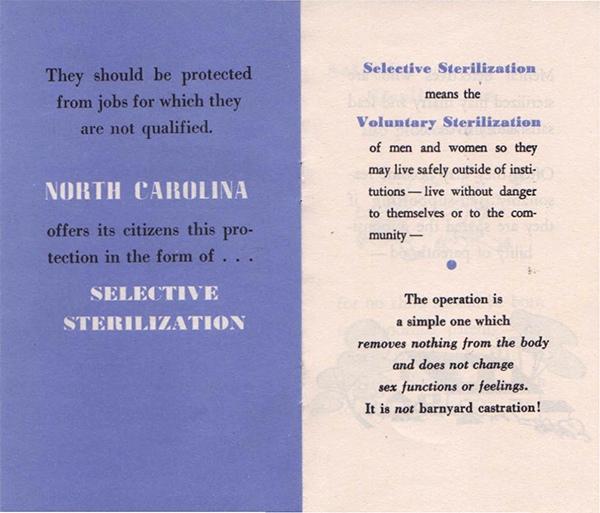 Elaine Riddick was raped at age 13.  After giving birth to her son at age 14, in 1968, she was sterilized without her consent.

She was only one of 7,600 people forcibly sterilized by the Eugenics Board of North Carolina who the state deemed unfit to have children.

“North Carolina carried out relatively few eugenic sterilizations before WWII, but after the war, it grew far larger and targeted mainly black women,” said Daniel Kevles, Stanley Woodward Professor of History at Yale University and author of “In the Name of Eugenics: Genetics and the Uses of Human Heredity,” in an email interview with The Guilfordian.

Although often associated with the Nazi regime in Germany, eugenics was also popular in the United States.

“The eugenics movement was a major movement in this country and in other countries in the early to mid 20th century,” said Marcy Darnovsky, executive director of the Center for Genetics and Society, to The Guilfordian. “It was people across the political spectrum who thought this was a good idea. It wasn’t just right wingers or racists.”

Unlike other states, though, North Carolina is offering compensation by paying those victims that come forward a total of $10 million.

“(Each person sterilized under old eugenics laws) receives a check for $20,000, and they are likely to receive another check for a little more than that for a total of close to $50,000 for each person,” said Chris Mears, a spokesman for the North Carolina Department of Administration, in a phone interview with The Guilfordian.

These payments do not come without a few drawbacks.

“The money will go to victims only, and not the families of victims who might be deceased,” said Tommy Tomlinson, a freelance writer and former Charlotte Observer columnist, in an email interview with The Guilfordian.

Some victims are also ineligible to qualify for monetary compensation.

Many of the victims eligible for this have died before being compensated.

“The state has been very slow in making these payments, and they have delayed it for many years,” said Paul Lombardo, a Bobby Lee Cook Professor of Law at Georgia State University, in a phone interview with The Guilfordian. “The apology North Carolina made was more than 10 years ago. Many people have died waiting for that compensation.”

“We moved up the compensation timelines because many of the victims were dying,” said Mears. “In order to compensate folks before they passed away, we wanted to pay them sooner.”

Despite the flaws in compensating its victims, North Carolina has done far more than other states.

“North Carolina is the first state to make any payments to people who have been sterilized under old eugenics laws,” said Lombardo. “It’s one of seven states that apologized, and there are 25 other states that haven’t done anything.”

To many, compensation of any kind is welcomed.

“I am so grateful that the state of North Carolina recognized that what they did was wrong,” said Executive Director & Board Chair of the Rebecca Project for Justice Elaine Riddick to The Guilfordian.

“I’m hoping that other states will follow the trend that North Carolina has set. It’s not about the money. It’s about bringing closure.”