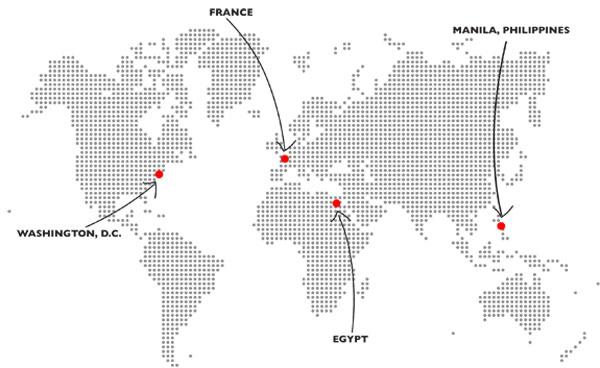 Studies show the sperm count in France has decreased by 32 percent over the past 17 years. Scientists theorize that this decline may lead to a dangerously low sperm count in French males and result in widespread infertility. Because the decrease has already affected an entire country, there is growing concern that low sperm counts may become a global issue. Potential environmental causes are under investigation.

On Wednesday, 274 Philippines residents were reported dead after Typhoon Bopha swept Manila.  An additional 339 people were injured in the storm and 279 remain missing, but tallies are expected to increase after more villages have been surveyed. 100 mile-per-hour winds and torrential down- pours destroyed eastern coastal agricultural lands, costing farmers tens of thousands of coconut trees and acres of banana plantations.

Egypt
More than 100,000 protesters rioted around the palace in Egypt’s Tahrir Square, rebelling against President Mohamed Morsi’s declaration of a new, Islam-based constitution. Security forces were unable to control the masses with tear gas or force, causing Morsi to flee the palace seeking safety. He returned on Wednesday.

President Obama and Speaker of the House John Boehner continue to hash out stipulations of the new financial plan. Obama demands low tax rates for Americans earning under $250,000 and an increased rate for the wealthiest two percent. Should Republicans block this proposal, 45 percent of Americans say they will blame Boehner’s Congress for a tax hike on the middle class. Boehner conceded on Wednesday to increased taxes on the wealthy, but a final agreement has yet to be reached.