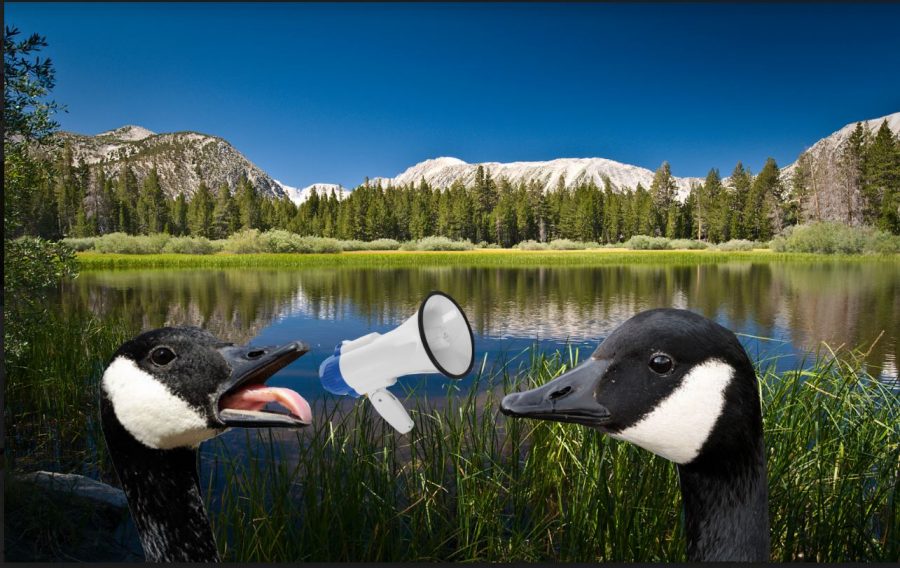 Goose Springstein violently interviews Kurt Vonnegoose about the humans that walk around Guilford campus. The student/goose divide has gotten worse since the College was built back in 1837. // Photo by Goose Goosey Jr.

Last week, I was meandering across the quad in front of Hege-Cox when a student honked at me. He then raised his arms, mimicking the way me and my friends raise our wings when we feel threatened. He then laughed and walked away, leaving me confused and angry.

This isn’t a rare occurrence.

As one of the few members of the gaggle that can write in English (and Portugeese), I am the mouthpiece, or beakpiece if you will, for my brethren, the resident Canadian Geese.

We are a proud and noble species. We are the Branta canadensis maxima, the underdog story of endangered animals. From being considered extinct to now thriving, we have changed and adapted to this new, urban/suburban world. Some of us have opted out of migrating, and we are called resident geese.

I’m sure you’ve seen us, at the Lake, in front of Hege-Cox, the Binford parking lot. It’s not like we are keeping quiet, as we mill about the campus, shuffling around the grass, honking at each other. We have a presence here, and we want to make our honks and hisses heard.

Yes, we are the geese that you complain about. The ones that you bluster and charge at and honk at with your mocking metal machines. But now we are honking back, with purpose.

I asked two ducks and a goose and a student-athlete, for the sake of diversity, about how they feel on campus, specifically in regards to their interactions with students. Though, the two ducks’ quotes really didn’t fit the bill of this article.

“Hisssssssssss… honk,” said Goose Springsteen when asked how he feels about students on campus. He then raised his head up and down, continuing to hiss his displeasure.

Personally, I don’t think I could have put it any better.

We actually found a surprising ally in the student-athlete.

“No, I totally understand feeling ostracized from the students,” said Chad Miller, junior and lacrosse player for the Quakers. “There really is a divide between geese and students, very similar to what I have experienced. I think people need to reconsider their oppressive viewpoints.”

Even the language associated with us is inherently negative, such as waterfowl. Our feces might contain bacteria such as listeria and e-coli and parasites such as giardia and cryptosporidiosis, but we are not foul creatures, especially in comparison to you humans.

We will continue to have our species’ equivalent of sit-ins in the most inconvenient places.

We are residents, just like you are. We have the same right as you do to wander the quad, making people late for class and freely excreting waste.