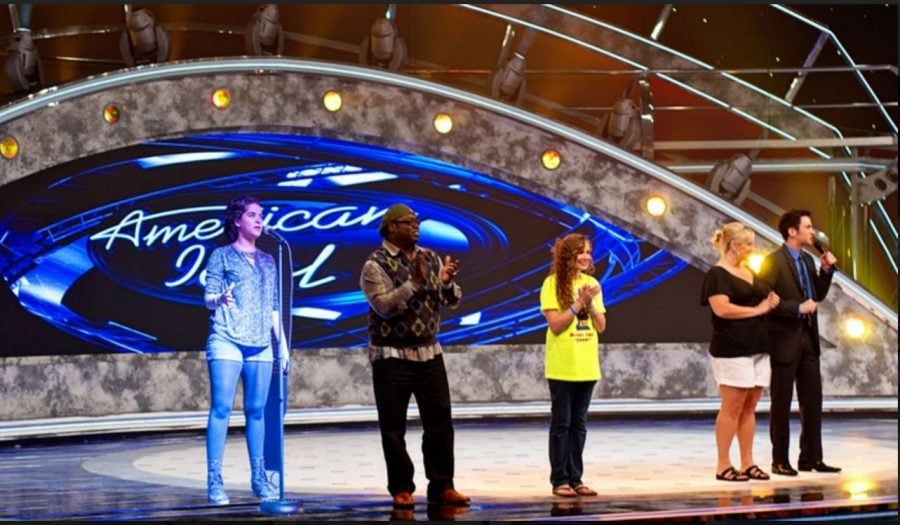 Addy Allred ’16 performs in the newest American Idol season this past Monday, March 28, 2017, in Los Angeles, California. Allred’s mixtape is expected to drop the summer of 2020.

Simon Fuller, popularly known for managing the Spice Girls, is also the mastermind behind the “Idol” franchise that spawned “Pop Idol” and “American Idol”

In an exclusive interview with The Guilfordian, Fuller discusses his “College Edition of American Idol” and the concept behind it.

Q: Thank you, Simon. Can I call you that?

Q: Alright. As I was saying, thank you for granting me this interview.

Fuller: Oh no, it’s an honor to have a Guilfordian converse with me, heard great things about the paper.

Q: Okay to jump right in. You’ve chosen to have Guilford College host a special on “American Idol.” How did you decide where you were going to have it?

Fuller: Well, the company has been looking for ways to expand the franchise and to reach a bigger audience. We had everyone in the company brainstorm ideas, and we were specifically looking for mediums that the franchise hasn’t tried yet and came to a decision to go the college route. We noted specific characteristics that we wanted in the higher institution we were going to use, and Guilford College was one of the top choices. We sent out people to different campuses, did some background research and here we are today.

Fuller: It was, but it was fun. We were excited. I assume because it was different from the previous “American Idol” setup.

Q: Did you make the decision on what college to go with?

Fuller: It was a group decision, but it is safe to say I influenced the final decision.

Q: Since you are doing something different with the franchise, would you have the same routine as “American Idol” or, are you adapting a different style completely?

Fuller: We have some open discussions within the company about what directions are appropriate for a college setup. We don’t want to create chaos; we want to have a show that won’t be completely distracting for the students. We are also considering options that maintain a good flow of traffic on campus. Nothing rowdy, but we are working on it and rest assured that we have the students as the focus of the show.

Q: Are you able to share with us some of the judges, that will be on the show?

Fuller: Definitely. We will be having Willow Smith and Nigel Lythgoe. Those two are the only confirmed judges but we are working on having a great blend of celebrities for the show.

Q: Nice. Why Willow and Nigel? Were there any particular reasons in choosing them?

Fuller: Absolutely. Willow Smith is young and vibrant. She is a great artist with an amazing perspective. I think she falls in an age range where she can give great advice, being a young artist herself. Nigel Lythgoe is not only someone I’ve worked with repeatedly, but he is a good friend of mine, and we always love having him on the show. It wouldn’t be “American Idol” if he wasn’t one of the judges. He has a unique way of connecting with different age groups.

Q: Why do you want contestants to compose and sing a new national anthem, and how did that idea come about?

Fuller: We want to test the creativity of the students. I mean, we all have creative minds, and students can easily tap into that part of their brains. I think it would be great to listen to the various ideas that are not only unique to the College/Special Edition but also “freshly baked.” It would be an honor for the next national anthem to be a product of “American Idol.” It could even be used in a movie, you never know.

Q: Are you saying it is a college-student-only affair?

Fuller: Yes, I am. It is open to college students in the USA and exclusive to them.

Q: Thank you for having this interview with us, is there anything else you’d like to include?

Fuller: Mmh, look forward to the “College Edition of American Idol.” We’ll be having a meeting with Willow and some of the other judges soon, so we might get the chance of conversing once more.