Putting the student in student-athlete 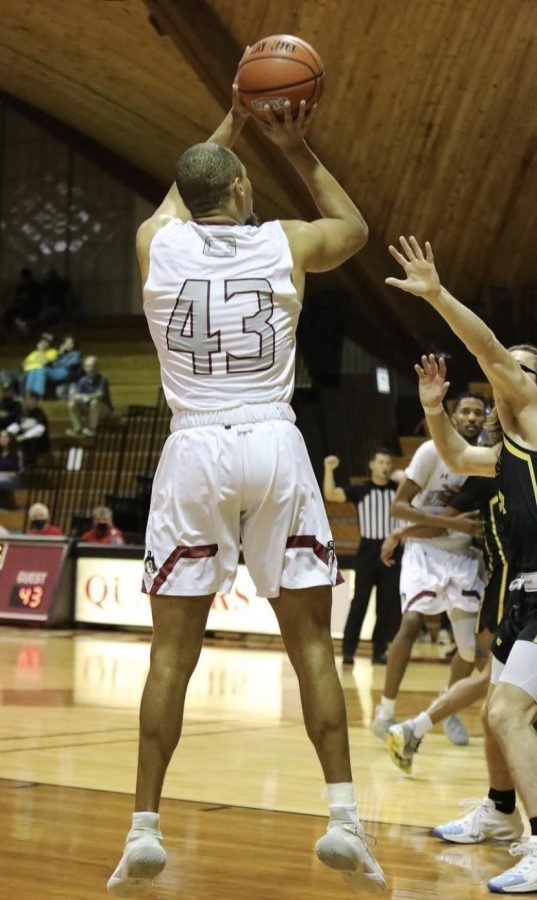 Jason Foulks drains a short jumper in a game against Randolph College on December 1, 2021, at Guilford College.

When brains meet the court, it is a dangerous combination. Jason Foulks is a 6-foot 5-inch senior forward who has been a part of the program for four years and is a devoted student who also focuses on being the best he can be on the court.

Foulks has been an athlete from a young age. He grew up in Ramseur, North Carolina, and attended Chatham Charter High School, where he played baseball, basketball, and golf. During his senior year, he decided to focus solely on basketball. With the desire to be the best at everything he does, he excelled in basketball and always had aspirations of playing in college.

Foulks began to talk to his high school basketball coach, Ronnie Smith, about options for college, and committed to Guilford during his senior basketball season. He chose Guilford so that he could fulfill his dream of playing college basketball while obtaining the education he desired.

“I wanted the right fit and when I came on my first visit, I knew this was it,” Foulks said. “A small community allows for everyone to get to know everyone, in a sense.”

Although Foulks has always had a passion for athletics, he takes his academic career just as seriously. Early in high school, he was engaged in science classes and discovered an interest in the medical field. In the fall 2018 semester, his first at Guilford, he declared a double major in biology and health sciences in order to pursue a career as a physician’s assistant.

The rigorous schedule of intense classes, basketball games and practice becomes too much for some, but not for this student-athlete. Foulks has been on the dean’s list multiple times and also has received academic all-conference honors several times. He has raised the bar for what it means to be a student-athlete while excelling in both fields. He embraces challenges and finds ways to succeed rather than making excuses.

“Creating a structured plan has been my main tool, while also taking pride in both basketball and academics,” said Foulks.

Drew Shaw, an assistant coach for Guilford’s men’s basketball team, has gotten to know Jason Foulks as a player, teammate and friend.

“In all three of these aspects, Jason is tremendous,” Shaw said. “He prioritizes what he needs to get accomplished for the day and runs on very little sleep at times, but that has allowed him to be successful both in school and on the court.”

Shaw spoke very highly of Foulks as a friend and explained that they met through basketball at Guilford. “Jason took me under his wing during my first year at Guilford in 2019,” he said. Shaw played two years at Guilford as a forward and guard.  Now, as an assistant to the coaching staff, he helps players develop ball handling skills and makes sure schemes are run correctly.

In Foulks’ free time, he enjoys working out, spending time with friends and family and playing golf when his schedule allows it. His mother, Katina Foulks, describes him as  “a highly motivated person, which leads to very little down time, but he enjoys getting the most out of each day.”

Foulks epitomizes living life to the fullest, giving each and every day everything he’s got. He is a very driven person in all aspects of life.

Foulks’  longtime friend James Mishoe and Shaw both say he enjoys the little things that come with each day while maintaining a great attitude. “Foulks’ personality is infectious, which is a great trait for someone belonging to a sports team and pursuing a career in the medical field,”  Mishoe said.