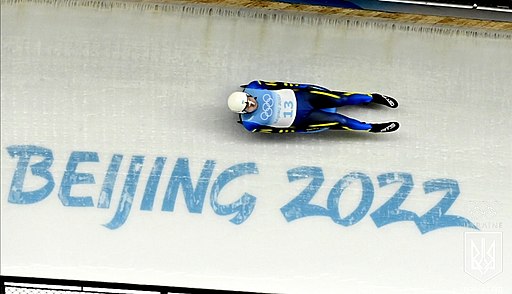 Luge athlete Andriy Mandziy of Ukraine competes at the 2022 Winter Olympics on Feb. 6, 2022.

After four years, the Winter Olympics returned this month, and the 2022 Beijing Olympic Games certainly have been memorable ones. This year’s Games not only had to face the lasting effects of the COVID-19 pandemic but also had to face their fair share of controversies.

The Beijing Games started on Feb. 4, but China was preparing for them long before this month began. The Chinese government put in place several precautions and additional policies in an attempt to enforce its zero percent Covid policy. According to CNN, “to those new to China’s ‘zero-Covid’ approach, the meticulous control is both confusingly convoluted and alarmingly restrictive. Often, Covid prevention makes simple tasks unnecessarily difficult.”

Some Olympics watchers believe the controversy takes away from the Games and athletes who are competing, and may affect how the athletes perform.

“As a competitor, I think the hardest thing would be the lack of spectators, especially not having family there,” said coach Marty Owens, director of women’s triathlon, cross country and track and field here at Guilford. “I have seen a lot of the reports on news channels regarding the measures to keep the Olympic Village and venues separate from the rest of the country.”  While those measures may seem extreme, “given the pandemic you would have to expect that,” Owens added.

Since COVID-19 is still a wide-reaching issue affecting everyone in the world, China’s very cautious approach makes sense with athletes traveling there from across the globe. However, even with all of those precautions, coronavirus cases emerged within the games.  On Feb. 4, after the opening of the Games, CNN reported that  “more than 300 coronavirus cases — about a third of them linked to athletes and team officials” already had been detected among Olympics participants who had recently arrived in Beijing.

Despite these controversies and some American athletes being unable to compete because of the virus, at the close of the Olympics, according to olympics.com, U.S. Olympians had won eight gold medals, 10 silver medals and seven bronze medals for a total of 25 at the close of the Games on Feb. 20. According to olympics.com, a website maintained under the umbrella of the International Olympic Committee, that puts the U.S. at fifth place in the total medal count, with Norway in the top spot with 37 medals.

The first USA medal was won by snowboarder Julia Marino on Feb. 5. Marino won a silver medal in women’s snowboarding slopestyle with an impressive two runs, the first with a time of 30.61 and a second run of 87.68, which won her the medal. On Feb. 6, skier Jaelin Kauf won the silver medal in the women’s moguls event.

Another U.S. silver medal on Feb. 7 was just four hundredths of a second away from gold, according to the New York Times. Won by Ryan Cochran-Siegle in Alpine skiing’s men’s super-G, the silver medal was the first U.S. medal in Alpine Skiing at the Beijing Games.

Team USA’s first bronze medal was won by Jessie Diggins in the cross-country skiing event. On Feb. 9, Colby Stevenson won the silver medal in freestyle skiing. In the women’s snowboardcross on Feb. 9, the U.S. scored its first gold medal of the games with a win by Lindsey Jacobellis.

On the same day, Chloe Kim won the second gold medal of the Games for the U.S in snowboarding’s women’s halfpipe, making her the first multi-title winner of the women’s halfpipe Olympic division in history. Lastly on Feb. 9, the U.S got its third gold medal when Nathan Chen prevailed to meet his longtime goal of becoming an Olympic champion in  men’s single figure skating.

In freestyle skiing’s mixed team aerials, a new event for the Winter Olympics, Ashley Caldwell, Chris Lillis, and Justin Schoenefeld won gold on Feb. 10. In the U.S. mixed team snowboardcross finals, Lindsey Jacobellis and Nick Baumgartner also won a gold medal. Speedskater Erin Jackson won a gold medal and made history on Feb. 13, as the first black woman to medal in her sport  in the speedskating women’s 500-meters event.

On Feb. 17, the U.S. women’s hockey team lost to Canada’s team to earn a silver medal in the women’s hockey division. Brittany Bowe won a bronze medal in speedskating’s women’s 1000 meters on that date.  Skier Jessie Diggins, Sylvia Hoffman and Elana Meyers Taylor in two-woman bobsled, and freestyle skier Alex Ferreira all medaled for Team USA in the final two days of the Games, Feb. 19 and 20.

The United States performed quite well in this year’s Olympics, despite the controversy and difficulties.  And given the usual rise in interest in American athletes and lesser-known winter sports that typically surrounds the Winter Olympics, Guilford coach Owens expressed surprise at not seeing “much mention of the Olympics or inclusion of an Olympic theme in some college events.”

However, a low profile for the Beijing Olympics at Guilford does match up with low TV ratings for the Games. According to NPR, NBC’s coverage of the Winter Olympics had the smallest TV audience in the network’s history of broadcasting the Olympic Games, even while the 2022 Beijing Games were the most streamed Winter Olympics ever.

As quoted by the Los Angeles Times, Sarah Hirshland, chief executive of the U.S. Olympic and Paralympic Committee, chose to focus on the positive when reflecting on the ups and downs of the Games.  “‘If the outcomes were predictable,’ she said, “‘this wouldn’t be fun for any of us.’”