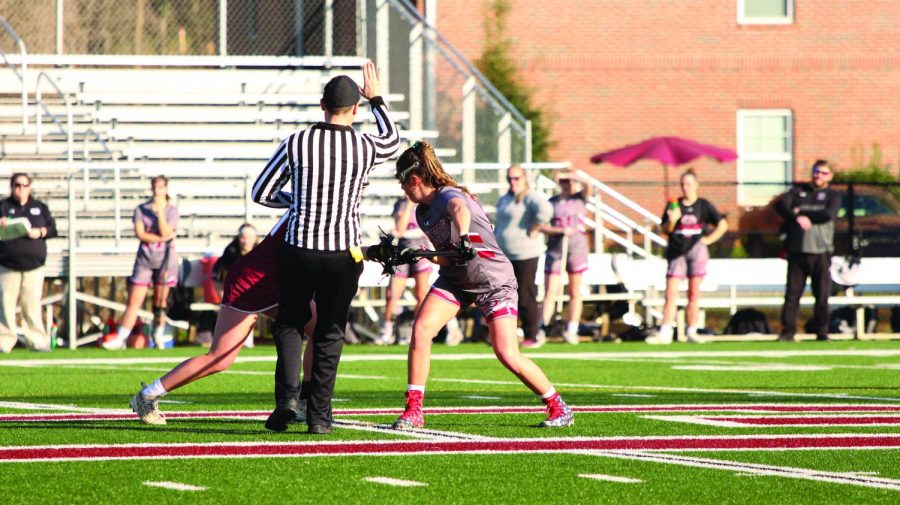 Senior Madison Iandoli waits for the whistle for the draw.

The 2020 women’s lacrosse team is looking to build upon the strong foundation laid in 2019. 2020 marks coach Charlotte Dixon’s third season.

“I think that we are coming into this season more fit and at a better baseline for stickwork and things like that. We are coming in at a better place than we have in years past,” Coach Dixon remarked. “We made strides last year, but with this incoming class (of first-years) we filled a whole lot of gaps we had in our game, one of them being goal scoring,” Dixon said. “We have some real dominant attackers and dodgers in this first-year class that will help fill that gap we had in the past couple of years.”

In 2019, Guilford College women’s lacrosse team finished with a 7-9 record. In 2020, the Quakers bring in six first-years, return 12 players, and have one transfer.

“As a first-year, I was kind of nervous coming in and figuring out the dynamic of a new team,” said first-year Alli Earwood. “The upperclassmen have been so helpful and supportive. They provide such great leadership on and off the field and have been such a great asset to have.”

“We have some good leadership by example in the senior class,” Dixon explained. “They have been contributing the whole time they’ve been here.” One such senior is Madison Iandoli.

Iandoli, a senior midfielder, was named a Third Team All-ODAC pick for the second straight season. She led the Quakers with 58 points on a club-high 39 goals and 19 assists. Her 138 career points in 47 games stand 13th all-time at Guilford.

Junior Audrey Helfenbein was second on the team with 51 points. The junior tallied 24 goals and dished a team-best 27 assists.

Her 27 assists in a season rank fourth in school history for a number recorded in a season. Helfenbein’s best game in 2019 was against Sweet Briar College when she scored a school-record 13 points on five goals and eight assists.

Senior captain Abigail Horchar contributed 30 goals and had nine assists for Guilford. Her 30 goals were third on the team and her 39 points were fourth.

Junior captain Nia Gill was second on the club with 19 caused turnovers and collected 30 ground balls. She goes into her third season ranking seventh in school history with 122 career draw controls.

McCaine Brandt rounded out the Quakers’ top five in scoring. A sophomore, she potted 11 goals and had 12 helpers for 23 points.

Goalkeeper Kersten Daneau was fifth in the ODAC in both saves (109) and goals-against average (12.06). The sophomore netminder played all 960 minutes between the pipes for the Quakers.

“This season, the biggest challenge we probably have is going to be our conference games,” Earwood said. “We are a very strong team, but there are some amazing teams in the ODAC. We just need to continue to work hard and play lacrosse the way we know how and we will be able to get the results that we want.”