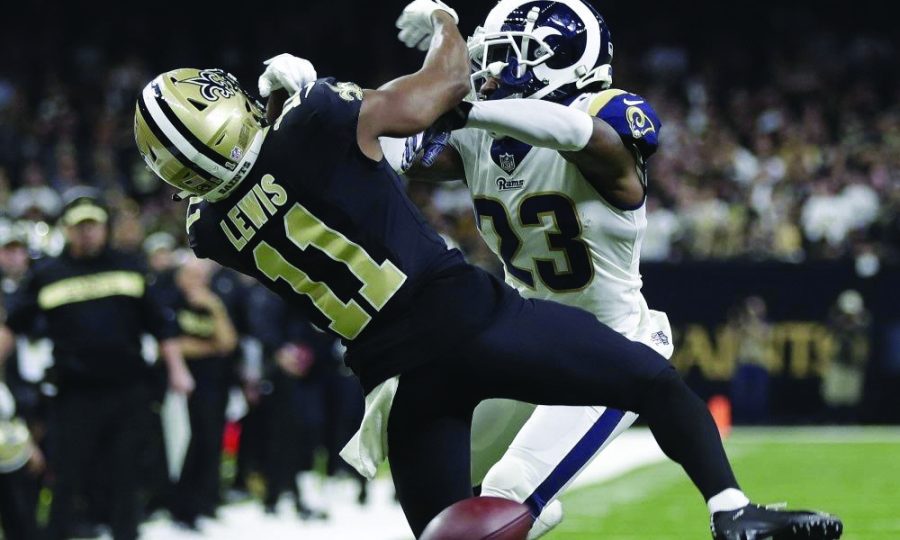 Nickell Robey-Coleman collides with Tommylee Lewis. This collision was the start of an offseason discussion which lead to the review being put in place.

“The idea of the pass interference review rule is great, and I think if used correctly can be very beneficial,”said sophomore Joey Hegeman. “But so far this NFL season the officials have not used this new system to its full potential.”

The replay is only granted if there is clear evidence of a pass interference penalty on the given play. The biggest reason the pass interference review rule was implemented is to help avoid situations like the Saints losing in the NFC championship last season when the officials failed to call pass interference.

Based on the 2019 season, the new pass interference review rule has caused more confusion among coaches, fans and even officials than clarity.

“I am not a fan of the new rule that pass interference is reviewable,” said Senior Brett Shapcott. “The biggest problem with it thus far this season has been the inconsistency of the rule. I have seen plays where it was obvious pass interference and it did not get overturned.”

For example, earlier in the NFL season the Baltimore Ravens were playing the Arizona Cardinals and Lamar Jackson threw a pass to Marquise Brown. Then the corner for the Cardinals tackled and swatted the ball away before the ball had arrived.

The crowd, players and coaches shouted for a penalty, but it was not granted due to a lack of evidence. The biggest concern people around the NFL have is if this system will ever change and start to benefit the league. So far this season, it has been a real struggle as coaches and players have expressed their concerns on and off the field.

“The pass interference penalty has always been inconsistent, and I think the issue is that referees interpret it differently and it is something that is hard to make perfect,” Shapchott said.

“The game moves so fast and referees have to think on the fly. It is something that will probably never be perfect, but I think adding the ability to challenge pass interference further complicates the issue,” he said.

Proponents of the review defend it, citing how many things in the game have improved because of previous challenge rules.

“I don’t see any negative side of the pass interference review rule being used,” senior Ty Hicks said. “I really think it can be helpful so that football is played clean and each team is treated the same with penalties. The main problem I have seen when watching NFL games is that when officials do decide to review a play, they (rarely) agree to overturn the call on the field, which is annoying because that penalty could be the factor that decides who wins the game.”