Many black quarterbacks seize success in 2019 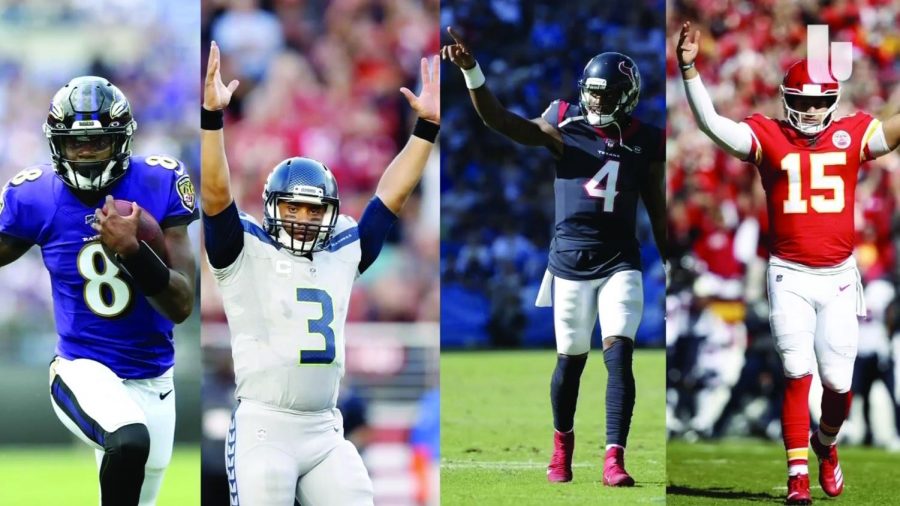 As the NFL enters its 13th week, we continue to see successful endeavors from teams like the Baltimore Ravens and Seattle Seahawks, both of which have African American quarterbacks.

Lamar Jackson, the starting QB for the Ravens, is undoubtedly a top contender for MVP, solidifying himself as one of the most versatile QBs in the game. The same goes for Russell Wilson, who throughout his years in the league has not only taken his team to the Super Bowl, but has made it to the Pro Bowl six times, showcasing his individual talent.

False stereotypes have plagued the NFL since its founding, continuing even today. People assume black NFL players don’t have what it takes to lead their team to success, which can easily be dismissed by Lamar Jackson’s or 2019 MVP Patrick Mahomes’ performances. In the Baltimore vs. Miami game, Jackson racked up 324 passing yards as well as five passing touchdowns, according to ESPN.

“It’s great to see a diversification of the QB role, but it’s sad that it took this long for black quarterbacks to get the recognition they deserve,” said first-year Guilford student Julian Maycock.

“Seeing how Lamar Jackson has performed so well both in the pocket and on the run, I don’t see anyone more fit than him to be this year’s MVP,” Maycock said.

“It’s undeniable this year has been dominated by black quarterbacks, seeing as Patrick Mahomes was last season’s MVP and Lamar Jackson’s the top candidate for this season. Other players like Russell Wilson and Dak Prescott are right at the top too, showing no signs of slowing down,” said Alford.

This momentum started with NFL legends like Michael Vick and Warren Moon, who helped pave the way for the black quarterbacks of today.

According to Complex, Moon amassed 49,325 passing yards and 313 touchdowns over his career, completely dismissing any stereotypes or false notions people had about him and Black quarterbacks in general. Vick made history with 6,109 career rushing yards, as well as 22,464 passing yards. He transformed the role of QB from pure passing to a dynamic pass-run combination that gave more freedom to what the QB could do.

The success of black quarterbacks has come from these two styles, with Mahomes being an excellent passer, Wilson a great passer with the ability to run if necessary, and Jackson who has mastered both. These three alone have shown that not only are black quarterbacks great players, but they are also great leaders who can work with their teams to build positive records and overall harmony.

2019 is undoubtedly the year of the Black quarterback. Whether it’s Jackson’s unreal talent, or Mahomes’ superhuman arm, the success is everywhere.If you still have any uncertainties and need proof, just look at last year’s MVP, this year’s first draft pick or simply check out a Ravens game and watch the magic happen.