Men’s basketball focuses on ‘locking in’ 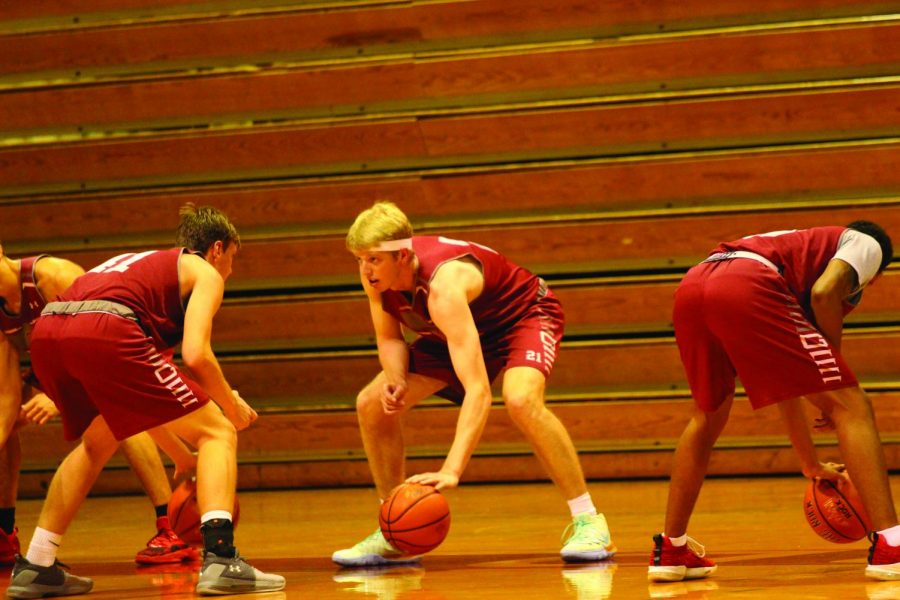 The 2019-20 men’s basketball team has high expectations to live up to. Last year, the Quakers captured an ODAC title before making a run to the Elite Eight of the NCAA Division III National Championship.

“We were really excited that our team played so well together at the end of the year,” Coach Tom Palombo remarked. “I think that’s everybody’s goal. We weren’t very good in the beginning, so it was nice to see the progress we made over the season.”

The Quakers graduated two important players from the 2018-19 roster. Marcus Curry and Carson Long combined for 27.8 points and 13.2 rebounds per game.

“Those guys were really steady influences, great guys and great leaders,” Palombo said. “I think losing all of those guys was a big blow for us. I think the challenge for us is to, number one, find what our identity is as a team. We’re going to put the guys that we have in situations where they can be successful.”

The duo combined for five All-ODAC team selections over their careers. Curry returns to the team this year with a role as an assistant coach, joining 17th-year Head Coach Tom Palombo and Assistant Head Coach Ronnie Thomas. Palumbo is returning 14 players, bringing in one transfer and adding 10 first-year players for the upcoming season.

“So far this season we have been working in the trenches, trying to hammer down our fundamentals and get the offense running smoothly at a base level before we start adding in complexities and getting ready for specific opponents,” said sophomore Liam Ward.

Among the returners are senior forward Kyler Gregory and redshirt junior Jaylen Gore.

“Jalen’s a big part of that, especially being the point guard and running the show out there,” Palombo said. “We’re all really pleased with how he’s developed and come along since his freshman year.”

Gore returned and provided a spark last year after missing much of the 2017-18 season due to an injury. He averaged four rebounds and 4.2 assists (which lead the team), adding 10 points a game to his totals.

”Hard work, coming off two surgeries last year. I was determined to get back playing to a high level, ” Gore remarked. ”Having a positive mindset even when situations are bad really has helped me focus on doing the right things and doing whatever I can to help myself.”

Attacking every workout, practice, film session, etc., like an actual game has given me success because preparing myself way before the game makes it a lot easier once I am in the moment of the game.”

Gregory, an All-ODAC forward, was a force for the team last season. Gregory scored 13.5 points per game, pulling down a team-leading eight rebounds per game.

“(I’m just focused on) staying healthy, making sure I’m locked in, ” said Gregory. “The season is a marathon and not a race. A lot happens between now and March, so I just do whatever I can to make sure that come game day we’re all locked in and focused and ready to take the court against our opponents.”

Rounding out the returning starters is Joah Logan. Logan started 31 of the 32 games for the Quakers, contributing 5.8 points and two rebounds per game.

Fellow junior Will Leckonby matched Logan’s 5.8 points per game, providing a spark off the bench at the shooting guard position. A Hickory, N.C. native, he added two rebounds per game.

Ward also added an offensive flash from the bench in 2018-19, adding 3.9 points and 3.8 rebounds per game. Ward started six games for the Quakers, but arguably had his best performance in the first round of the NCAA tournament.

Against the Sewanee Tigers, Ward put in 10 points for the Quakers, hitting two three-pointers. In addition to his scoring, he dished out four assists and four rebounds.

“I think that I need to continue staying confident and positive throughout the season, no matter what is happening during the games,” said Ward. “As our coach says, it’s easy to be positive and happy when things are going well; it’s how you respond when things are not going your way that matters.”

Gore emphasized the importance of focus .

“‘Locking In’ is our motto for the season. Every practice we have a certain level of focus and lock in on what we are trying to achieve,” Gore stated. “Each team we play is different and there are different ways we scout, so if we can continue to focus we can improve each day.”

The team has garnered attention from D3hoops.com’s Top 25 Poll. The team landed in the 19th position in the website’s preseason ranking.

In the loss, Leckonby scored six points and added a steal. Gore put in two baskets and pulled down two rebounds, while also dishing out two assists.

Editor’s note: This story originally was published in Volume 106, Issue 5 of The Guilfordian on Nov. 8 2019.