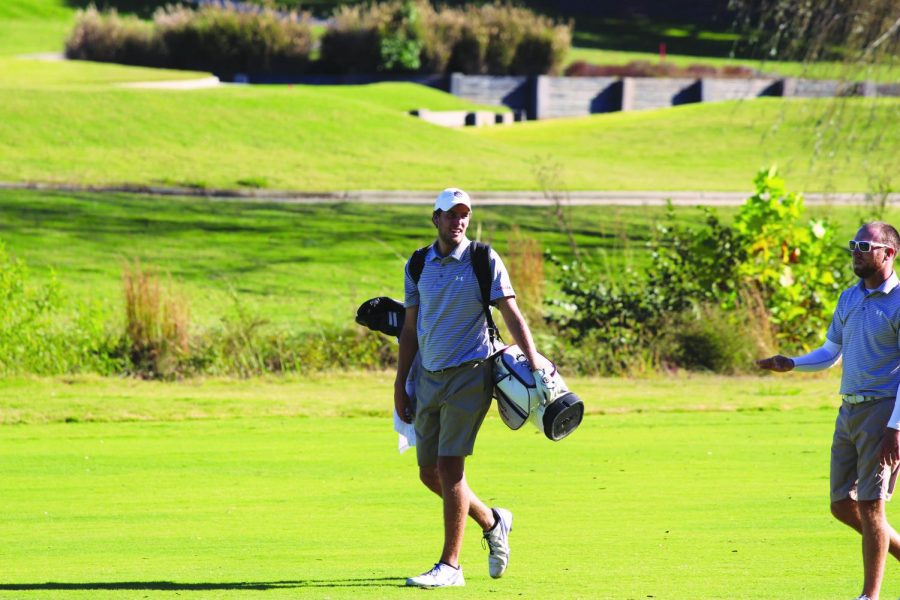 Junior Louis Lambert strolls down the fairway. // Photo by Trey Kawugule // The Guilfordian

The golf team recently returned from Golfweek Division III Fall Invitational. Their uncharacteristic slow start on day one ended up being their downfall.

Senior James Mishoe was the team’s highest finisher in 16th place, sitting at 214 after 54 holes. Mishoe’s performance was highlighted by a hole in one he carded in the second day of play.

The week prior, the Quakers competed in the Royal Lakes Fall Golf Invitational, where they came up short against a red hot Hampden-Sydney team. Senior Zach Evens led the team, finishing three shots under par and earning a share of ninth.

“Although we got off to a slower start than we expected, we have seen improvements as the tournaments are progressing, and I believe we are trending in a positive direction,” said junior Louis Lambert.

“This season has been a mixed bag,” Evens remarked. “Coming into the season ranked as the fourth team in the country according to the coaches poll to finish 11th and 13th in our two biggest events of the fall was disappointing.”

In preseason NCAA Division III Bushnell Golfweek Coaches’ Poll, the team placed fourth. Most recently the team has been placed at fifth in the nation, in the same poll.

So far this fall the team has competed at three tournaments. The highest finish of which came at the Royal Lakes Fall Golf Invitational.

Mishoe, an NCAA Division I transfer has earned a 71.8 stroke average this fall. That mark is currently less than a stroke off of his school record, 71.2, during the 2018-2019 campaign.

“Work ethic has led to success with my teammates constantly pushing me to be a better person and player,” said Mishoe. “I’m going to try and get better and grow as a player as the season continues.”

“I have been very diligent and efficient with my practice and preparation,” Evens remarked. “This fall has been extremely busy for me with other activities, so I have not had the luxury of spending hours and hours on the driving range perfecting my swing.”

“That forces me to be extremely focused during the time I do have to practice, which has led to some success on the course,” Evens said. “I am far from perfect though. Continuing to hone in on the practice and preparation routines that benefit me most will help me accomplish the lofty individual goals I have set for myself.”

Manring is third on the team earning 74.25 stroke average. Manring shared a piece of the 14th spot with Mishoe in the team’s most recent competition.

In other upcoming action, the team will host their annual O’Briant Jensen Memorial tournament. The tournament takes place Oct. 28 and 29 at local course The Cardinal.

Last year the team captured their first O’Briant Jensen title since 2011. The Quakers shot an even-par 287-281-568 over 36 holes to bring home the hardware.

The top 10 finishers were loaded with Quakers, as Manring came eighth and Jack Lee finished fifth. In addition, Mishoe and Louis Lambert shared second place, coming in one under par.

Since the team’s home tournament at the end of October will be the conclusion of their fall season they are aiming at finishing strong going into their mid-year break. Their play will resume in early March when they travel to Savannah, Georgia for the Savannah Harbor Classic.

“The obstacle for us to avoid is going to be not letting my attitude getting in the way of playing golf,” said Mishoe.

“It takes a lot of time, effort and commitment to get to the level that we know we are capable of,” said Lambert. “If we want to win a championship, there is no room for laziness within the team.”

“Our biggest challenge (going forward) will be staying focused on the process,” said Evens. “In golf, as with any sport, it is very easy to be too results oriented, which can put a lot of unnecessary pressure on us to perform.”