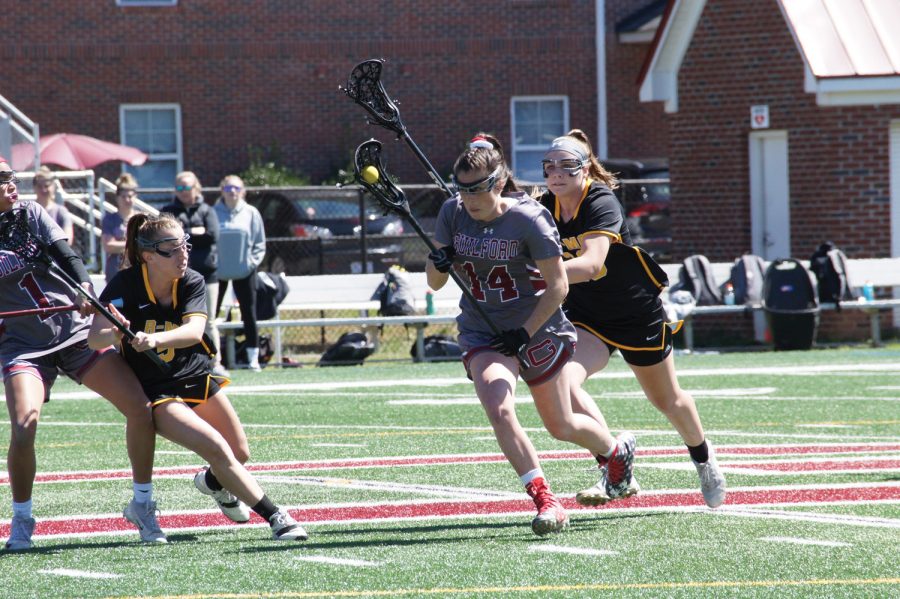 With the spring athletic season nearing playoff time, the Guilford College women’s lacrosse team has a current overall record of 6-6 and is 1-4 in the Old Dominion Athletic Conference (ODAC). The team has been working hard throughout the season and intends to finish out strong.

All the players on the team have put in the time and dedication it takes to playat a college level. The coaches have been working just as hard to make this season go by the way it has, although the outcome may not be where they hoped. “This team comes out every day to compete,” said Head Coach Charlotte Dixon.

Charlotte Dixon has been the Guilford College women’s lacrosse coach for two seasons, before which she was assistant coach for the team.

“One of the things I’m most proud of is that the entire team is bought in to the program we’re trying to run. We’ve implemented some unusual things this year that have helped our team tremendously, but it wouldn’t have worked if the team wasn’t brought in,” said Dixon.

Many of the players have been focused on being the best team they could be and work hard to make their way to the ODAC. While being on a team, there are many different characteristics and experiences that can create new opportunities for players in many ways.

“The biggest thing I’ve learned is to not focus on the little things, but the end goal: winning,” said first-year Hannah Preston. “We found we are most successful when we focus on one goal instead of dwelling on the little things we could have done better. It allows for constant positivity and the ability to always work with your teammates for the goal.”

The Quakers offense has been led by sophomore attacker Audrey Helfenbein and junior midfielder Madison Iandoli. Helfenbein’s 24 assist this season are a team-high and sit fourth in the ODAC. Iandoli is tied for the team lead with 31 goals and has added in 14 assists.

Senior midfielder Holly Kozak has proven herself both on the field and off the field in her final year. Netting 31 goals and dishing out three assists, her abilities and skills only continue to grow as this season progresses.

“I will miss knowing everyone and having such close relationships with people most about Guilford,” said Kozak. “In terms of lacrosse, I will definitely just miss us spending time together on and off the field on a regular basis.”

For any senior, it will be hard to leave the place that they have called home for the past four years and all the people who have been through the same journey. Guilford will be losing five seniors and will have to adjust next year.

The Guilford College women’s lacrosse team has only four matches left in the season, all at home. This will hopefuly give the team home field advantage they need to come out on top, as they already have a 5-2 record so far at home. The team will be playing their next game on April 13 against Bridgewater College as they look to get a win and move up in the conference standings.

“My hope for the rest of the season is that we can continue to build on the momentum we’ve created in the first half of the season,” said Dixon. “As we move forward into conference play, I hope to see our entire game come together so we’re able to get the wins we need to make the conference tournament.”