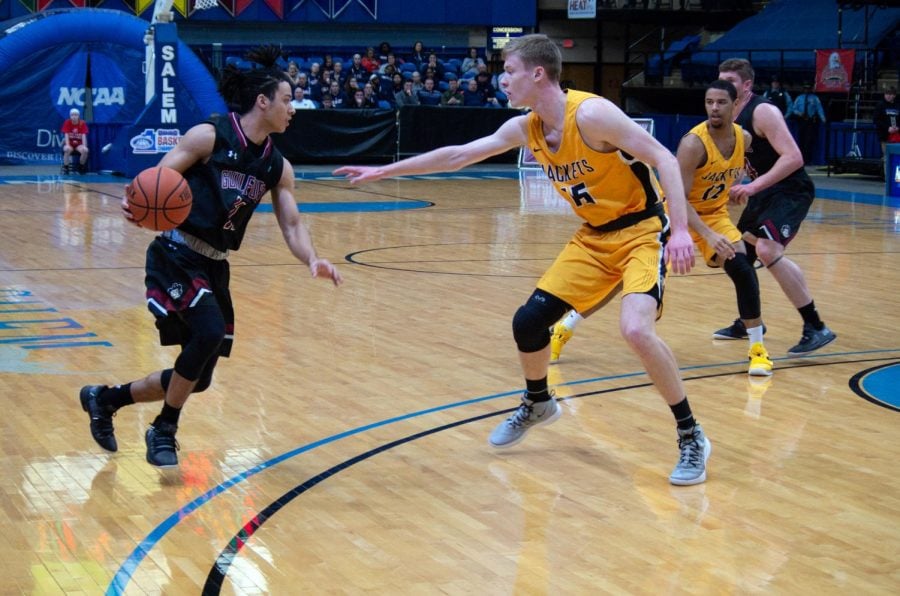 Redshirt sophomore guard Jaylen Gore drives against Randolph-Macon College in the ODAC Tournament Championship game on Feb. 24. Guilford plays University of Wisconsin-Oshkosh at 8:00 p.m. in the Quarterfinals of the NCAA DIII Championship for a place at the Final Four next weekend. (File photo)//Photo by Andrew Walker/The Guilfordian

Guilford College and the University of Wisconsin-Oshkosh play tonight in the quarterfinals of the NCAA Division III Men’s Basketball Championship.

51 years ago, the Quakers and Titans met on the court in the 1968 NAIA National Tournament First Round with the Titans pulling out a 70-68 victory.

Guilford is coming off an impressive upset over the 13th-ranked St. Thomas Tommies last night. Junior forward Kyler Gregory had his 10th double-double on the season with 25 points and 11 boards.

Guilford allowed the Tommies to shoot nine-of-19 from beyond the arc in the first half but the defense stepped up in the second half.

The Quakers used their balance and depth against the Tommies and look to use it against the Titans. Curry puts in 15.4 points per game and Long adds 12.6. The Quakers’ Gregory averages 13.0 and 8.2 rebounds per game. Gregory has double-doubles in the last five games.

Gore averages 10.1 as well as 4.2 assists this season. He is scoring 15.3 points per game over the last four games.

With an offense scoring 73.6 points per game, the Quakers shoot 43.7 percent from the field and 33.4 percent from beyond the arc. Sophomore guard Will Leckonby leads the team with averaging 1.8 three-point makes per game on 33.1 percent shooting. Curry (39.8%) and Gore (42.0%) shoot well from the three-point line for Guilford as the team makes 7.5 per game.

Guilford made only one three-pointer in the first-half against St. Thomas but hit six in the second half and shot 46.7 percent in the game from the three-point line.

Gregory anchors the offense in the post but can also step back and shoot from long-range. He shoots 52.7 percent from the field and is eight-of-20 from beyond the arc.

The Quakers lead Division III with pulling down 1,375 boards this season. They have outrebound opponents by an average of 11 per game, third-best margin in the country. The Quakers dominated on the boards with a 42-27 advantage over St. Thomas.

Gregory, Curry (7.1) and Long (6.1) crash the boards for the Quakers. Gore adds in 4.1 a game from his guard position. First-year forward Liam Ward pulled down six rebounds off the bench against St. Thomas.

The Guilford defense has held opponents to 64.6 points per game and shooting 37.5 percent, which is third-best in Division III.

After downing a St. Thomas offense that shot a lot of three-pointers, the Quakers will face another one in UW-Oshkosh. The Titans average 10.1 makes from beyond the arc per game and shoot 37.2 percent. The team shoots 47.4 percent from the field and averages 83.9 points per game.

UW-Oshkosh is coming off a 86-75 victory over Loras College. Sophomore guard Connor Duax led the Titans with 26 points on nine-of-14 shooting. He was three-of-six from beyond the arc and five-of-11 from the free-throw line. Senior guard Ben Boots added 15 points on four-of-11 shooting.

The Titans used their 10 three-pointers to Loras’ three makes, to take the victory. UW-Oshkosh attempted 35 free-throws but only made 22 of them.

Boots, the Wisconsin Intercollegiate Athletic Conference Player of the Year, leads the Titans with scoring 16 points and dishing out 4 assists per game. Junior center Jack Flynn add in 14.8 points per game in the post. Junior forward Adam Fravert (14.2 ppg) and senior guard Brett Wittchow (13.9 ppg) are the top three-point shooters for the Titans. Wittchow shoots 40.6 percent and Fravert shoots 38.6 percent form beyond the arc.

The Quakers will have a tough battle on the boards as the Titans have a 9.3 rebounding margin, eighth in Division III. UW-Oshkosh has outrebounded 28 of its last 31 opponents.

Flynn leads UW-Oshkosh with 8.0 rebounds per game including 3.5 offensive boards. He had 13 rebounds, including 7 offensive, in the victory over Loras. Fravert pulls down 7.0 a game in addition to his scoring.

The Titans have some depth but only six players score more than 5 points per game. This will be different for Guilford to defend after facing a very deep St. Thomas team that had nine average at least 5 points a game. The starters for the Titans score most of their points, they only had 15 bench points in the win over Loras.

Last year, UW-Oshkosh reached the championship game where they fell to Nebraska Wesleyan University.  The Quakers last reached this far in 2010, when they lost in the semifinals.

Guilford will need to play a complete game and dominate the boards to pull out another victory to upset the #4-ranked team in the country.

The Quakers and Titans face off today at 8:00 p.m. (EST) at the Kolf Sports Center at the University of Wisconsin-Oshkosh. The winner advances to the Final Four at the Allen County War Memorial Coliseum in Fort Wayne, Ind., next weekend.

A livestream of the game is available on the UW-Oshkosh website and Guilford College is hosting a watch party at GIBBS Hundred Brewery on 504 State Street, Greensboro.