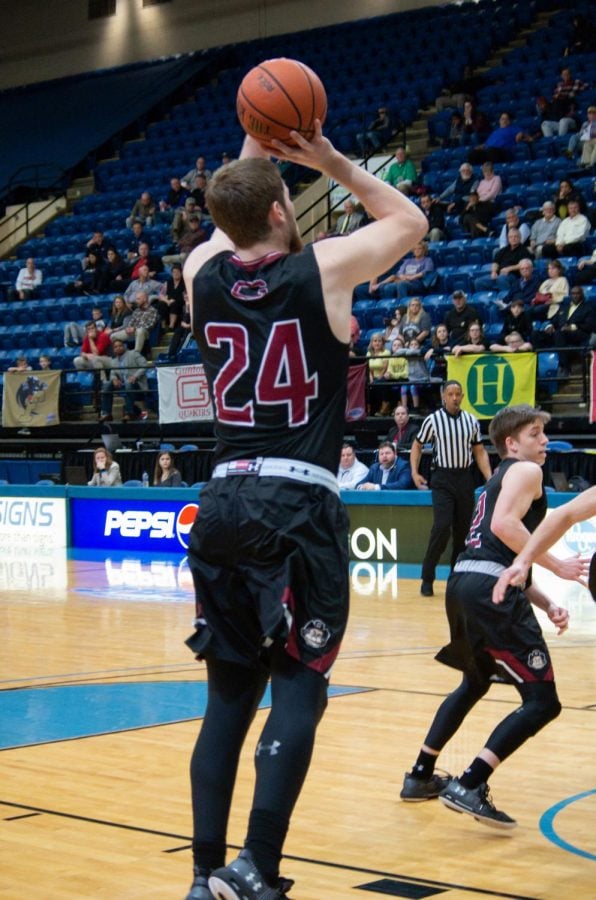 Junior forward Adam Fravert led the Titans with 26 points, including six-of-seven from beyond the arc.

The unranked Quakers made a comeback in the second half but missed two three-pointers in the final seconds to drop the game.

“We were trying to foul and we didn’t get the foul so they got the layup,” said Guilford head coach Tom Palombo. “We didn’t have any timeouts, we were down three but Kyler had done such a  great job and he was being guarded by their big guy who didn’t move very well and we had some success running Jaylen off that screen where that guy had to help a little bit and throw it back to Kyler. Kyler got a great look, it was almost in and then it came back and Jaylen got a great look.”

“Probably one of the toughest matchups I’ve had all year, Jack (Flynn), he was hard to keep from catching the ball, hard for rebounding and I was just trying to what I had to do,” said Gregory.

The Quakers scoring leader and senior forward Marcus Curry fouled out with 5 minutes remaining, he only scored four points.

Guilford kept the game within 10 for the entire second half but only got within one point.

The Quakers started the game cold, trailing by 14 with 12:34 remaining in the first half. UW-Oshkosh made seven of their first 14 shots.  The Guilford defense left open three-point shooter on multiple occasion and the Titans hit eight-of-16 three’s in the first half.

Fravert led the Titans with 13 points at the half on three three’s. First-year guard Eric Peterson hit all three of his shots from beyond the arc to add in 10 points.

“It didn’t get away from us, we were only down 10, we felt pretty good about that,” said Palombo. “We talked about it at halftime, we’ve been there before and it was just yesterday and so it wasn’t the 10 points, it was more how we were playing, we needed to turn that around, and we did. I thought we did a great job in the second half.”

Long tried to keep Guilford in the game as he made two three’s.  Gregory had 14 points for the Quakers. Gore added in eight points and drew a charge on a rare show of full-court press for Guilford.

Guilford shot 37. 8 percent from the field and three-of-eight from beyond the arc in the first half. UW-Oshkosh shot 50 percent on the court and eight-of-16 from the three-point line.

“A little disappointed in how we played in the first-half, just defensively we weren’t just very good,” said Palombo. “We were fouling, they were beating us off the dribble and we didn’t play defensive the way we had all year long.”

Guilford won the rebound and turnover battle but that did not turn into a win for Guilford.

The teams battled on the boards throughout the game with Guilford winning it 40-37. UW-Oshkosh committed 17 turnovers which turned into 17 Guilford points. The Quakers only had eight turnover but the Titans scored 11 points off of them.

The teams tied with 32 points in the paint and Guilford had 13 second chance points from 15 offensive boards.

UW-Oshkosh scored eight fast break points and had seven blocks on the game.

The Quakers struggled at the start of the season but improved throughout the season to make an unexpected run to the Quarterfinals.

“We had to dig deep, we had to do what we had to do and we turned the season around,” said Long. “If you were to say we made it to the Elite Eight I would have said I would  want to believe that but it’d been tough to believe it, but once we got on this roll I was like ‘yeah, we can do it,'”

Guilford reached the Quarterfinals of the NCAA Championship for the first time since 2010. The Quakers came into the game after knocking off the University of the South, #17 Wittenberg University and #13 University of St. Thomas (Minn.).

Wisc.-Oshkosh advances to play Wheaton College in the Semifinals on Mar. 15 at the Allen War memorial Coliseum in Fort Wayne, Ind..

Guilford ends the season with an 24-8 record. The senior class finishes with 79 victories, two ODAC Championships and made two NCAA Championship Tournament appearances.