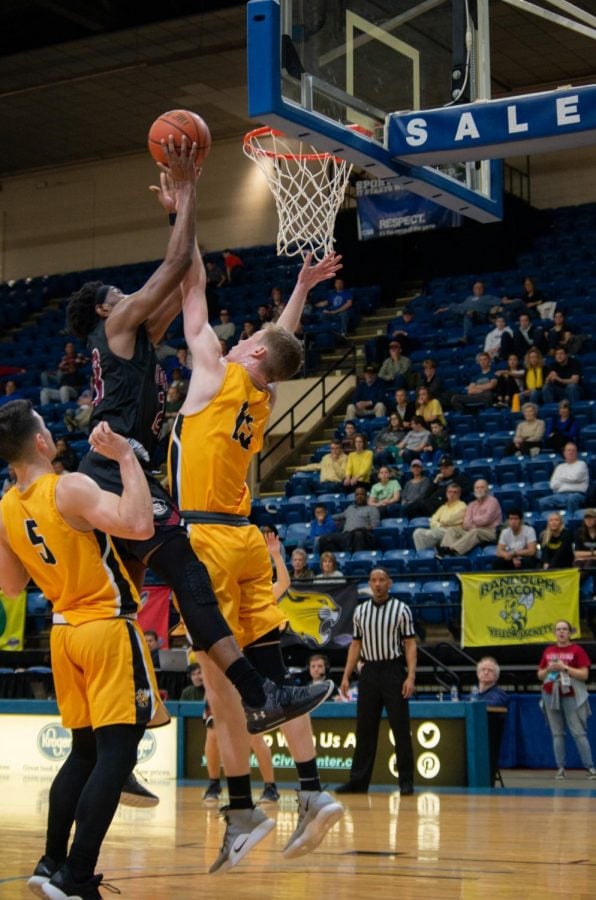 The teams have never played each other on the basketball court in their long histories but both of the teams made the 1967 and 1970 NAIA Championships.

Guilford reached the third round of the NCAA Championship after beating the University of the South (Sewanee) and Wittenberg University at home. St. Thomas (Minn.) beat University of Wisconsin-La Crosse and then the defending national champions Nebraska Wesleyan University.

Redshirt sophomore guard Jaylen Gore averages 9.9 as well as 4.2 assists. Gore is averaging 13.8 points over the first two rounds of the NCAA Championship and the three games of the Old Dominion Athletic Conference Tournament.

Guilford has used its depth on the team this year with ten players playing in at least two-thirds of their games. Sophomore guard Will Leckonby and junior center Steve Ruszala have appeared in all 30 games off the bench. Leckonby averages six points in 17 minutes per game.

“Everybody’s kind of bought into their role and when they come into the game they have really given a lot,” said Palombo. “They understand what they need to do.”

With an offense scoring 73.4 points per game, the Quakers shoot 43 percent from the field and 33 percent from beyond the arc. Leckonby leads the team with averaging 1.8 three-point makes per game on 33.1 percent shooting. Curry (39.8%) and Gore (40.9%) shoot well from the three-point line for Guilford as the team makes 7.5 per game.

Gregory anchors the offense in the post but can also step back and shoot from long-range. He shoots 52 percent from the field and is eight-of-19 from beyond the arc.

The Quakers focus a lot of their effort into rebounding, they lead Division III with pulling down 1,333 boards this season.

They have outrebound opponents by an average of 11 per game. Over the past two games they have outrebounded their opponents 97 to 49 overall and 27 to nine on the offensive glass. Guilford had 22 second-chance points in each of the games against Sewanee and Wittenberg. Gregory, Curry (7.1) and Long (6.2) crash the boards for the Quakers. Gore adds in 4 a game from his guard position.

The Guilford defense has held opponents to 64.3 points per game and shooting 37.5 percent, which is third-best in Division III.

The Quakers defense will have to show up to try and defend the high-powered offense of St. Thomas. The Tommies average 84.9 points per game, 34th in the nation, and make 11.2 three’s a game. The team also shoots a hair under 50 percent from the field at 49.6 percent, 19th in Division III.

Senior forward Connor Blair shoots 62.9 percent from the field and leads the team in scoring with 14.4. First-year guard Anders Nelson is the only other player in double-figures with 14.1.

Although the rest of the players do not average double-figures, seven players average over five points per game. Senior guard Michael Hannon shoots 38 percent from three, has made a team-leading 52 three’s and averages 8.9 points per game.

Sophomore guards Ryan Lindberg and Burt Hedstrom, as well as Nelson have each made at least 40 three-pointers this season. Of the top four three-point shooters on the team, Nelson has the worst shooting percentage at 37 percent. Five other Tommies have made at least 10 three’s on the season and all 21 players have attempted a three.

“They’re not just  a three-point shooting team , they can play in transition, push the ball hard for fast breaks and they play inside outside too, they’ve got some guys inside that can score in the paint as well, so you’ve got to defend the perimeter and the paint.”

Not only does St. Thomas shoot well, the Tommies don’t commit many turnovers, averaging a Division III low of 9.4 per game. Its assist to turnover ration of 1.89 leads the country. Guilford commits 15.5 turnovers per game and forces opponents to commit 13.

“St. Thomas goes to the boards really hard and they block out really well,” said Palombo. “Part of what we do is get rebounds, so we’re really going to have to work hard.”

Guilford will have to slow the Tommies offense down while also fighting through the St. Thomas defense.

The Quakers and Tommies face off today at 5:30 p.m. at the Kolf Sports Center at the University of Wisconsin-Oshkosh. The winner plays tomorrow against the winner of UW-Oshkosh and Loras College for a place in the Final Four at the Allen County War Memorial Coliseum in Fort Wayne, Ind..