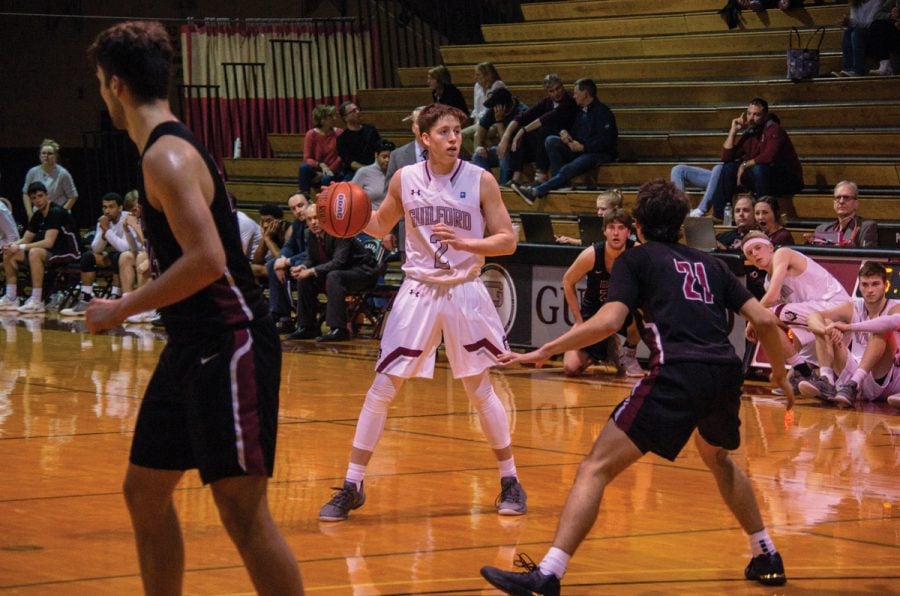 The men’s basketball team is on a roll again. A loss against Roanoke College on Dec. 9 ended the Quakers’ seven game win streak. In response, the team started a new one. The team has rebounded from that five-point home loss to win six in a row, the most notable of which was a tight 88-82 overtime win over the then 14th-ranked University of Lynchburg.

While winning 13 of their last 14 games, the Quakers have picked up ten conference wins, three wins that came against nationally-ranked opponents. The Quakers have also received votes for D3hoops.com Top 25 for three weeks in a row. In the NCAA Division III Regional Rankings, the teams was placed fourth in the South region.

The win over Lynchburg came as the eighth game this season in which the Quakers triumphed by 10 points or less. That comes in comparison to a mark of just five such wins in the 2017-18 season. What has been the difference down the stretch of those close games?

A theme that resonates throughout the team is the importance of defense. This year the Quakers have only allowed a stingy average of 65.7 points to be scored on them per game, a mark which is down seven points from the 2017-18 average of 72.8.

“We really believe in our defensive standards, and work on them every day”, said first-year forward Liam Ward.

This season many players have stepped into new roles. One such player is junior forward Kyler Gregory. On Jan. 28 he was named the Old Dominion Athletic Conference player of the week. During that week the junior averaged a double-double of 17.5 points and 10 rebounds and shot 56.5 percent. The two double-doubles recorded the prior week by Gregory were two of his team-leading five on the season.

“To me it’s just another day, it’s great that I won it, but really I have the best team behind me. If it wasn’t for them, it wouldn’t be possible,” said Gregory. “(I have been) just trying to do what I can to help the team win. I just want to do whatever I can to help produce.”

The team has few games remaining in the regular season. This team has fully embraced the work that it takes to succeed in a season that is winding to a close.

Currently the Quakers are second in the ODAC standings with four games remaining. The team continues to be led in scoring by senior forward Marcus Curry with 15.6 points per game.

In the rebounding department, Gregory is hauling in 8.2 per game while sitting in third on the team in scoring with 12.3 points per game. Junior guard Jaylen Gore has maintained his lead in assists per game, coming in at 4.3.

The team has two remaining regular season games in Ragan-Brown Gym, the first of which is Feb. 13 against Emory & Henry College.

The season closer is Feb. 16 against Washington and Lee University. The team’s four seniors will be honored prior to the final game.