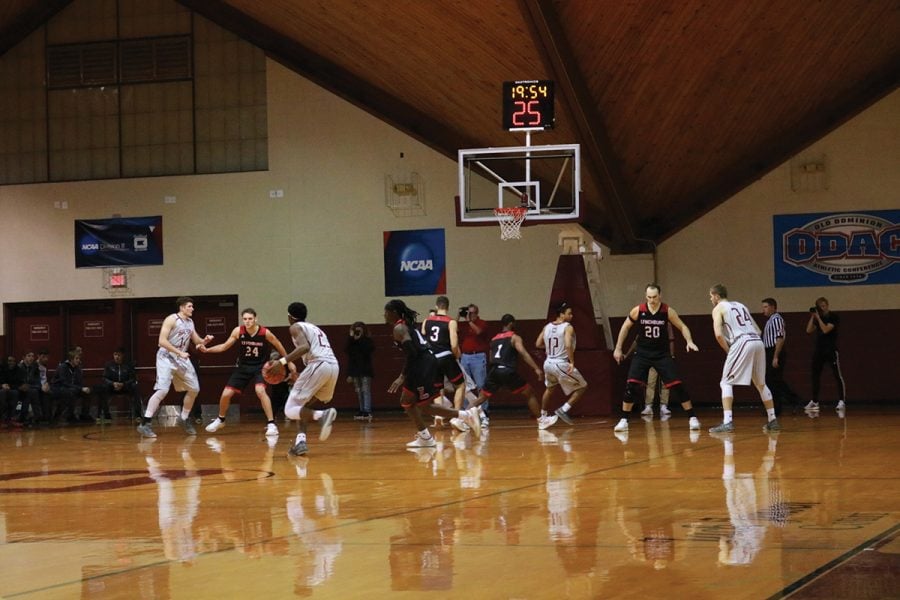 Guilford College men’s basketball team has started its season with a 4-4 record. The team broke a two-game losing streak with an 82-79 upset victory over 22nd-ranked University of Lynchburg. The Hornets were undefeated coming into the contest.

It was the first time since Jan. 22, 2012 that Guilford defeated a ranked opponent.

Guilford led at halftime and kept ahead for most of the second half. During the second half, the lead extended to 13 points, but the Hornets came back and tied the game with a minute remaining.  The game was tied with 32 seconds remaining until senior forward Marcus Curry made a three-pointer. After the Hotnets made a free-throw, Curry was fouled twice and made all four free-throws. Senior forward Connor Schroeder made a three-pointer to cut the Guilford lead to three with three seconds remaining before senior forward Carson Long sealed the victory with a free-throw.

Junior forward Kyler Gregory scored a career-high 21 points and made 12-of-14 free-throws. Curry had 22 points and seven rebounds to help the team. Junior guard Jaylen Gore added in 11 and Long put up 14.

The Quakers shot 83.9 percent from the free-throw line, making 26 of 31 attempts

This season, three of the losses have been by three points or less.

Guilford lost its first Old Dominion Athletic Conference game to Virginia Wesleyan University in overtime, 80-77. The Quakers led with six seconds left in regulation before the Marlins tied it up. Gregory opened scoring in overtime with two free-throws and a jump shot. The Marlins’ junior winger Lamont Steward scored five in overtime to push the home to victory.

Guilford won the first contest with N.C. Wesleyan before dropping the second matchup. A 60 percent shooting percentage from N.C. Wesleyan in the second half allowed the Battling Bishops to pull away from Guilford.

Junior guard Jaylen Gore averages 8.6 points and 3.9 assists per game, top on the team and fifth in the ODAC. Gore is shooting 87.5 percent from the free-throw line, making 21 of his 24 attempts.

Guilford will look to start a run of victories after the upset over Lynchburg.