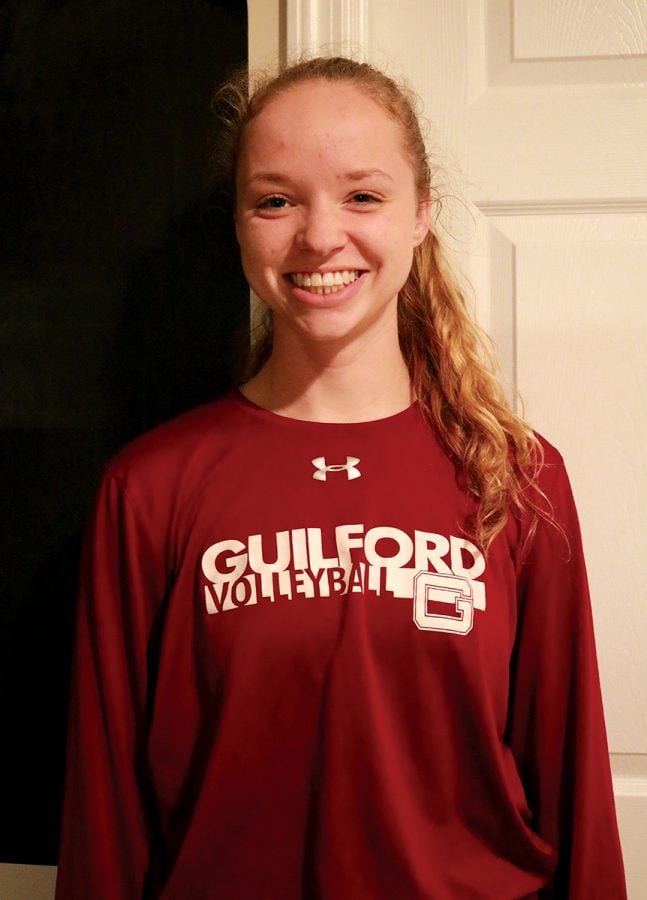 Junior outside hitter Morgan Tompkins poses for a photo.//Photo by: Abigail Bekele/The Guilfordian

For every college, student-athletes are seen as exemplary students who manage to commit their time to a certain sport while also excelling in academics. Some student-athletes are able to involve themselves deeply in their community while also having a positive impact on their team. For Guilford, junior Morgan Tompkins is an example.

As a part of Guilford’s women’s volleyball team since 2016, Tompkins has taken part in over 70 matches as an outside hitter. This season, Tompkins stood second on the team with 244 kills and 2.42 kills per set, having 13 matches this year with over 10 kills. She has the seventh-best single-match hitting percentage in school history and has amounted almost 600 kills in the past 3 seasons.

Outside of the volleyball team, Tompkins is involved in various other organizations and extracurriculars.

As a member of Guilford’s Christian Ministry Club, she and other members of the club gather for weekly worship services and leadership breakfasts.

“We collaborate with organizations at Guilford and the larger Greensboro community to discuss important issues and meet the needs of the less fortunate,” said junior Logan Shortt, President of the Guilford Christian Ministry.

For Tompkins, the Guilford Christian Ministry is more than just an organization.

“I think Guilford Christian Ministry has helped me the most as a person,” said Tompkins. “It’s helped me grow deeper into my faith and its shaped everything else in my life.”

“Morgan has a great work ethic both on and off the court. She’s very dedicated to her academics and putting in the effort to maintain her grades,” said Julia Mainwaring, assistant volleyball coach. “She knows how to manage her time, especially in season, to fit in class, practice, work, homework and all of her extracurriculars. This sets a high standard for the rest of the team, but is also a great example of how the student-athlete balance can exist in a college experience, especially in Division III athletics.”

Within the team, Tompkins emphasizes the importance of collaboration.

“(Volleyball) taught me a lot about leadership. It’s taught me a lot about selflessness and sacrifice,” said Tompkins. “Being on a team, it’s not about you anymore, it’s about everyone else. Everyone’s part of the team. Learning how to be a good leader and to still be selfless has been really impactful.”

After graduating, Tompkins has plans of studying about public policy and working as a government official at the state-level.

“Morgan is above reproach. She is down-to-earth even though she is often one of the smartest people in the room. She is kind and personable, someone who leads by example,” said Shortt. “Morgan is an exemplary student-athlete. She has learned to balance a myriad of responsibilities and excel at them all. Guilford needs dozens more student-athletes and campus leaders like her.”