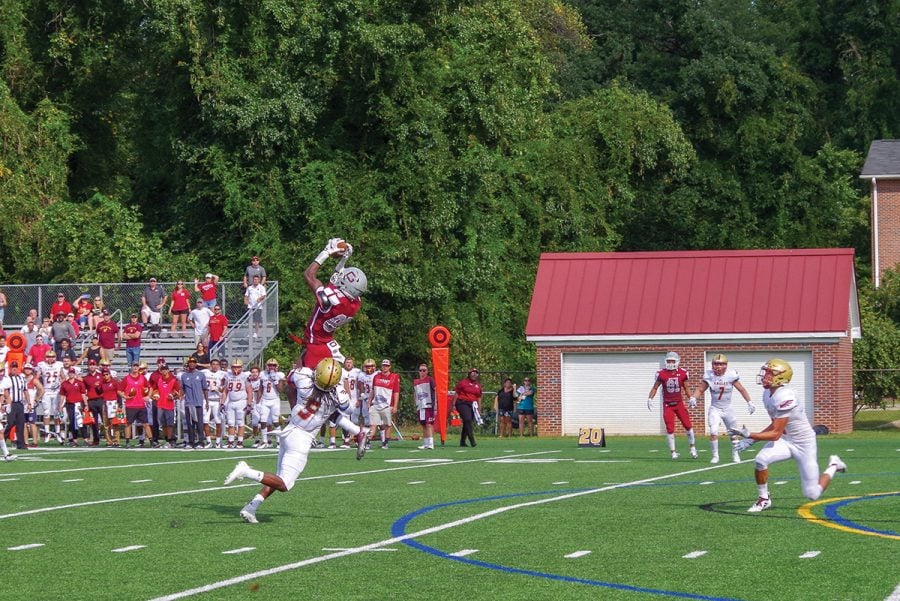 Guilford College football dropped its first conference game of the season to Bridgewater College, 30-28. The Homecoming crowd witnessed an interception by the Eagles in the last second on the game to seal the victory.

Bridgewater junior kicker Logan Weis made a 41-yard field goal with 3:04 left in the game to put the Eagles ahead.

Guilford led 21-15 at half, before Weis made three field goals and a touchdown pass by senior quarterback Jay Scroggins put the Eagles on top. Guilford’s lone score in the second half came on a 48-yard run by redshirt senior running back De’Eric Bell.

Guilford sophomore quarterback Alex Manley threw for 208 yards and a touchdown but had three interceptions. Bell had 95 rushing yards and two touchdowns in the loss.

Guilford posed a threat in the last minutes of the game with a 24-yard pass to senior wide receiver Montek Johnson, putting Guilford at the 14-yard line. On the next play, Bridgewater sophomore defensive back Dustin Green intercepted a pass by Manley to end the game.

Guilford looks to break its two-game losing streak at Randolph-Macon College on Oct. 6 and return home on Oct. 11 to face Ferrum College.