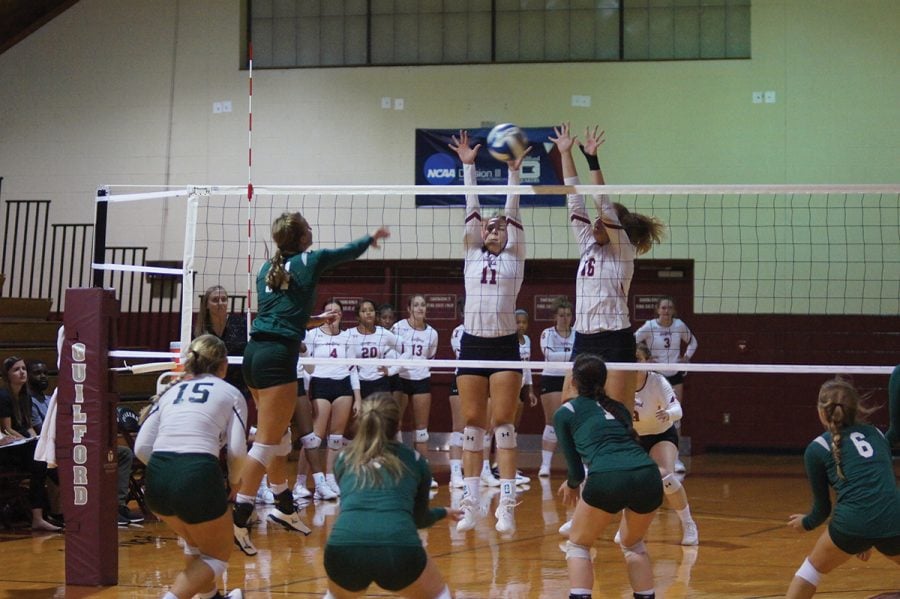 The Guilford women’s volleyball team, run by head coach Emily Gann who is now leading for her 13th season, is off to a solid start this year with seven wins and four losses. The girls suffered their third loss in their first Old Dominion Athletic Conference match against Washington and Lee University on Wednesday, Sept. 21 after taking them to five sets. Despite the loss, the team fought hard against this difficult rival that Guilford has not won against since 1997.

In addition to the loss against Washington and Lee, Guilford has also suffered loses in games against Southern Virginia University (3-0), Averett University (3-1) and Maryville College (3-1). Gann said that during those first two losses the athletes were exhausted after playing for about five hours straight and winning two five set matches the day before. Going into those games with such fatigue made it difficult for the women to continue their winning streak and secure subsequent successes.

“The biggest challenge we’ve faced so far this season is getting really tired after playing for a while and we lose our energy as a team,” said first-year outside hitter Makayla Felton.

Though their last game may have been a loss, the team came away from it as a more cohesive unit.

“We grew tremendously as a team,” Gann said.

She also said that the real heroes of the match were not necessarily the girls on the court, but the ones on the bench.

“They were so encouraging and created such a great atmosphere on the road,” said Gann “We only had five fans in the stands for us, so having your team being your cheerleader and really encourage you was amazing.”

Gann has had some standout players on and off the court return from last year. For on-court athletes, she mentioned junior all-conference players Tina Eucker and Christian Ritter.

“Tina is a returning setter,” Gann said. “She was all conference this past season and has continued to lead us as a five one setter. She’s just a great all-around hitter.”

“Her (first-year) year she actually started out as a defensive player,” Gann said. “Mid-way through the season we had an injury and had to make her a hitter and now she’s an all-conference hitter.”

Both girls are more than just athletes here at Guilford, they are also involved on campus.

Junior outside hitter Aeryal Ceasar actively participates in campus life and is a big contributor to team morale. On game days she greatly supports the athletes.

“(Ceasar) is such a huge voice and the hype-man for our team and I don’t think we would have done what we did last night without her,” Gann said referring to the match against Washington and Lee. “She’s just such a huge part of who we are.”

Ceasar also feels this sense of community as a team member.

“We all are close on and off the court and I really feel like me and my teammates are going to be lifelong friends,” she said.

The Guilford volleyball team intends to keep working toward and hopefully achieve their ultimate goals, but more than that the athletes and coach Gann want to keep growing together as a team. By taking each match one at a time, playing their hardest and always seeking to improve, the team is looking to have a great season.