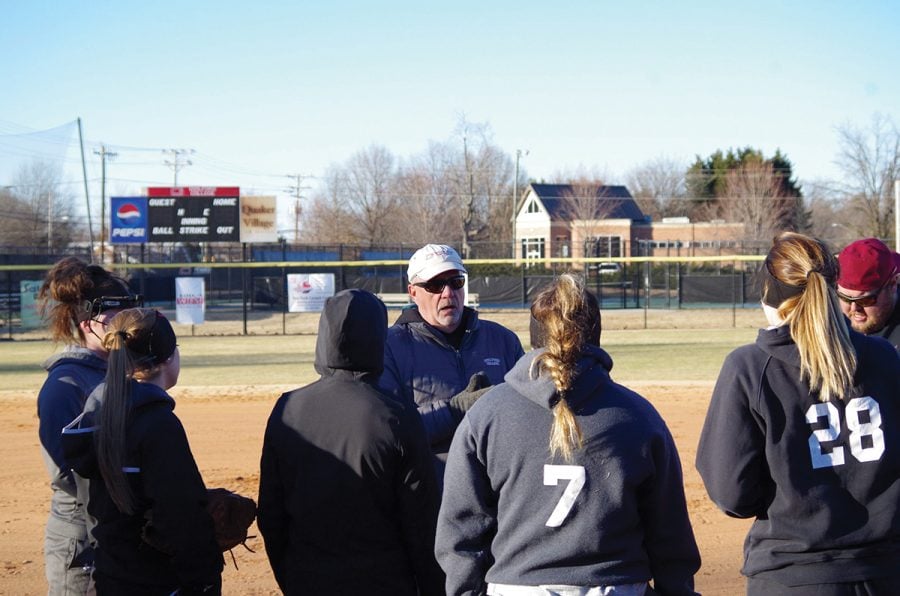 Recently, Greensboro approved the rezoning of the planned location from residential to public use land, the same as the rest of the Guilford College.

The location that is being planned is a wooded area north of the East Apartments and east of the Armfield Athletic Center. The area that will be landscaped is 10.5 acres; 1.8 acres of that will be for the softball field and 0.5 for parking.  The rest of the acreage will be replanted in trees.

“This (location) has very few hardwoods and also (has) got all kinds of brush in it that is really killing off the trees and we have actually planted more trees. We’ve probably planted two times more the number of trees this year than we’re going to cut down in this acreage,” Vice President of Administration and Finance Len Sippel said.

Although the proposed location is not the ideal place, it was the only location available. Other places that were considered included near the lake and the Alumni Wedge Range, but the softball field would not fit in those locations.

“We searched around for a place that where it would fit and there weren’t any good spots,” said Sippel. “If we start ripping down buildings someplace, I suppose we could find a spot for it, but that’s not realistic either.”

While there have been many improvements to the current field, the field does not meet the NCAA standards and is grandfathered in.

“It was built before the new rules took effect, (the distance) is about 20 feet shorter,” said softball head coach Dennis Shores.

The field also does not have much room to increase the size or make large improvements.

“Even if you were to totally rip it apart and reorient it, you still can’t put any facilities out there because there’s no sewer running out there,” Sippel said. “Of course, you want to try and treat all of the men’s and women’s sports equally. So, why does baseball get to be next to the locker rooms and softball is going to be stuck way out on the edge of campus?”

The current field is next to New Garden Road and cars driving by have been hit by softballs.

“The biggest problem is hitting too many cars. I think we hit six last year, fortunately they weren’t serious,” said Shores. “It’s only a matter of time when a serious accident is going to happen.”

Building the new field will allow improvements that the current field cannot accommodate.

“It’s going to be more of a stadium effect, all the bleachers are going to be put together,” said Shores. “They’re going to be raised higher than the playing surface itself, just for better viewing.”

The team will have a batting cages and a team room, similar to what the baseball team currently has. The field will have a dirt infield and an artificial grass outfield.

“I have dreams of wanting to do some things with the facility and I just don’t know exactly what the funding will allow, how far can we expand the mission to make it a state-of-the-art,” said athletic director Sue Bower.

Details about the field’s amenities are still being finalized, but the projected costs are estimated at around $1 million.

“We’re going to be fundraising for some of (the funding),” Sippel said. “We’re doing a bond issue right now for $30 million and that will fund the pieces that we can’t fundraise.”

In addition to the softball field, the $30 million bond issue will finish paying for renovations to Binford Hall, Hege-Cox Hall and women’s locker rooms, as well as finance upcoming renovations in Milner and Bryan Hall.

The field will have a parking lot that will connect to Dolley Madison Road and a bridge over the stream to allow people to walk to and from campus.

“I’m happy for the softball program,” said Bower. “I can’t say I had a thing to do with it because I didn’t, but I’ll have a lot to do with it going forward in terms of the actual execution of the project.”