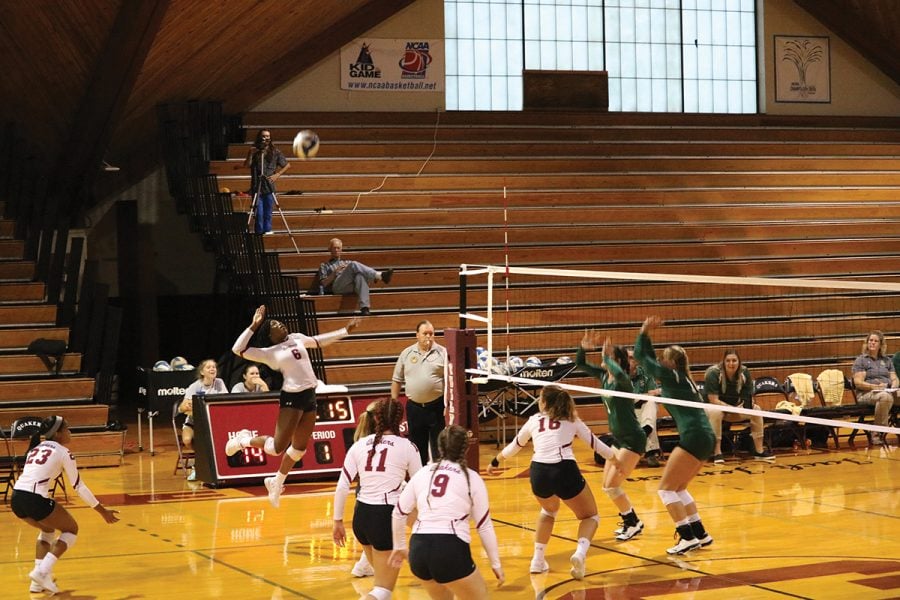 Junior outside hitter Christian Ritter jumps to hit the bakk against Methodist University on Sept/ 5. // Photo By Abigail Bekele/The Guilfordian

Nov. 1, 2017. Guilford’s volleyball is matched up against second-seeded Washington & Lee University in the quarterfinals of the Old Dominion Athletic Conference tournament. Five days prior, they had just broken a four-game losing streak with a 3-0 win over Hollins University on senior night.

Washington & Lee swept the Quakers in the match and Guilford’s season came to close. They finished tied for sixth in the ODAC, the same position they were ranked in the preseason poll. Now, in 2018, Guilford is looking to break expectations.

They were once again tabbed to finish in the middle of the pack of the conference. Head coach Emily Gann’s team ranked seventh in this season’s preseason poll, but their out of conference play shows they may be better. The team is currently 6-2 and players accredit their mental game to the strong start.

“Our big thing for the season is MCD: Motivation, Commitment and Discipline,” said junior outside hitter Morgan Tompkins. “In working toward our goals, we have to maintain these three values every day. This means working hard on every rep even in the drills that seem mundane and staying disciplined through those as well. (We also) apply this to life outside the game as a way to help us focus on our game by eliminating extra stress.”

Tompkins has been able to see the team’s progress over her career at Guilford. She appeared in all 26 matches as a first-year player in 2016 and was a regular starter last season.

“I think we are all much more collective in our goals for the season,” Tompkins said. “There is a lot more heart in our game because we all want an ODAC championship. There are more efforts being made to understand each other both as a person and as a player, which really adds to the team chemistry.”

The team’s chemistry was a major focus point for the Quakers’ transition into the 2018 season. Guilford is hoping their off-the-court chemistry can have an impact on their performance during matches.

“I feel like this year’s leaders are really invested in the team on and off the court,” said junior defensive specialist Christian Ritter. “We try to create a space that is comfortable for everyone. That hasn’t always been the atmosphere of the team in the past.”

Tompkins highlighted the importance of good chemistry as well and how it has helped the transition for first-year players.

“The (first-years) have just meshed together very well, which has been awesome to see,” Tompkins said. “The attitude in the gym is light and focused, which definitely helps us as we work and prepare for games. There’s just a new energy that has really taken everyone and pushed us to be what we really can be as a team.”

Despite the improvements, Ritter feels that there is still work to be done before going into ODAC play.

“We need to improve communication,” Ritter said. “Although our record so far is pretty solid, we still haven’t made the proper connections on the court that we really need to execute intensely once conference play starts.”

Gann has preached discipline as a major point of focus for the team as well.

The mindset of the team seems unified as they approach conference opponents.

“Even though we aren’t where we want to be, we are still a team,” Humphreys said. “We have not fallen apart and played as individuals like we have in the past.”

Guilford returns to action Sept. 23 where the Quakers hit the road for a dual match at Emory and Henry University, where they take on the host college along with Maryville College (Tennessee).