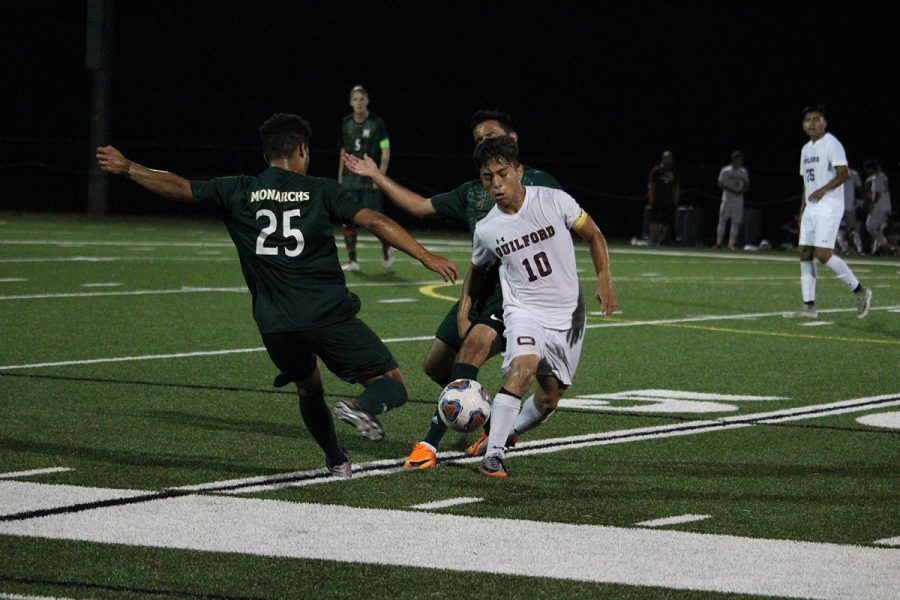 Guilford College men’s soccer junior midfielder Ricky Aguilar fights for the ball against Methodist University on Sept. 5 at the Armfield Athletic Center. Aguilar led the Quakers last season with five goals and was second in assists with two. // Photo courtesy of Guilford Athletics

The Guilford College men’s soccer team only played four games this season, but it already has won more games than last year.

The men’s soccer team won its first three games of the season and then dropped the next game to Averett University, 1-0.

“Positively so far, we’ve done quite well,” said head coach Cory Speed. “I think we’ve played well in two of those games and just okay in the other two, so three and one is good.”

In the nonconference schedule last year, the team lost all nine games and only scored five goals while giving up 21 goals.

Through four games this season the team has scored nine goals, while last year the team only scored 15 goals in 18 games.

“We started zero and nine last year and we started three and zero this year,” Speed said. “Not just from a results standpoint but we’ve created tons of chances, tons of good scoring opportunities, the guys are playing with more intensity on both sides of the ball.”

Eight different players have scored for the Quakers with only first-year midfielder Giovanni Santibanez scoring two.

“We’ve scored a few goals in the first games that have come from a lot of things we’ve been working on in the spring and the fall,” Speed said.

The team is focusing on scoring a lot of goals. The offense has been the main focus, as they have moved to a three-man defense, four midfielders and three forwards. The goal of the increase in offensive personnel is to create a lot of chances to score.

“(We had) a little bit of a shift in both tactics and overall philosophy of what type of a team we wanted to be,” said Speed. “That stuff just takes time to figure out and develop so I think this is kind of how I’ve always wanted to play and to attack.”

The team started out the season with a 3-2 victory over Huntingdon College in Alabama. The offense started quickly, scoring three goals in the first 28 minutes of the game from senior defender Matt Wisniewski, first-year Louis Gozan and Santibanez.

Guilford squeezed a 2-1 victory over LaGrange College with a goal from first-year Rodrigo Gudino in the 105th minute.

Many new faces that have joined that team have been getting opportunities to play and a few have scored goals.

“A lot of the players that just joined the program look really sharp,” said Speed. “We’re incorporating about nine to 10 new players that are playing significant minutes for us.”

While the team has been focusing on offense, the defense has had to adapt to only have three players and being less capable to defend the goal.

“With how poorly we did [last year], I think that was the trigger from okay we need to score goals to win games so we’re going to,” said Speed. “If we have to win games four to two, or four to three, or three to two, or whatever it is, we were okay with that whereas in the past maybe we tried to win games and keep things tights, one nil, two one.”

The Quakers were picked 11th in the Old Dominion Athletic Conference preseason poll but hope to do better than that. Speed expects the team to place somewhere from fifth to eighth but hopes for an even better placement in the competitive ODAC.

“I think our target is to finish somewhere in that mid-table range, so anywhere between five to eight is our target,” said Speed. “We don’t really know what our ceiling yet is because we’re still missing a couple key players due to injury.”

Guilford’s next game is against Southern Virginia University on Monday, September 17 at 7:00 p.m. in the Armfield Athletic Center.