Football game one: The game that never happened 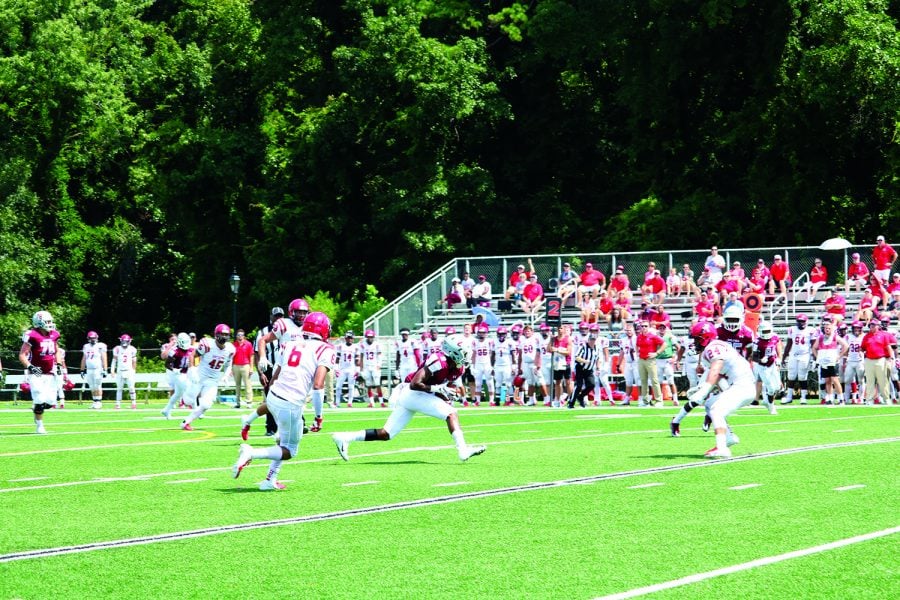 Senior wide receiver Desmond Marshall runs for a first down after getting his first catch of the season this past Saturday Sept. 1 at the Armfield Athletic Center. // Photo By: Abigail Bekele/The Guilfordian

A young Guilford College Quakers football team played three quarters of football against Huntingdon College before it was called as a no-contest due to a lengthy weather delay. However, Head Coach Chris Rusiewicz and his staff can use this game as something to work with for the rest of the season.

Junior captain and defensive back Reggie Williams discussed prior to the game that a prominent threat on Huntingdon’s football team is their All-American senior wide receiver Otis Porter. Williams said that to ensure he does not score, Guilford must guard and contain him effectively.

“We can’t let him take control and we have to get him where we want him to be,” said Williams.

Otis Porter was not the only issue for the Quakers. They were unable to put a stop to Huntingdon’s loaded offense, allowing three touchdowns in the first quarter. Huntingdon’s sophomore quarterback, Michael Lambert, proceeded to throw for 319 yards, including two 70-yard bombs, as the team tallied together over 500 offensive yards. Although unable to stop Huntingdon, Rusiewicz said that this is fantastic experience for his athletes.

“They’re out there working against their best every day in practice, which helps them improve and allows us to see those improvements,” said Rusiewicz. “This provides them with an opportunity to play for us this year based on what we see.”

Last year, Guilford began the season with a victory over Huntingdon, 38-24, led by star quarterback Karsten Miller’s dynamic playmaking. After losing multiple offensive weapons, including Miller, Rusiewicz scrambled to organize his Quakers and prepare them for a vengeful Huntingdon football team.

This year’s starting quarterback, sophomore Alex Manley, is a transfer student from Emory & Henry College. He did not have any starts prior to this game but was eager to set the tone for the season early and prove to his teammates he can maintain the legacy Miller left.

“When I first got here, they all welcomed me,” said Manley. “They made it easy for me to feel comfortable and at home. I have some big shoes to fill. I want to win championships here, so that means I have to raise the bar.”

Rusiewicz is confident in his new offensive personnel. He says that the work ethic and ability the athletes possess is important to the program for this year and those to come.

“It is an impressive transition in terms of the (offensive linemen) that are working together,” said Rusiewicz. “You have one senior, one junior, two sophomores, and a (first-year) starting for us. You can see that these guys that did not play as much last year are now being inserted into the lineup and it is going to come down to how well they gel and work together.”

A key man for the offense is redshirt senior running back De’Eric Bell, a two-time All-American who is third in the college’s history in rushing yards and is five touchdowns short of the all-time mark. Against Huntingdon, Bell showed his brilliance, scoring four times, three rushing touchdowns and a punt return, before the game was stopped and the statistics were voided.

The team has two big games marked on their calendar. They battle Davidson College at Davidson, North Carolina on September 15, and start conference play with a homecoming home game against Bridgewater College on September 29. However, to get to these dates, the Quakers must first host Methodist on September 8, where they are expecting another dominant win after defeating them 56-17 last year.