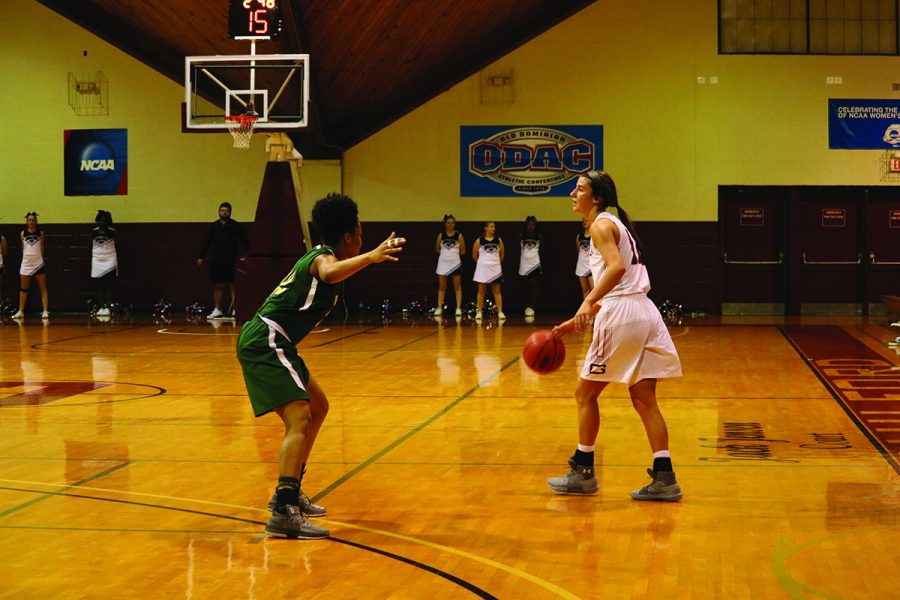 Senior guard Lauren Ramsey dribbles the ball against Hollins University during their game on Nov. 29, 2018. Ramsey averaged 16.3 points per game this season and was named to the First Team All-ODAC. //Photo by: Abigail Bekele/The Guilfordian

The Guilford women’s basketball season ended with a loss in the Old Dominion Athletic Conference tournament quarterfinals to Washington and Lee University on Feb. 22.

Although the season might have not ended in an ODAC championship like last year, it was still better than expected for this team.

The team trailed Washington and Lee by 17 points at half, after allowing the Generals to shoot 57 percent, while only shooting 32 percent.

In the third quarter, the Quakers cut the lead to 13 after a big quarter from first-year forward Monell Dunlap. Dunlap made a basket, pulled down three rebounds and made four-of-five free throws.

The final 10 minutes was a furious comeback for the Quakers as they tried to extend their season. The Generals lead was cut to four points with five minutes left after senior guard Lauren Ramsey made a layup. The Quakers could not tie the game, but got within one after first-year guard Jasmine McBride picked up a defensive rebound and then made a layup with nine seconds left. Generals first-year guard and ODAC Rookie of the Year Katie Popp made one of two free throws. Guilford had seven seconds left, down by two, but Ramsey missed a jumper with one second left, ending the season.

“It’s hard, it showed such great character,” said head coach Stephanie Flamini. “They could’ve just given up, but they didn’t, and that’s something that Lauren, Essence and Miracle were teaching the (first-years) all year, ‘you can’t give up, you can’t give up.’ We came up short, it was really heartbreaking, but at least they went out giving it their all and not rolling over.”

With being a young team, they had little experience in playing in large stadiums like the Salem Civic Center.

“The ODAC quarterfinals game was definitely a new experience. Playing at a civic center like that is definitely different than playing on our own court or even at another school,” said first-year center Julie Carini in an email interview. “It’s huge and there’s tons of stadium seats and just a totally new environment. It’s for sure a lot harder to play your best game at a place like that compared to your home court.”

After last year, the team had four of its five starters graduate, as well as many backups graduate or decide not to play this season. The team returned only three players from last year’s team that played a good amount of time.

Adding to the few returners was 10 first-years. With so little experience on the team, there was no time to get used to college basketball and they were thrown right into it. McBride and Carini started 23 of the 24 games this season. McBride even took over the point guard role when Abraham went down with an injury for a few games.

While some first-years did step up this season, the success of the team relied on the few upperclassmen. The lone senior, Ramsey, stepped in from an assisting role last year to being the focus of the offense. Abraham and Walters also moved into starting roles this season and had lots of success.

Walters averaged 14.7 points per game after only averaging 3.9 points per game last year off the bench. Her 56.1 shooting percentage was first in the ODAC and 16th in NCAA Division III. Not only did she improve her offense, she averaged 4.5 rebounds per game and 2.0 steals per game.

Ramsey ended her time at Guilford with her best season of her career, 16.3 points per game, 7.2 rebounds per game, 4.3 assists per game, and 2.5 steals per game, all team-highs. She was not only the team’s best offensive player, but the best on the defensive side also. Additionally, most games she had the responsibility of guarding the opponents’ best player. Ramsey was named to the All-ODAC First Team and D3hoops.com Third Team All-South.

“She was the glue that kept our team together throughout her time here, and then this year she really stepped up in the leadership role,” said Flamini. “She’s one of the only players, I’ve had a few, but wherever we went this year, everybody was talking about her, everybody was saying ‘what a great player that you have.’”

The team had many highlights this season as well as a few very low points.  After losing the first game of the season to Hardin-Simmons University, they won nine straight games before losing to Washington and Lee on Jan. 5. A big moment of that winning streak was a three-pointer in the last seconds of the fourth quarter against Oglethorpe University by sophomore guard Alli Jackson that sent the game to overtime.

A big loss for the team was the 53-52 loss on Jan. 24 to Roanoke College after beating Roanoke by 19 points on Jan. 3. The loss was bad as the Maroons finished in 10th place in the ODAC with only four conference wins.

The biggest win of the season was against Randolph-Macon College on Feb.10. The offense flourished in the 98-82 victory with Ramsey scoring 27 points and McBride scoring 15 and picking up 12 rebounds.

Next season the Quakers look to have everyone back except Ramsey and plan to add a talented class of first-years. The team might be returning many players next year, but there is a lot of work to be put in before the next season to improve.

Expectations for this year were low and the team surpassed them, but next season the team will have high expectations and must find ways to reach them.

“They can’t come back the way they are now,” said Flamini. “They have to improve.”