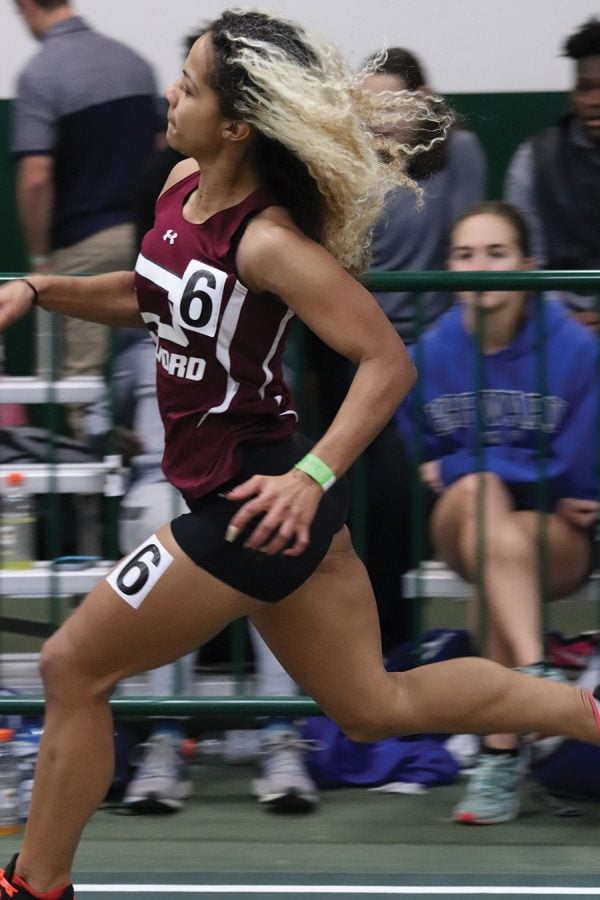 The athletes and Lindsay have created a powerful bond in the brief period she has been coach for the track team. Lindsay believes she has a unique method of training that she knows is working astoundingly.

“Success for me is defining a system that aligns with my holistic approach to training, maximizing on my strengths and building confident athletes in the process,” said Lindsay. When they believe in your process and trust in it, the bond is natural.”

Lindsay has experience coaching Division I athletes and competing at Division I. She went to school at Western Carolina University. So, the intense atmosphere that was fabricated from this meet was far from a shock for her. Lindsay says she was amazed by her athletes, seeing them compete the way they did.

“Guilford athletes are amazing, because not one of them backed down from a challenge, and I am sure they did not know at the time that they were the only Division III team competing that weekend,” said Lindsay.

Sophomore Cheyenne Wright, and senior Sommer Fanney, were two of many Guilford athletes that were up for the challenge.

Wright entered the meet with the mindset of competing against herself instead of the other athletes. Wright knew that the offseason training the team did would be enough to help them compete and excel and turned her race into a game of cat and mouse.

“It isn’t as intimidating when you begin to use these other athletes as target practice around the track,” said Wright. “Then, your race becomes a chase and in this scenario, you’re the predator. It’s not too long before you catch your prey.”

Wright has been striving to break the Guilford record for the women’s 400-meter since last year.  She says she would write the record time, 1 minute 7 seconds, down on her hand before every meet. Ironically enough, the first meet Wright forgot to write the time down, she wouldn’t have to anymore.

Entering the 400, Wright used her mindset of cat and mouse to her advantage. She broke the Guilford College 400 record with a time of 1:06.76, achieving the goal she had set since last year. Wright credits those around her for her accomplishments.

“After the completion of my race, I was completely unaware about breaking the record,” said Wright. “It wasn’t until I had cooled down and spoken with my coaches that I heard about my record. It truthfully was the most rewarding feeling to have felt after a year of hard work.”

Fanney runs the women’s 800-meter, an event she prides herself in by holding the College record, 2:27.67. She ran 2:33 at the ETSU invitational, topping all NCAA Division III athletes. But that isn’t all that she is known for at Guilford.

Fanney also holds the College record for the one-mile run with a time of 5:32.05, and four of the six closest times to that record. In the first meet this season, Fanney ran 5:39, already close to her record. However, these achievements do not affect Fanney’s personal expectation, and she only wants to enjoy the sports she competes in.

“I don’t think this creates any higher personal expectation for me,” said Fanney. “I always am just trying to do what I think I need to in order have fun and be a strong athlete. I do believe this past weekend’s meet was a great start for me for the indoor season, since the times I made this weekend were the fastest I’ve ever made at the start of the season.”

The women’s track team looks forward to competing at the Finn Pincus Invitational at Roanoke College on Saturday, Jan. 27.