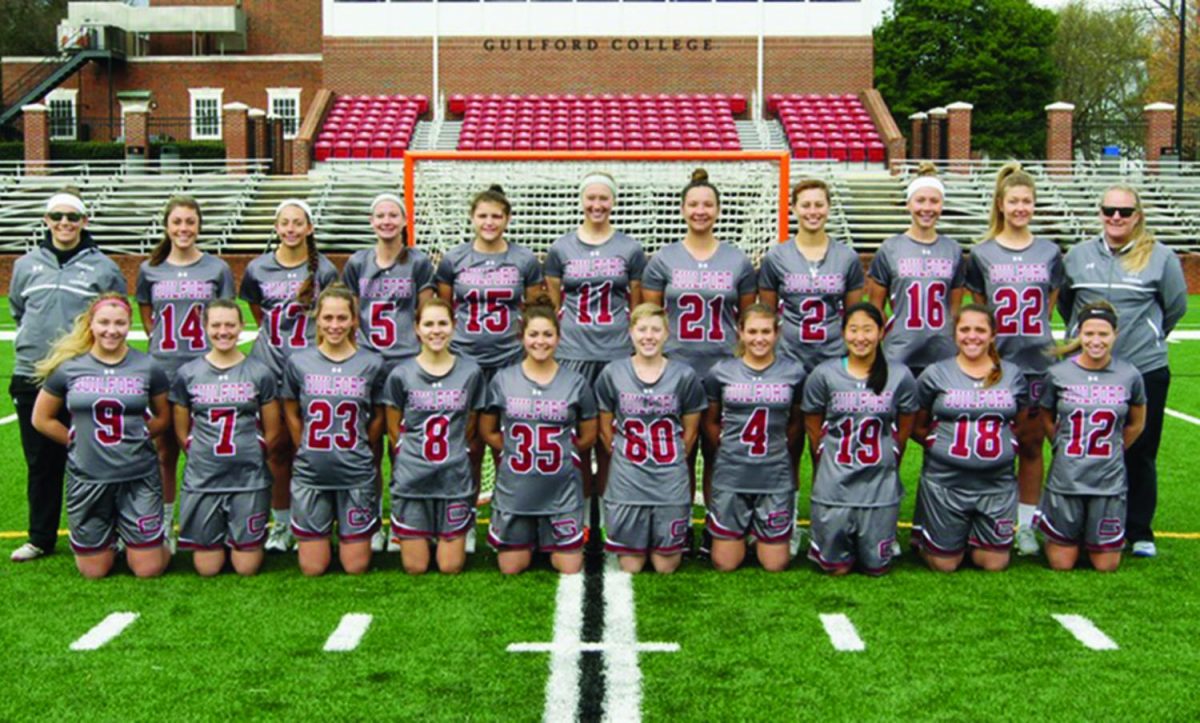 Former assistant women’s lacrosse coach Charlotte Dixon was recently named this year’s interim head coach of the Quakers. Dixon replaces Sarah Lamphier, who accepted an offer to be an assistant coach at NCAA Division II Slippery Rock University in Pennsylvania. The Guilfordian spoke with Dixon about her new position and her goals for the team this season.

Q: What brought you to Guilford College?

A: “I also operate a travel program in Greensboro for high school and middle school players. (Coach Lamphier) had been coaching with my program for a few years, so we knew each other well from that. When she needed an assistant coach, she called me and asked me to come on and I luckily was able to work it out. I have two little boys, so just time-wise I wasn’t sure about it. But I was able to work it out with my family.”

Q: What have you seen so far in the first few fall practices?

A: “The thing that I’ve happy about is the tempo of play. They’ve been playing really fast and working really hard in practice. Now, the little things like stick work are rusty right now because we are in the beginning of our practice season, but the pace of play is something that I’ve been excited about because that is a hard thing to accomplish. That’s one of the things that I really like from them so far.

Q: Is the mental or physical aspect more important when maintaining fast tempo of play?

A: “I think it’s a little of both. I think it’s just getting used to someone requiring you to keep that tempo and the way we structure practice makes the tempo higher. But fitness is another thing we are starting to get into now.”

Q: Things can get scattered and sloppy when playing fast. How have your players adapted to the tempo?

A: “One of the things I tell them is play quick, play fast but don’t play in a hurry. That’s definitely something we are getting used to. They are playing at a great tempo, but we are working on making good, quick decisions while playing at that tempo.”

Q: What players have you looked to as leaders on the team?

A: “We don’t have captains right now, but what we do is have Accountability Groups. Each of our four seniors (Sarah Sedaghat, Taylor Campellone, Carter MacLeod and Kelly Martin) all have five or six players on their “team” that they are responsible for. So they are really our four leaders for the fall and we will talk about captains a little later into the season. They are doing a really great job so far. All four of them are bought in and really great on the field, but are also doing a great job of keeping everybody accountable and doing what they need to do.”

Q: You experienced a lot of success at Greensboro College. What philosophy do you want to bring to this team?

A: “I preach to them the culture of hard work, and I think that goes a long way. When you are a team that is known to work hard and that’s what you expect of each other and your coaches… and everyone in the program is bought in to working hard, that’s the foundation for learning the game the way we want to teach it. I think that’s something this team has done a really job of this year. They really hold each other to a standard that they can be proud of.”

Q: How you compare the level of competition in the Old Dominion Athletic Conference to the USA-South Conference?

A: “(The ODAC) is really strong. I think the USA-South is getting broad now and there are some teams that are strong. But the ODAC also had the number two team in the nation last year. That’s something I tell my players all the time then, that there’s no reason that we couldn’t be a nationally competitive team. That’s the goal. Being in the ODAC, we get that high level of competition that could help us get recognition. Be on the lookout for us in years to come.”

Q: How do you feel about the culture of Guilford?

A: “My husband and I joke that I have found the perfect fit for me. The seven core values of Guilford are really things that I hold true to myself. The culture of inclusiveness and diversity and all the things important to Guilford are also important to me. It feels like home to me.”

Q: There have been recent events on campus that involved public safety. How do you keep your players focused despite events and buzz around other things off the field?

A: “Last year, some things were coming up on campus. Something that we really preached to the team was that we want them to have their own opinion. We want them to own their voice, but be able to do it in a respectful way. The thing that I love about my team is that we have such diversity in opinions. We encourage them to share their opinions, talk to each other and make their opinions known, just in a respectful way. I think they have done a good job of that so far.”

Q: How do the upperclassmen communicated with the first-year players?

A: “This is the reason we put in the Accountability Groups. There’s a senior in charge of each group, but players of each grade level are mixed in. This started in the summer, so they got to know each other a little bit. The first-years all had upperclassmen they could go to if they had questions or concerns coming into the College.”

Q: What do you look to improve on from last season?

A: “Last year, we had injuries that plagued us. Something we are trying to do is make sure everybody is fit enough in the fall, so when we get to the spring, everybody is strong and feeling good so we don’t get injuries like that again. Having a bigger team this year will also be helpful. We face teams that have a lot of numbers. Lacrosse is a running sport, so having a steady rotation of players in and out will be helpful to us. I’ve tried to be very forward looking and this is a completely different team that we had last year. What I want to focus on is fundamentals. You have to get your stick work right, you have to be able to shoot, you have to be able to do all these things the correct way and then we’ll build off that.”