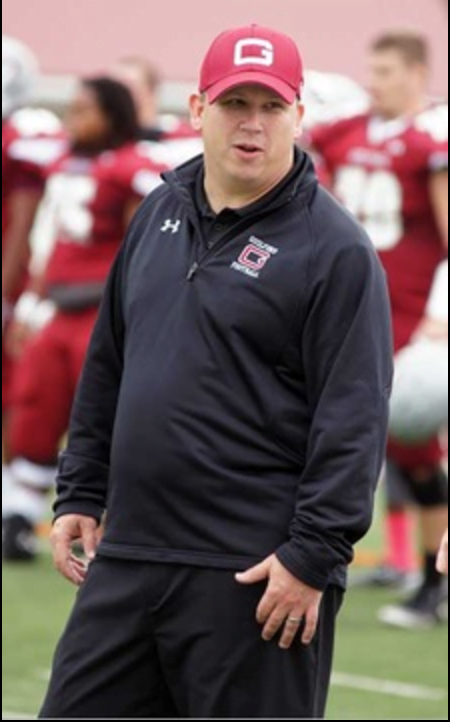 After a disappointing 4-6 season last year, following a school-best 9-1 year in 2015, Guilford’s football team looks to get back to the culture and gameplay they had during their success. The Guilfordian sat down with head coach Chris Rusiewicz to discuss his goals for his seventh season leading the Quakers.

Q:     How was this preseason different from the last couple years?

A:       “They’re all different. I think this year’s preseason was kind of a really good mix of the last few years. One of the things that we went into the offseason with at the end of the 2016 season was more of the ‘Let’s get back to our roots and keep rebuilding on the culture.’ We did that, and I think it carried over all summer right into preseason which with our new freshman class coming in, you always wonder how the upperclassmen and (first-years) are going to connect. People ask me what’s the hardest thing about being a head coach and I say it’s bringing in 100 plus young men from all walks of life to become one and unified. I think that our upperclassmen did an exceptional job of embracing those (first-years) to prepare them to understand our culture. Even though they understood it, we still had to build it because the (first-years) had to see it from that perspective as well. So, I think that this preseason was special in the sense that I felt we had that.”

Q:       How would you describe the play of the first-year class this year?

A:       “I think our class, in terms of talent and ability, is one of the best classes we’ve brought in from top to bottom. You look at a lot of these guys coming in and they were competing from day one and a lot of them will be playing in our first game. So, I think it shows these guys were willing to come in and work hard. They got the message from the upperclassmen that if you work hard and do the right things you’re going to have an opportunity and a chance right away.”

Q:       What are your thoughts on being ranked sixth in the preseason poll this year?

A:       “Whether you’re ranked first or sixth or seventh or anything in between, it’s a preseason opinion. Most of those preseason polls are picked based on how things were the year before. We’ve been picked first and finished second, we’ve been picked last and finished third. That means nothing to me and I hope it means nothing to our program. What matters is how you finish at the end. If anything, it just takes pressure off the ‘have to do’ versus the ‘want to’.”

Q:   Where did the idea of traveling down to Florida to play Jacksonville University come from?

A:       “Well it came from them reaching out to us. From when I got here in 2011, one of the things that I wanted to do for our program was to establish Guilford College football. We already understand we are a good academic institution. We compete against a lot of academic schools and I wanted to continue to build off of that. I also wanted to build our opponent’s’ prestige. I wanted to up our opportunity to play against some top-level programs, not just on the field but even academically. I’ve been trying to get Campbell University and Davidson (University) on the schedule since I got here. When I had the opportunity to get Davidson on the schedule, I think that perked up Jacksonville University as a team from the south that was willing to play high level opponents. The opportunity to take our schedule to another level was exciting for me as a coach.”

Q: Are there any teams that you are anxious to compete against this year?

A: “Well the politically correct answer is you take it game by game. The years that we continue to build on culture were the years that we took it day by day. I’ll be honest, this offseason was like that. We started to prep for Huntington (College) and that’s where our focus was. I wouldn’t say that we are excited about any particular opponent, I think I’m excited to coach football, our players are excited to play football and we get a minimum of 10 games.”

Q: How do you think travel impacts the players?

A: “As a coach, and even as a player when I played, I did appreciate the road games as much as home games. Home games are nice because you play in front of your community, but I think away games are just as equally nice. It’s a different environment, it is fun to go and win on somebody else’s turf. The one thing that does get you is the travel. It’s just like when you’re on vacation. When you get there, you’re excited, everything is great, then you turn around and come home and you’re tired. But then we got to get ready for another game in about four or five days. They knew about this four-game road stretch and I think it is going to prepare for the four home games at the end of the year in which four of our six conference games are at home.”

Q: There is word around campus that Calvin Hunter, who is reportedly one of the best Quarterbacks to come through Guilford College in the 90s, is coming here to teach. Do you think you will try to reach out to him to get him to speak to the team later in the season or potentially assist coach the team?

A: “I’m always looking for new voices to speak to our players about leadership, motivation, and encouraging words. Sometimes it’s tough conversations that these guys need to learn about society and anything in general. My voice gets old to them at times. I speak every day to them. I know they appreciate it, but anytime you can bring a new voice in, I think it only benefits. Yes, the time will come to have conversations with people like Calvin to come in and talk to these guys.”