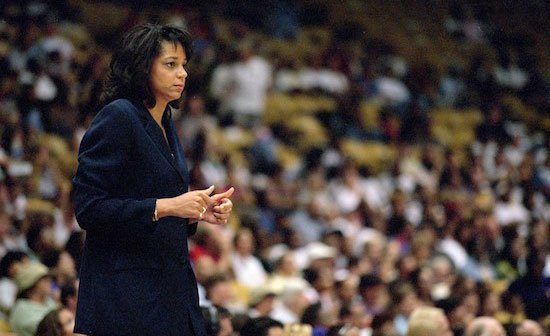 Carolyn Peck didn’t realize she was the first African-American female coach to win a national championship until a reporter told her so in 1999. She was the head coach of Purdue University’s basketball team at the time and saw an incredibly successful campaign while training the team.

Although her victory represented a huge change for minorities across the country, it would take another 25 years for history to repeat itself. On April 2, Dawn Staley became the second African-American female coach to win a national title in college women’s basketball.

Staley went to three Final Fours asa player for the University of Virginia. Two weekends ago, as the head coach of South Carolina, she led the Gamecocks over Mississippi State University, 67-55. Her determination and triumph would only be overshadowed by questions concerning the lack of diversity in head coaches all around the country.

In the same week of Staley’s victory, ESPN released the 2016 College Sport Racial and Gender Report Card. The data showed that college sports received a combined grade of C- in 2016 with 76 points for racial hiring compared to an overall B with 81.2 points in 2015.

“You can see that college athletics as a whole are really not doing a good job of providing coaches who are nonwhite,” said Sports Information Director and Assistant Athletics Director David Walters. “Actually one of the points of the (ESPN) article is that data from 2016 compared to 2015 is worse, which is really surprising.”

At Guilford, Jamie McNeair-Reese is the only current head coach who is also a person of color. She has just recently started training the women’s track and field team, but being a minority on campus is not McNeair-Reese’s main concern.

“I can’t say that being the only African-American head coach on Guilford’s campus has yet been a challenge,” she said in an email interview with The Guilfordian. “The bigger challenge has been being a new coach and transitioning into a new environment.”

The athletes that work with McNeair-Reese agree that the new coach has not had enough time to show her full potential yet.

“It’s been too early to tell,” said junior Sommer Fanney. “She trains the sprinters, and I think there’s one athlete that was training under her that broke her own personal record for the first time in a long (while), which was the result of working with Jamie.

“She’s been good to the morale of our team in some ways because just having someone with a different area of expertise just freshens things up.”

To other student-athletes of color who have not had a head coach who is a minority, what really seems to matter is whether the coach can do their job.

“I think it’s fine honestly,” said junior Jordyn Brown who plays basketball since her first-year at Guilford. “I see (my coaches) by their coaching abilities and how they coach their team.

“I believe it could somewhat be empowering for students of color but I also feel that it doesn’t really matter to them. What matters is can they coach or not.”

For those interested in coming to the College and coaching a team, Guilford’s website states that applicants from different backgrounds will be taken into consideration.

“I don’t sit in the hiring process,” said Walters. “ (But) I know the college as a whole has in every job posting on the human resources page of the website … they have a statement that says ‘we’re committed to a diverse pool of applicants.’”

For McNeair-Reese, Guilford has been doing a great job so far and her students already represent how diverse the College is.

“From my observation(s), it appears that female coaches and female coaches of color are underrepresented in the world of sports,” she said. “(But) it’s refreshing to see that Guilford College is making a conscious effort to establish some parity within the athletic department’s staff.

“In my opinion, the track team is a small reflection of the diversity that is present on Guilford’s campus, and I anticipate that the growth of the staff for both the men’s and women’s cross country and track teams will also reflect that diversity.”