Baseball team to show off skills at ODAC 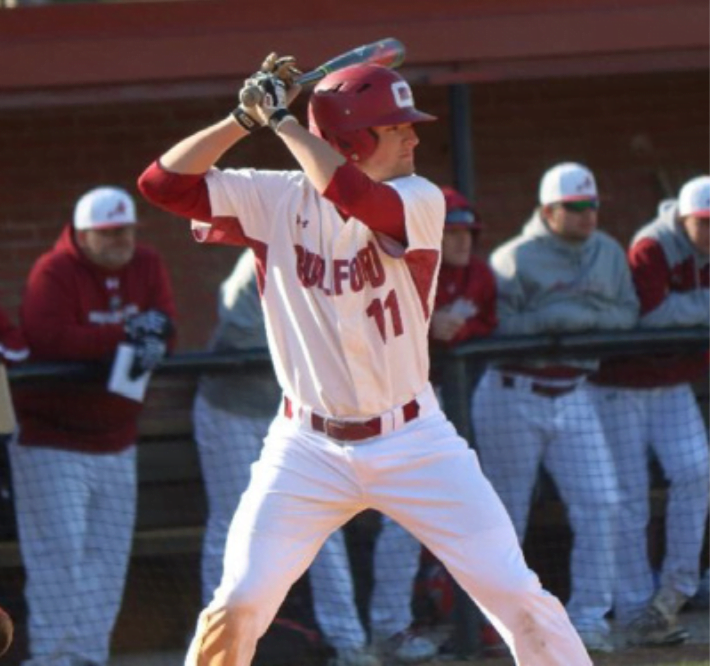 Guilford’s baseball team has been challenged each week in the Old Dominion Athletic Conference. The conference is home to two ranked schools in D3baseball.com’s Top 25 poll, including top-ranked team in the nation, Shenandoah University. But to further emphasize the difficulty of playing in the ODAC, Shenandoah is not even the top seed in the conference currently.

The conference games act as ways for players to step up and showcase their skills, which they have done according to head coach Nick Black.

“A lot of seniors have done well for us,” said Black. “A lot of them have stepped up this year.”

Black has been impressed by his men on the mound. Senior right-handed pitcher John Todd’s .247 ERA is good for eighth in the ODAC. He ranks second in the conference with 60.2 innings pitched, and his 46 strikeouts this season is a conference best.

Senior right-handed pitcher Logan Jones has also been big for the Quakers, despite stepping into a new role.

“Logan Jones is a guy who we converted to a pitcher this year as a senior,” said Black. “He’s our third-leading innings guy. He’s thrown the ball really well for us.”

Jones posts a .346 ERA, which is second best on the team of players who have pitched at least an inning per team game and also ranks 12th in the conference.

From a hitting standpoint, Guilford is at the top of the ODAC with 68 doubles, and their 174 team runs batted in ranks fifth.

The Quakers are led by junior transfer from Pitt Community College, Trevor Denton, and senior Rocco Wilcox, who have 47 hits a piece this season, good for third in the ODAC. First-year Logan Washle has been a new face that has stepped up for the team as well.
“Washle has been huge for us,” said Black. “(He) has started in right field for us all year.”

Washle has 39 hits with seven doubles and 17 RBIs in his rookie campaign, while maintaining a .351 batting average.

Despite the statistical feats, the Quakers find themselves tied for last in the conference at 3-9. However, the season is far from finished.

“We are still in the hunt to get in that six-team tournament,” said Black. “That’s a goal every year.”

In order to make it happen, they will need to execute. Nine of the Quakers’ 15 losses this year were decided by three or fewer runs, including two, single-run losses in a doubleheader against Shenandoah on April 1.

“Baseball is a game of failure,” said Black. “It can break your heart a lot, you know. That’s why you got to have a short memory and keep going and getting after it.

“Our main goal is focusing on what we can control. There’s so many things outside of your control in baseball: fair or fouls and umpire calls. I mean, there’s just a lot that can slip away from you, but our guys have done a good job bouncing back after those (losses) and responding.”

Black has preached to his team to keep playing their game and keep looking to the next game.

“I’m proud of our guys and the way they’ve battled this year,” said Black. “There’s been some close ones that got away from us, but that’s just baseball.

“You play 40 games, so you can’t let things get to you. Just got to keep moving forward.”

Guilford returns for a home doubleheader with Washington and Lee University on Saturday, April 15.