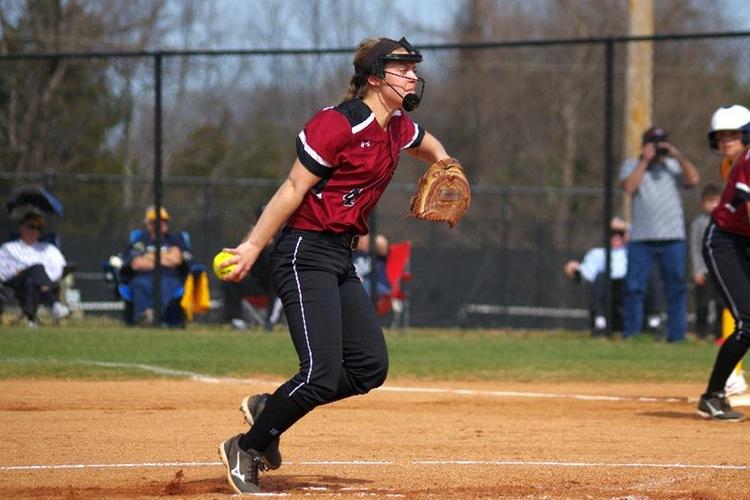 Strong out of conference play from the Quakers’ softball team has helped them start the season off with a convincing 12-3 record. Their next goal: perfection.

The team is always looking improve and minimize their mistakes. However, with the way they are playing now, head coach Dennis Shores is having troubles finding struggles.

“I’m blessed to be able to coach this team,” said Shores. “The team works really hard and have avoided distractions and I’m proud of them staying focused.”

The Quakers will have their first conference matchup at Shenandoah on Saturday, March 12.

Prior to conference play, the Quakers’ overall record sits them in second place behind Virginia Wesleyan College (14-0), who is currently ranked 11th in the latest National Fastpitch Coaches Association’s Division III poll.

A strength of the Quakers this season has been their pitching.

“Pitching has been stronger than it ever has been,” said assistant coach Anna Mitchell.

Junior right-handed pitcher Courtney Lackey has led the team on the mound. Her five wins sits third in the Old Dominion Athletic Conference. She also ranks fifth in the conference with 30 strikeouts.

Mitchell noted the improved pitching she has seen from left-handed senior Rebekah Langston.

“She had some rough patches in the past,” said Mitchell. “She won a big game for us against Averett. I’m very proud of her starting her senior year on such a positive note.”

“She throws hard and has good movement,” said Mitchell. “It will be good to have her for the next three years.”
Hunt is 3-0 thus far and also earned a save this year. Her 16 strikeouts ranks 11th in the ODAC.

Not only has pitching been strong, but the team’s hitting ability has propelled to sweep five of their seven doubleheaders thus far. In the Feb. 26 matchup with Mary Baldwin College, the Quakers tallied 24 hits which all led to runs, culminating a 24-0 victory.

“Twenty-four hits in a game is unheard of,” said Mitchell. “Hitting has been a big part of our success.”

Sophomore outfielder and pitcher Makayla Carver led the team going 4-5 with 5 runs batted in. Carver is fourth in the ODAC with 14 RBIs so far.

“They have went above and beyond,” said Mitchell. “Their speed and hitting ability has been a big factor for us. It surprised me that they were able to step up that way.”

Sophomore infielder Katy Holt has three home runs for the Quakers, ranking second in the conference. The Quakers as a team have a conference best 14 home runs.

What has stood out to the coaches as well is their team’s mental game. Their focus has been a big part of their success, especially in doubleheaders.

“Their mental game is getting stronger,” said Shores. “It is a lot stronger than it was last year. I’m seeing a lot of them wanting to learn more.

“If you strive and try to learn new things, you’re helping yourself. You’ll get better.”

The Quakers will host defending ODAC championships Virginia Wesleyan in a doubleheader on April 2. The Marlins ranked first in the ODAC preseason poll.

“You have to be on your A-game for seven innings,” said Mitchell. “It’s not going to be a blowout or easy game. You cannot have an off inning, and in doubleheaders, you have to play a full 14 innings. Against teams like this, you can’t slack in any area.”

Shores also touched more on the importance of focus.

“Focus is a key to winning,” said Shores. “Sometimes if the focus decreases a little bit, it leaves the opportunity for mistakes and errors.”

“We strive to work hard every day at practice,” said Carver. “Our team mentality has been to work hard and to win ODACs.”

The Quakers have seen substantial improvements in their chemistry.

“This is my third year, and for the first time I feel like we are all finally on the same page,” said Mitchell. “For it to be this early in the season, that says a lot.

“They get along well. They all seem to be one.”

At the end of the day, everyone on the team comes together under the common goal of winning the ODAC tournament.

“The chemistry between us great,” said Carver. “We know how to keep our personal lives off the field and come ready to focus and work hard.”

The team’s strong play has served as a catalyst for the coaching staff, who believes in their chances of making a strong conference run.

“Every win that you get is a step closer to the NCAA tournament,” said Mitchell. “With the way we are playing right now, there’s a strong possibility of us winning (big) games.”