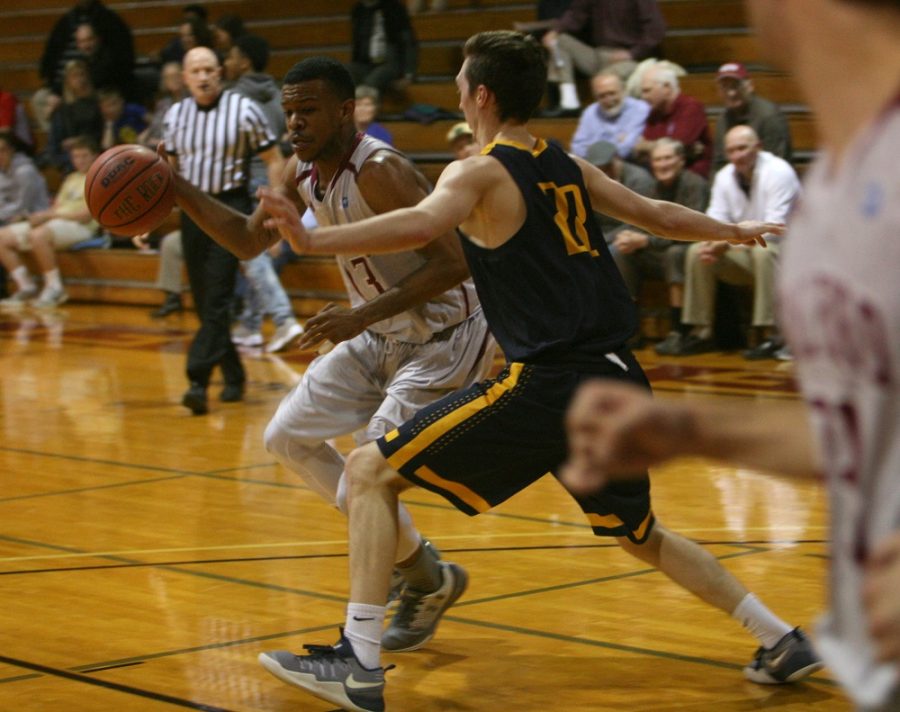 Guilford College guard/forward Dominique Henderson drives past Emory & Henry College guard John Shelor in the second half of the Quakers' game against the Wasps in Ragan-Brown Field House on Wednesday, Feb. 15, 2017. Senior Henderson scored five points and had five rebounds for the Quakers during Senior Night. The Wasps beat the Quakers, 65-60.

The Quakers have seen injury, a double-overtime loss by three and offensive struggles. But in the end, they are No.1.

Guilford’s 63-57 victory at Bridgewater College on Feb. 18, was their 20th of the year and cemented their spot at the top of the Old Dominion Athletic Conference for the first time since 2009.

“Being a senior, it is a huge accomplishment to have the number one seed,” said team captain and point guard Zachary Houston. “All that matters now is the ODAC tournament. We just have to take each game one at a time, play as hard as possible and lay it all out on the court.”

Head coach Tom Palombo earned the Bob Johnson Coach of the Year award. This is his fourth time receiving the honor, tied for most all-time in the conference.

They began the season with a shaky win over crosstown rival Greensboro College, 62-59. The Quakers shot a measly 26.5 percent from the field but made up for it with effort on the glass, collecting a season high 70 rebounds. They began to find their rhythm in the next game, earning a commanding win over University of Texas at Dallas in the first round of the Guilford College Invitational.

The Quakers took on the, at the time, 15th ranked team in the nation, Emory University, in the Guilford College Invitational championship. A long fought battle, the Eagles came out with a 69-66 victory over the Quakers in double overtime.

“I will say that, after the Emory game,…you could tell we had a group that did not want to lose, and they would do anything to win,” said assistant coach Ronnie Thomas.

And win they did.

Through both December and January, the Quakers lost only two games, largely due to strong work on defense and on the glass.

“We try to hang our hat on rebounding the basketball and playing team defense,” said Thomas. “(We) really try to focus on those two things the most.”

On Feb. 6, the Quakers finally broke the D3hoops.com top 25 poll, ranking 22nd after looking in from the outside for ten weeks. The glory was short lived, however, as they dropped a road game to conference rival Roanoke College two days later. The Quakers were without sophomore forward Marcus Curry who had been recovering from a foot injury. Curry leads the team currently in field goal percentage, playing a major role in the team’s offense.

In that game, senior guard Michael Reiney hit Guilford’s lone three-pointer, while the team gave up 18 threes to their opponent.

“I think we had a few (games) get away from us this year,” said Houston. “Every game is tough in this league, and you have to be on your ‘A-game’ every night. Some of these games, we struggled to play up to our abilities, and it cost us.”

Despite the struggles, Thomas applauded his team’s ability to work together in achieving their goals, where the next man up realizes he has to be ready to go.

“All the guys have been special,” said Thomas. “Each day, they make it fun. Every player has established their role in some way throughout the year that goes beyond just the games.

“Some roles are bigger than others, but they all hold equal value to the team.”

In the roller coaster month of February for the Quakers, they bounced back from Roanoke, taking down the then top seed in the ODAC, Randolph-Macon College on Feb. 11. Guilford won at home, 67-53.

With the regular season over, the ODAC tournament is the main focus.

“We have to win three games to win this tournament, but it takes a lot of effort, toughness and grit to win just one,” said Houston. “We have the ability to win the tournament, but we have to play our best basketball each game to have a chance to win.”