ACC Tournament to move away from Greensboro 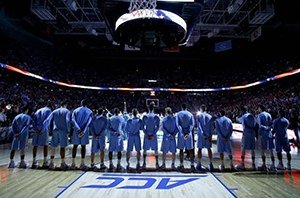 Since the formation of the Atlantic Coast Conference in 1959, the city of Greensboro has become a staple for the men’s and women’s basketball tournaments. Despite changing locations throughout ACC country, the city has hosted the tournament five of the last six years.

With the ACC tournament being held in Greensboro, the event brings in a sizable amount of income to the City of Greensboro. Many families, teams and ACC representatives stay in local hotels, eat at restaurants and tour the city during these two weeks.

For the 2015 ACC tournament, there was an excellent turnout with both the men’s and women’s championship games selling out. Notre Dame defeated North Carolina 90 – 82 in the men’s tournament while the Fighting Irish also took the women’s title in a 71 – 58 win over Florida State.

With the original scheduling of the men’s tournament to have begun on Wednesday, March 11, and end on Sunday, March 15, ESPN, the ACC decided to change the time so that the championship game would be on Saturday night in prime time. Thus the new schedule began on Tuesday, March 10, and ended on Saturday March 11.

“The reason the schedule was changed for the men’s tournament is because ESPN wanted the games to be aired at certain times,” said sophomore ACC intern Pat Charvat in an email interview. “Because of the contract with ESPN, the ACC had to compromise and move the tournament ahead a day.

“When it comes to attendance, I don’t think it really made a difference this year. Since it is such a big deal, people are going to go regardless of the day, especially with three of four North Carolina teams playing multiple days of the week. The stadium will be packed regardless of the day.”

The fans of in-state teams will soon see this change.

The current layout the ACC has for the men’s tournament will put it in Washington, D.C., in 2016, Brooklyn in 2017 and 2018, then Charlotte in 2019 before returning back to Greensboro in 2020. This could potentially cause a significant financial impact to the city of Greensboro.

However, the women’s tournament will still be held here in Greensboro for the time being.

It is not just the revenue aspect that the City of Greensboro will be impacted by with the loss of the men’s tournament.

“The ACC, players and families all stay in roughly seven different hotels that are close to Greensboro Coliseum,” said sophomore ACC intern AJ Pasquale. “It is obvious the tournament’s absence will be felt by the hospitality industry around Greensboro.”

Obviously the city will do what they can to fill the void of the ACC tournament, but in reality, the tournament’s absence will be felt until it returns in five years.