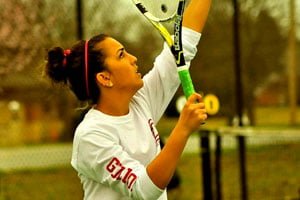 Guilford athletes are gearing up for the spring sports season in the Old Dominion Athletic Conference. Guilford’s spring teams are all looking forward to a strong season.

“Last year we were a little bit of an underdog because we were young, and people didn’t know what to expect,” said Mirabelli. “Now we aren’t that, and people are saying ‘Okay Guilford, they’re gonna be good this year.’”

Building off a strong 2012 campaign, the golf team looks to take it one step further.

“Our team goal is to win a national championship but first the ODAC because that’s how we get to nationals,” said first-year Michael Almonte.

The lacrosse team has been working on their fundamentals to improve from their subpar 2012 season.

The team is bolstered by a strong, experienced defense.

“The introduction of a really large, really talented freshman class is the key to the season,” said sophomore Sam Cole. “We have a lot of kids from around the country. I think the game most of the guys are looking forward to is revenging last season’s loss to Greensboro (College). We want that game back and we want some blood.”

Head coach Sarah Lamphier believes that the way the team handles adversity will determine how well the season goes.

“I’ve been really impressed with their chemistry,” said Lamphier. “They very much enjoy each other’s company. It doesn’t matter if you’re a first-year, senior or junior, they all get along and want to spend time with each other.”

The softball team has worked on pitching and key hitting this offseason. The team is much deeper than in years past.

“The team goal is to win the ODAC,” said Shores. “Although they ranked us to finish 9th, never wake a sleeping dog.”

The tennis team faces high expectations as they were ranked 3rd in ODAC preseason polls. First-singles Turner Votipka has worked on his core to prepare for the season.

“We have a really hard season ahead of us,” said Votipka. “I’m just excited to play these really tough guys who are good players and can challenge me.”

The tennis team has a strong mix of young players and veterans. Their season starts on Feb. 15 against Virginia Wesleyan.

“I think (Kim and Natalie) are really good captains and we can tell them things, they are really open with us,” said second-singles first-year Allie Guy. “We have good communication between the team and the captains.”

First-year Sherod Johnson cites his coaches for his improvement as a runner and student. Johnson is excited to be transitioning from winter track to outdoor track, where he believes he thrives in the warmer climate.

“The Cashes have helped me academically and have gotten me to where I want to be physically,” said Johnson. “They’ve put me through a series of weight training and have made me stronger mentally.”

Sophomore captain Jodie Geddes is excited about the ODAC Division III championships on Feb. 22. The team has two record breakers with Jennifer Thomas and Jasmine O’Neill in the 200 and 800 meter events, respectively.

“We finally have a large enough team that we can get as many points as possible,” said captain junior Jodie Geddes.

“I think we can take the ODAC. We should.”